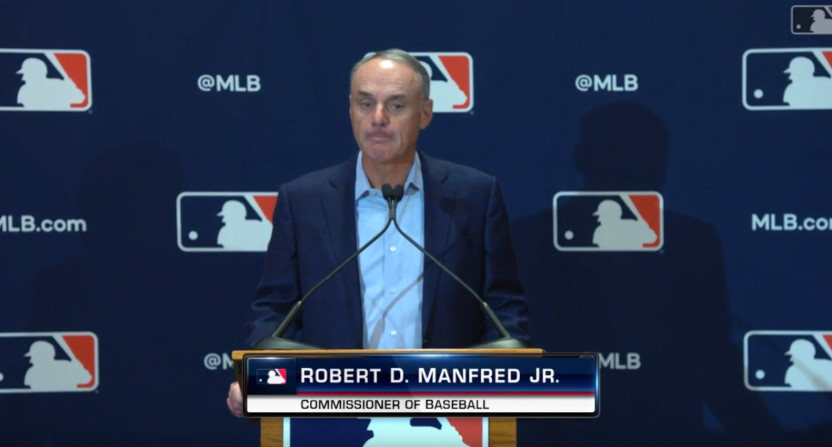 MLB commissioner Rob Manfred’s handling of the Houston Astros sign-stealing saga has come with a lot of criticism, from his limited punishments, to his “piece of metal” description (to ESPN’s Karl Ravech) of the Commissioner’s Trophy (awarded to the World Series champion) when asked why he wouldn’t strip the Astros of their 2017 title, to his sarcastic “Nice reporting on your part” criticism of The Wall Street Journal‘s Jared Diamond (who actually did some very nice reporting, relaying facts on the scandal from a letter Manfred sent to the Astros that were omitted from his final report and public statements and contradicted some of Manfred’s remarks).

One of the most notable parts of this comes around the 15:07 mark, where Carson Field of Cronkite News (the news division of PBS Arizona, operated by the Walter Cronkite School of Journalism and Mass Communication at Arizona State University) asked Manfred, “Compared to the other scandals in baseball’s history, why do you think the outcry for this one has been arguably the largest?” Here’s that specific clip:

Commissioner Manfred’s response to my question on why the sign-stealing has sparked more outrage than other past baseball scandals. (courtesy of @KTLA)

Here’s a transcription of what Manfred says:

“I think that part of it is the way society has evolved. It’s a very different world than 1919. But I think more fundamentally, this activity relates to the play of the game on the field in a way that is tangible for our fans and has touched a cord of unfairness with our players that has made it a very big story. And it is a big story, we understand that, we understand it’s a serious issue, and we’re really committed to doing everything we can to restore faith in the integrity of the play of the game on the field.”

Citing “the way society has evolved” is not a great way to start addressing the severity of this issue, and why so many people (from fans to players to even NBA star LeBron James) are so upset about it. It even brings up memories of the end of the old Monty Python “Dead Bishop On The Landing” sketch, where an arrested murderer says “It’s a fair cop, but society’s to blame” and the church police then let him go and say “Right, we’ll arrest them instead”:

Yes, it is a different world than 1919 and the “Black Sox” scandal. But there was tons of outrage about that scandal at the time (and it led to lifetime bans, not the complete lack of punishment for players from Manfred), and there would be tons of outrage about it if it happened now. Similarly, while there have been various sign-stealing schemes over the years, they generally haven’t been of the sophistication and scale used by the Astros, and while their specific scheme couldn’t have existed at most points in baseball history thanks to the technology involved, it doesn’t seem fair to say “People are only mad now because society has changed.” It recalls the Matt Bors “Yet you participate in society. Curious!” comic.

And while Manfred’s answer gets slightly better from there, especially when he admits that it is a “big story” and “a serious issue” (after first saying it’s the reaction from fans and players “that has made it a very big story”), this still isn’t a great look for him. Oh, and this press conference also involved Manfred saying the Astros used this scheme throughout the 2017 postseason. That’s in contrast to recent comments from Astros’ player Carlos “We won fair and square” Correa, so it’s a “big story” indeed:

So like… why didn't you strip them of the World Series title then? pic.twitter.com/aXpjSTBjrm

But hey, at least Manfred apologized for his “piece of metal” comments about the trophy!

Rob Manfred really just had the audacity to say, “I made ONE mistake.” GTFO with that. This clown needs to resign, effective immediately. pic.twitter.com/0Ybm3e6Z6S

“I have to say I made one mistake, at least, during that long day. And that was, in an effort to make a rhetorical point, I referred to the World Series trophy in a disrespectful way. And I want to apologize for that. There’s no excuse for it. I made a mistake. I was trying to make a point, but I should have made it in a more effective way. And again, I want to apologize for it.”