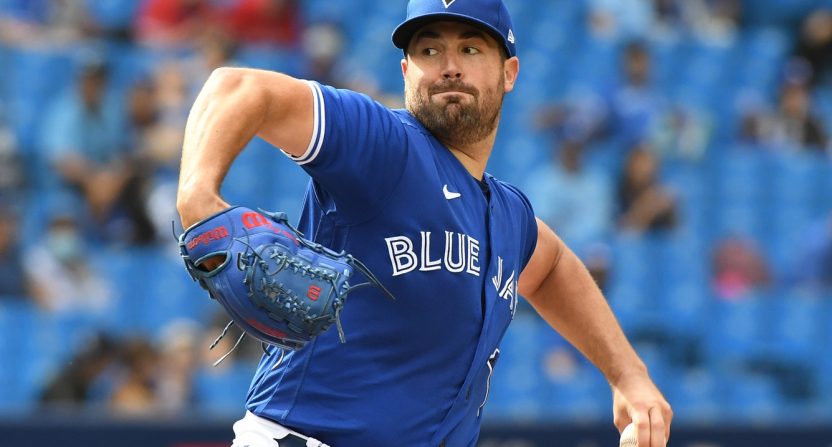 2021 American League Cy Young winner Robbie Ray has cashed in, signing a five-year, $115-million deal with the Seattle Mariners, according to Jeff Passan.

Reigning AL Cy Young winner Robbie Ray and the Seattle Mariners are finalizing a five-year, $115 million contract with an opt-out after the third season, sources familiar with the deal tell ESPN.

Ray dominated the American League with the Toronto Blue Jays last season, leading the league in ERA, starts, innings, WHIP, and strikeouts. Finishing 13-7, he won the Cy Young in a near-unanimous vote, receiving 29 of 30 first-place votes. It was quite the turnaround from the previous season when Ray finished 2-5 with a 6.62 ERA between the D’backs and Jays.

The Mariners will be Ray’s fourth MLB team in his eight-year career, joining the Detroit Tigers, Arizona Diamondbacks, and Blue Jays. He was also drafted by the Washington Nationals organization but never played for the team in the big leagues.

The Blue Jays will receive draft-pick compensation for the move because Ray rejected their qualifying offer earlier this month.

For the Mariners, it’s a big move as they attempt to build on the momentum of a strong 2021 season that saw them just barely miss the playoffs. They’ll also need to keep pace with the Houston Astros, who won the AL West and played in the World Series.

Meanwhile, reactions are in from MLB folks on Twitter and they’re pretty positive overall (unless you’re a Toronto fan).

Time to get ready for loud grunts and LOTSSSS of punchouts @Mariners fans! 💪🏻💪🏻💪🏻 https://t.co/NFtko2ZExB

Ray was as accessible, agreeable + as forthcoming a superstar I've worked with over the years in pro sports.

So often, 1-on-1, he'd give questions considerable thought before providing insightful answers. Appreciated that glimpse into the mind of a 'just a guy' turned Cy Young https://t.co/g6mdM8jXI8

First the Cy, now the bag. Robbie Ray parlayed a brilliant season with the #BlueJays into a payday. He lands in a pretty perfect spot, Seattle, with a big park and another ascending young core: https://t.co/NQgVfeKeoE

We’ll see if Ray will be able to follow up his Cy Young season and prove he can be a consistently great pitcher. If so, he might just give the Mariners what they need in order to make the playoffs for the first time since 2001.