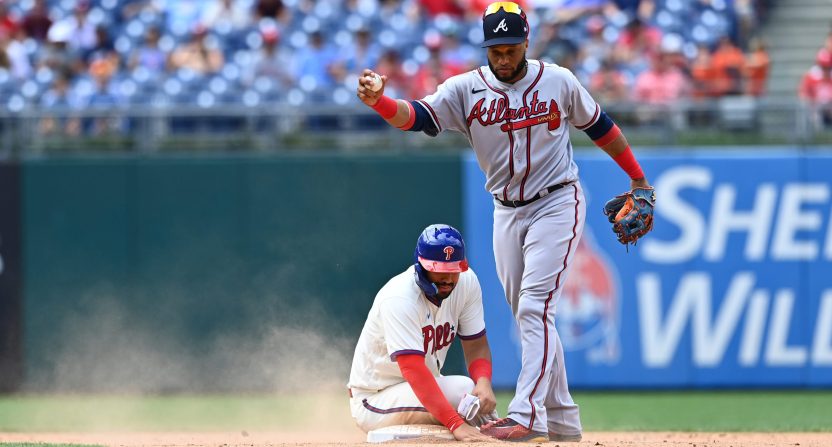 It has been a whirlwind of a season for eight-time All-Star Robinson Canó, who saw himself on his third team with the Atlanta Braves after being designated for assignment by both the New York Mets and San Diego Padres already this year.

Unfortunately for Canó, he will yet again be looking for a new home following the Braves’ decision to designate him for assignment on Monday.

The team decided to do so after the Braves traded with the Washington Nationals for veteran infielder Ehire Adrianza on Monday, who will ultimately be taking Canó’s infield depth position on the roster.

The #Braves today acquired INF Ehire Adrianza from the Washington Nationals in exchange for OF Trey Harris. The club also designated INF Robinson Canó for assignment.

Canó has been far from impressive thus far this season, totaling a .150 batting average with one home run in 104 plate appearances this year. He is currently in his 17th MLB season, and it seems like his future at the MLB level may be hanging on by a thread after now being designated for assignment for the third time this season.

Many across the MLB world who have been fans of Canó are hoping that he is able to at least stick on another MLB roster for the rest of the season, but aren’t exactly optimistic of that being a real possibility.

The Cano experiment is over. https://t.co/H5DgImbkiw

Poor Robbie is going out like Stan Chera https://t.co/CBFp2sB2XI

Canó cut by the Braves today. I wonder if this is the end of his MLB career. If he wants to continue playing, it may be Winter Ball. I can envision an opportunity as a hitting coach/instructor for him if he decides he wants to get into coaching https://t.co/lAMp3siBwy

Robinson Canó leaving Yankee Stadium in 2013 to start the second half of his career pic.twitter.com/s6KGwCPvPY

The Braves were seemingly a great spot for Canó after star second baseman Ozzie Albies fractured his foot back in June. But Canó just clearly doesn’t seem to have too much left in the tank, if this season is any indication.

He was once a great player, but it might be time for Canó to call it quits after his third landing spot this year didn’t work out.