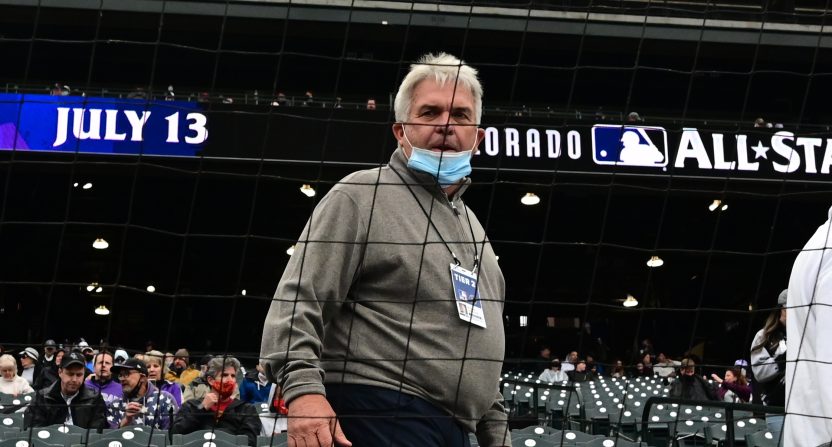 Based on their place in the standings, the Colorado Rockies should have been clear sellers at the MLB trade deadline. But they weren’t. They weren’t even buyers. Colorado’s main trade deadline transaction was extending closer Daniel Bard. On Tuesday, Rockies general manager, Bill Schmidt, made a curious statement about the signing and the team’s lack of activity.

Schmidt was asked why the Rockies were the only team to not make a move at the deadline. He responded with a statement (per Nick Groke, The Athletic) claiming that Colorado was also the only team to sign a player to an extension.

Asked about the Rockies being the only team to not make a deadline trade, Bill Schmidt said:

Well, no, that's not true. But honest mistake.

Indeed, that is not true. The Atlanta Braves signed third baseman Austin Riley to an extension, while the San Diego Padres did the same with starting pitcher Joe Musgrove. It’s also worth noting that both of those moves happened after Bard’s extension.

The MLB world was not kind to Schmidt regarding his mistake.

they didn't even sign the best player to get an extension this deadline period https://t.co/KIlAcemOPz

lmaooooooo. I legitimately have tears in my eyes. The Rockies are priceless. https://t.co/bh1XN4EtLS

I'm floating away like the laughing old guys in Mary Poppins https://t.co/T3maTv3fYw

Rockies are a movie, and one of those movies that are so bad that people become cult fans of it https://t.co/nENsWuQSWW

This is the most entertaining front office in baseball right now, and it's not close. https://t.co/zEbvBAXCXj

Riley is a viable National League MVP candidate while Musgrove is a National League Cy Young Award contender. So, these weren’t exactly scrub players signed to extensions by their respective teams. But we could almost forgive Schmidt’s omission there if it weren’t for one other thing — the extension of Bard isn’t something to brag about.

It’s nothing against Bard at all. He’s been a great reliever for the Rockies this year. But he’s also 37. So he’s a long-term cornerstone for the franchise. And while some players have limited trade value because of their positions, that’s never the case for a relief pitcher. Every contending team in baseball would love to have an extra quality arm out of the bullpen. That was a no-brainer trade that the Rockies didn’t make.