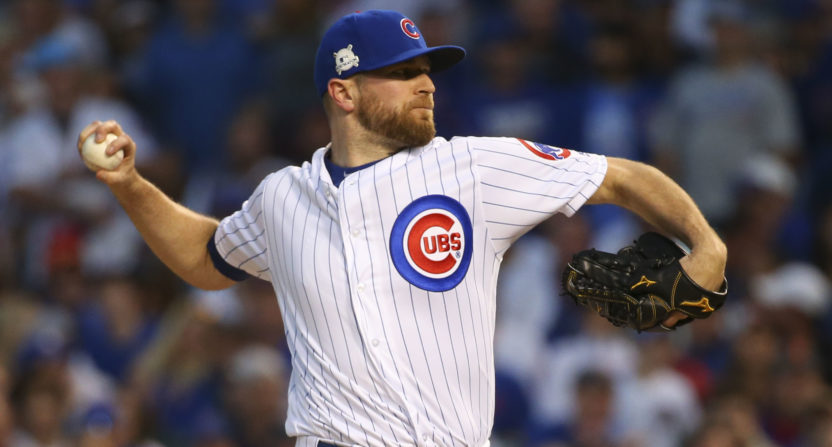 After 25 years in Denver, the Colorado Rockies still haven’t quite found the formula for effective pitching at high altitude. They have tried power pitchers, ground-ball pitchers, veteran pitchers, young pitchers, expensive pitchers, cheap pitchers and just about every other kind of pitcher, to limited success.

This offseason, we’re seeing the Rockies attempt a new strategy: loading up on relief pitchers.

Per Yahoo’s Jeff Passan, the Rockies have signed former Royals and Cubs closer Wade Davis to a three-year $52 million deal, assuring him the highest per-year salary of any reliever in history. Davis’ signing comes weeks after the Rockies inked Bryan Shaw and Jake McGee to matching three-year $27 million deals (McGee has an option for a fourth year) and a year after they gave Mike Dunn a three-year $19 million contract. That means Colorado has now earmarked $125 million to four pitchers who might combine to throw fewer innings than Max Scherzer next year.

At the macro level, this isn’t necessarily a bad strategy. The Rockies know their starters, who form one of baseball’s youngest rotations, will struggle to pitch deep into games at Coors Field, and having a well-stocked bullpen means they don’t have to do so. With Davis, Shaw, McGee, Dunn, Chris Rusin, Adam Ottavino and more, the Rockies should have a solid ‘pen capable of preserving leads in not just the eighth and ninth innings but also the fifth, sixth and seventh.

That said, it’s fair to wonder whether these are the right pitchers to commit to. Dunn is little more than a replacement-level LOOGY. Shaw’s ERA has risen in four straight seasons (although his FIP has actually improved). McGee has a 4.11 ERA and 3.98 FIP in two seasons with the Rockies, numbers that are good but not great when adjusted for context. Given the fickle nature of relievers, all are as likely to post an ERA over 5.00 next year as they are to post one below 2.50.

And then there’s Davis, the big catch. The 32-year-old boasts a 1.45 ERA since becoming a full-time reliever in 2014, and he has made the All-Star Game in three consecutive seasons. But despite solid surface stats with the Cubs in 2017 (2.30 ERA, 79 strikeouts in 58 2/3 innings), his performance slipped noticeably from his Royals days. Davis set a career-high in walk rate and allowed twice as many home runs as he had in the three previous campaigns combined. His 3.38 FIP suggested a competent relief pitcher, not a great one.

The Rockies are betting big that Davis will, from ages 32 through 34, reclaim his status as a top-tier closer, which seems unlikely. Even considering that Colorado might have to offer more to attract big-ticket pitchers in free agency, this deal feels like an overpay.

But maybe overpaying for a closer is a defensible move for a Rockies team that narrowly reached the postseason last year and figures to be on the bubble again in 2018. Colorado’s best players — Nolan Arenado, Charlie Blackmon, D.J. LeMahieu — are squarely in their prime years, and if the Rockies want to capitalize, they have to be aggressive or even reckless. Sometimes that means giving a record-breaking contract to a reliever on the wrong side of 30.