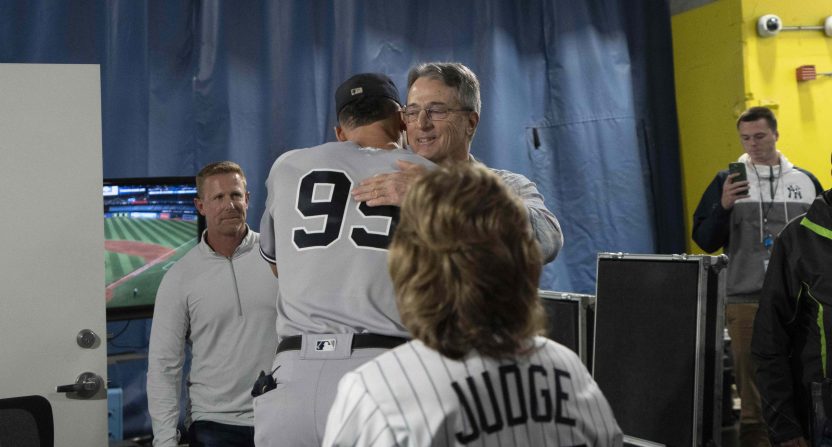 It’s funny how a prominent Major League Baseball player’s chase towards history can end up becoming so annoying, so quickly. That’s definitely the case for Aaron Judge in his quest to pass Roger Maris and break the American League single-season home run record.

ESPN has been cutting into Judge’s at-bats during college football games for two weeks now, annoying millions of sports fans who actively chose to watch football instead of baseball. The Worldwide Leader has also created a hype around Judge’s chase that is normally reserved for when someone breaks the actual record, which the New York Yankees slugger will fall very short of, leading many to presume that the only reason he’s getting this treatment is because of the team he plays for.

It’s also not helping that Judge has entered a mini-slump ever since the cut-ins started.

There’s also the added drama surrounding how the people ahead of Judge and Maris in the single-season home run record books have all been credibly accused of or admitted to taking PEDs. That knowledge has a lot of baseball purists talking about how Judge is attempting to earn the “true” home run record, even though the literal MLB record books still show Barry Bonds as the home run king.

One of those people is Roger Maris Jr., son of the Yankees slugger who held the single-season record for decades before Mark McGwire, Sammy Sosa, and Bonds blew past it. Maris understandably wants his dad to get the credit due for holding that mark for so long and also thinks his dad (and Judge) should be considered the actual home run leaders. And he’s been talking a lot about it for the last few weeks, which is starting to wear on a lot of baseball fans.

Maris Jr. even went as far as to say that there should be two sets of home run records, one for PED users and one without.

Obviously, something like that is never going to happen, but Maris Jr’s thought process garnered some strong reactions around the MLB world.

So… you're advocating for an asterisk? https://t.co/wBM8nHFaTa

this is embarrassing lol https://t.co/9ai7hxhtnH

So … Maris' record is not the real record, then? https://t.co/5JrBozGaDu

You got those positive tests to make sure you are placing the right players in the right categories? https://t.co/sjZpBvVQji