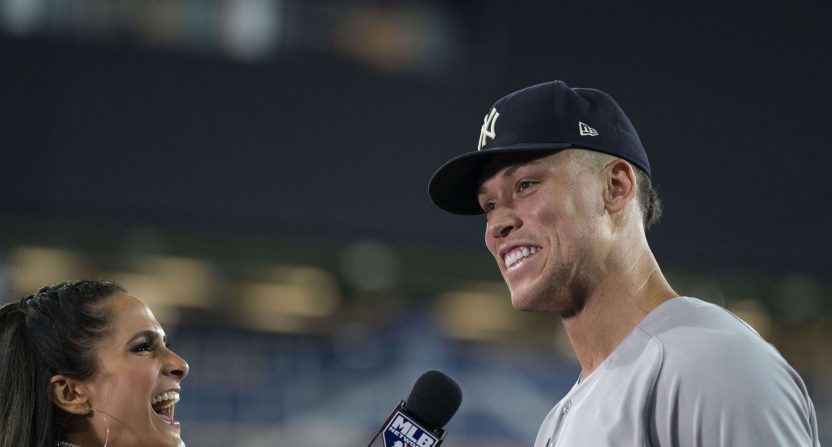 Wednesday night, Aaron Judge hit his 61st home run of the 2022 MLB season, which tied Roger Maris for the all-time New York Yankees mark. While a great accomplishment, it still leaves him well short of the Major League Baseball record for most home runs in a single season.

Don’t tell that to many baseball purists, who see the home run marks set by Barry Bonds, Mark McGwire, and Sammy Sosa as tainted due to their use of PEDs, even though the MLB record books remain firm.

Whoever wrote the headline for Rolling Stone’s story on Judge’s home run certainly falls into that camp. They posted their story of the franchise-tying dinger with the header: “Aaron Judge ties the real home run record.”

Judge is now tied for seventh on the list for most home runs in a single season and is 12 behind Bonds’ 73 home runs that he hit in 2001. And while you might not like to acknowledge the era when many of the sport’s biggest sluggers were juicing, the record book is what it is.

Many sports fans took Rolling Stone to task over their eye-rolling headline and how it represents the mindset of baseball fans who don’t want to accept reality.

Your magazine is literally built on the foundation of people doing their best work on drugs https://t.co/PiZ9Swzx6L

The MLB single-season home-run record is 73, which was set by Barry Bonds in 2001. Aaron Judge currently has 61 home runs. https://t.co/RSahufiU52

this ain't it, chief. https://t.co/VlHvbbQOOJ

More like Trolling Stone, am I right? C'mon, y'all. Deal in facts. https://t.co/beLPW2ha8H

this is dork behavior https://t.co/x0FK8dgQvI

rolling stone should stick to the other kind of records https://t.co/GdfUwq7WtY

It’s worth noting that even Judge respects the actual MLB home run record held by Barry Bonds, saying a few weeks back “That’s the record. I stayed up late watching him do it. That’s the record. No one can take that from him.”