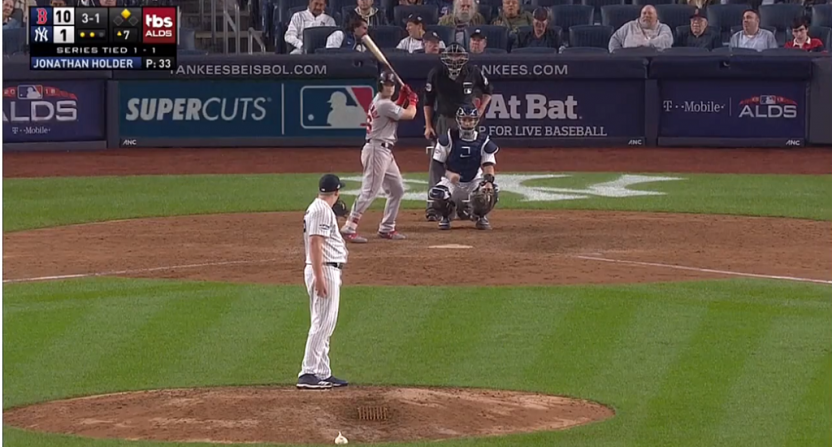 The Boston Red Sox jumped out to a 10-0 lead by the fourth inning of Monday night’s Game 3 of the ALDS against the New York Yankees. The teams entered the game tied 1-1 in a best-of-five series.In the top of the fifth, the score was 10-1, and Boston’s Andrew Benintendi was on first base while slugger J.D. Martinez had a 2-2 count. Benintendi took off and stole second base, to the surprise of TBS announcers Brian Anderson (play-by-play) and Ron Darling (color commentator).

Darling: “Well, I guess from the school of not taking anything for granted. You don’t usually see that. In the postseason, maybe. Regular season, never.”

Fast-forward to the top of the seventh. The score was still 10-1, and Benintendi came to the plate with a runner on second base and a 3-0 count. Benintendi swung at the pitch and fouled it off down the right field line. Darling said that he would find swinging 3-0 in a nine-run game in the seventh inning “offensive, personally.”

“So I was saying before that, on a 10-1 score, Benintendi took off to run. And stole a base. I found that unusual, but you know, you can still keep pushing the envelope.But boy, swinging 3-0 in the seventh with a 10-1 lead. There used to be a book. There’s no book anymore. Everything’s gray. But I would find that offensive, personally.”

Ah, here we go with the ol’ “book” and “unwritten rules” crap again. In a regular season game, okay, maybe swinging 3-0 in a nine-run game in the seventh isn’t a great look. Should it be a thing anyone cares about? No, but you could see how it would bother some players and especially managers stuck in the 1960s. It can come across as “showing them up” and the opposition frequently more or less gives up in a regular season game with such a deficit late. Empty the bench, bring in the mop-up relievers, etc.But this is a playoff game. A very important playoff game. The winner of this game takes a 2-1 lead in a five-game series. The winner of this game goes from having basically a coin flip chance through two games to being huge favorites through three games; they just need to win one of two potential remaining games.So, who the hell — outside of Darling, of course — cares what Benintendi is doing? Everyone on the Red Sox should be trying to win the game and treating it like a huge game, regardless of the score, regardless of the other team’s feelings (not to mention these teams hate each other anyway). Comebacks from nine runs with three innings to play are very rare, but such things do happen in this wacky sport, and they’d probably be more likely to happen when the opposition isn’t straight-up giving up like most teams would in the regular season.Benintendi wasn’t trying to show up the Yankees. He felt that getting into scoring position with two outs in the fifth inning, and taking a big hack at a 3-0 pitch with a runner in scoring position in the seventh inning, increased his team’s chances of winning a huge game. What’s wrong with that?This hasn’t been the best series for Darling. After Game 2, he had to apologize for a remark about Yankees pitcher Masahiro Tanaka.