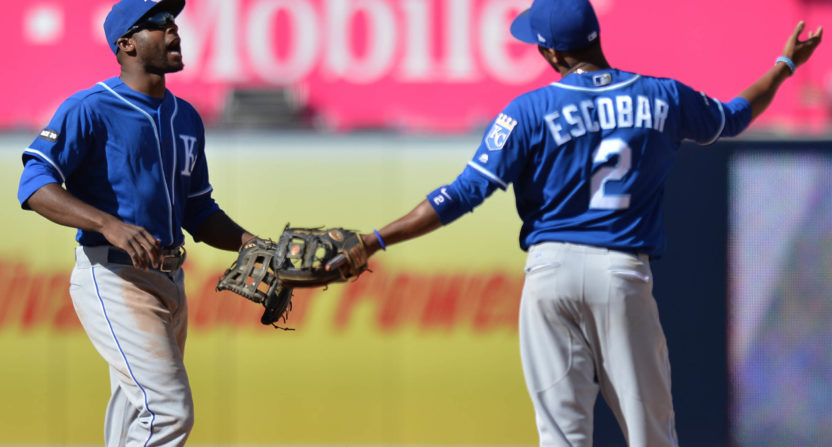 The dismantling of the Kansas City Royals’ 2015 World Series team has felt inevitable for a while, but that doesn’t make it any more painful to watch.

On Thursday, the Milwaukee Brewers reportedly agreed to terms with outfielder Lorenzo Cain, making him the first prominent ex-Royals player to sign with another team this offseason. They made the signing official on Friday.

The #Brewers have officially signed OF Lorenzo Cain to a 5-year contract. pic.twitter.com/AEWziNgyh3

At least one of first baseman Eric Hosmer and third baseman Mike Moustakas is likely to follow, and it’s quite possible that both will depart.

But as they enter what could be a painful rebuild, the Royals could still use some holdovers from the title team to remind fans of what was. It was likely with that in mind that Kansas City has reportedly reached a deal with shortstop Alcides Escobar. Escobar was a starter on the Royals’ championship team and is a fan favorite in the area. He was an All-Star and Gold Glover winner in 2015, is renowned for his durability and viewed as a strong defensive shortstop.

The only problem with this happy reunion: Escobar is not a very good Major League Baseball player.

Alcides Escobar's deal with the Royals is for $2.5 million.

Escobar has not been a capable (or even passable) hitter in years, but he was particularly pitiful last season, ranking last among qualified players in wOBA, second-to-last in on-base percentage and wRC+, third-to-last in OPS and fifth-to-last in slugging percentage. Before a strong September, he was in danger of posting one of the worst offensive seasons in baseball history.

Making matters worse, modern metrics suggest the 31-year-old Escobar is not the defender he once was, either; per FanGraphs, he has posted negative defensive runs saved each of the past four seasons, making him a below-average shortstop. Roll everything together and Baseball-Reference had him as a replacement-level player in 2017, while FanGraphs more generously awarded him 0.5 wins above replacement.

The Royals were bad last season, and they were going to be bad next season pretty much regardless of how they approached this offseason. Maybe they’ll still sign Moustakas, Hosmer, or another free agent in hopes of being slightly less bad. But to see Kansas City lose Cain, a valuable all-around player, and then sign the largely useless Escobar (even for just $2.5 million) less than 24 hours later really symbolizes how dire things are likely to get.