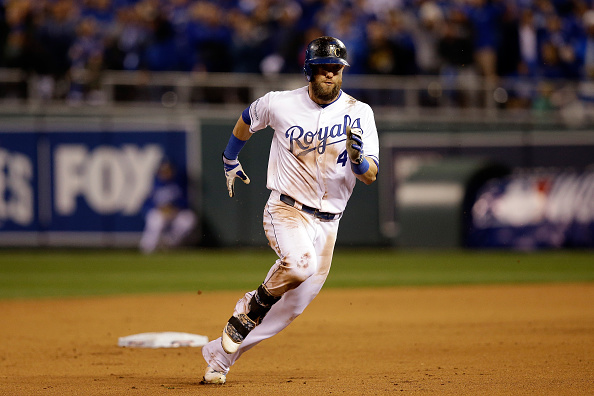 The Kansas City Royals have re-signed free agent outfielder Alex Gordon to a four-year deal, believed to be valued in the low $70 million range reports Jeff Passan of Yahoo Sports. Jeffrey Flanagan of MLB.com initially reported the Royals had a multi-year deal. It was later confirmed to be for $72 million.

Sources: Alex Gordon to Kansas City is done, confirming report from @FlannyMLB. Deal is believed to be in the four-year, low-$70M range.

Source confirms @FlannyMLB's report: The Royals have reached a deal with Alex Gordon, believed to be for four years and $72 million.

Alex Gordon's deal with the Royals is for $72 million over four years.

Following their World Series title this fall, the Royals have been pretty quiet in free agency thus far, only signing reliever Joakim Soria to a three-year, $25 million deal and re-signing Chris Young to a two-year $11.5 million deal. Bringing Gordon back into the fold is a hugely necessary move.

Gordon is a three-time consecutive All-Star who is coming off an injury-filled, slightly disappointing campaign. He appeared in 104 games, hitting 13 home runs, driving in 48 runs, and hitting .271 with a .377 OBP. His speed disappeared, but he still got on base at a great clip, walking at a better rate than ever. Gordon not only had a good bat, but he’s a great defensive left fielder. A converted third baseman, Gordon won four consecutive Gold Gloves from 2011-14, with his winning streak ending in 2015.

Kansas City didn’t have much choice in getting a deal done, as losing Gordon would have given them an even more depleted outfield. They faced losing both Gordon and Alex Rios in free agency, which would have pegged Jarrod Dyson and Paulo Orlando as starting corner outfielders.

At $72 million, the contract is an absolute steal for the Royals as many expected Gordon to approach a nine figure contract this offseason. Gordon is 31, and any deal that would have been longer than four years would be way too long considering it would have gone past his prime. Jason Heyward got $184 million from the Chicago Cubs and Gordon is a comparable player, despite a five-year age difference.

The Royals quietly have done a nice job at keeping a World Series squad together. If they wouldn’t have re-signed Gordon, I’d say they’d be in a bit of trouble, but with this move, it looks like they’ll be right back at the top of the heap in the AL Central in 2016.