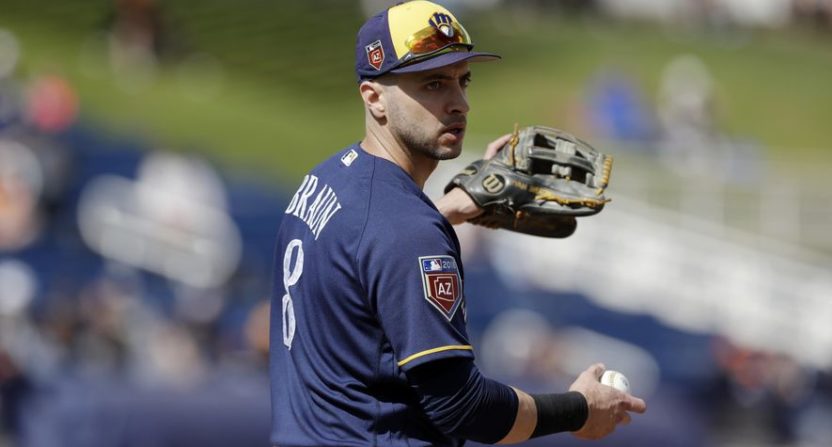 The Ryan Braun experiment at first base has been completed, and it’s apparently a success. Milwaukee Brewers manager Craig Counsell announced on Friday that the slugger, who has played his past 10 seasons in the outfield, will play at first base against left-handed pitching.

With lefty Clayton Richard pitching for the San Diego Padres against Milwaukee in its season opener, that means Braun will get the opening day start for the Brewers at his new position.

The possibility of Braun playing first base was raised in late January during the Brewers On Deck winter fan fest. After Milwaukee acquired Christian Yelich from the Miami Marlins and signed free agent Lorenzo Cain, the roster suddenly had a logjam of talented outfielders with Braun and Domingo Santana already on the team. That led to immediate speculation that the Brewers would have to trade one of those players to free up a spot.

With Braun carrying $61 million on the final three years of his contract (presuming his $15 million option for 2021 isn’t picked up), finding a team willing to take on that money was doubtful. (Especially since he was coming off a subpar season, batting .268 with an .823 OPS, 17 home runs and 28 doubles.) The Brewers also preferred not to trade Santana, who’s only 25 years old and coming off a 30-homer season. While he likely could’ve been a nice trade piece, the argument could certainly be made that Milwaukee is a better team with Santana in its lineup.

The same is true with Braun, who’s crushed left-handed pitching during his career. Facing southpaws, he boasts a .331 career average and 1.014 OPS. It should be noted that Braun wasn’t very good against lefties last season, batting .250 with a .796 OPS. But that’s better than regular first baseman Eric Thames batted versus lefties last year. Thames was an early-season sensation last season, hitting 11 home runs in April and totaling 23 by the All-Star break. But against left-handed pitching, he batted .182 with a .664 OPS.

That made platooning Braun at first base a rather easy decision, provided he could handle playing the position for the first time in his career. (Braun also proposed playing at second base in January, which is something no one likely wanted to see.)

“You’re not going to transform a player to an experienced player and a completely comfortable player in five games worth of action,” Counsell told MLB.com’s Adam McCalvy, “but he’s handled himself very well from our perspective.” Braun played 41 innings at first base during Cactus League play, making eight starts. He’ll make one more start at the position during one of the two games the Brewers will play at Houston before the regular season begins.

Playing Braun at first base against lefties doesn’t solve all of the Brewers’ roster dilemmas, however. What to do with Jesus Aguilar is the next problem Counsell and general manager David Stearns will have to solve. Aguilar batted .265 for Milwaukee last season with an .837 OPS and 16 homers last season. But he only plays first base. Giving him a start against lefties was a possible solution and it probably would’ve been a good one. Versus lefties, Aguilar compiled a .302 and .902 OPS.

The Brewers would prefer to keep Aguilar, who was also the team’s best pinch-hitter last season with a .768 OPS and three home runs. If he goes on waivers, another team will almost certainly claim him. But there are only so many roster spots available and Milwaukee already has at least two right-handed bats on the bench.