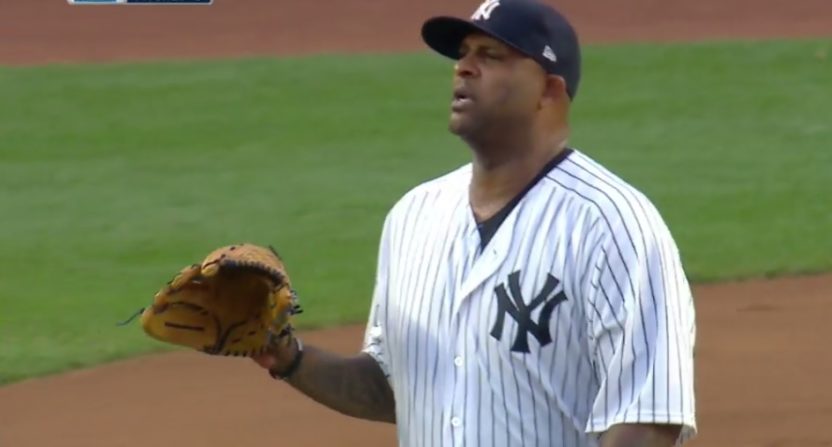 The New York Yankees inched closer to the first-place Boston Red Sox Thursday night with a 6-2 victory in the Bronx. CC Sabathia picked up the win to help pull the Yankees to within 4.5 games of the Sox, but after the game Sabathia still wanted a piece of the bitter rivals.

Sabathia took exception to a first-inning bunt attempt for a hit by Eduardo Nunez. Nunez reached first base thanks to a throwing error by Sabathia, and the veteran pitcher knew exactly why Nunez attempted to bunt in that spot. Sabathia’s playing on a weak knee, but it was Sabathia who called the bunt attempt weak.

“Just kind of weak to me. It is what it is. It shows what they got over there,” Sabathia said of the bunt attempt, seemingly designed to specifically take advantage of an aging pitcher on a bum knee. “It just gets you fired up. It makes you want to beat them. Obviously, I want to win every time I go out there, but even more so after that.”

We are now entering the fuzzy area of baseball that pulls rules out of nowhere. Yes, we’re talking about the unwritten rules of baseball.

“Swing the bat,” Sabathia said. He got more heated when discussing it as well.

“I don’t give a f–k about their reaction,’’ Sabathia said, referring to his reaction to the Red Sox dugout. “I don’t care what they have to say. I’m out there early every day. If they’ve got something to say, we can meet in center field.”

By Sabathia’s logic, a batter should respect the fact that the pitcher is not playing in peak physical condition and therefore not do whatever it takes to reach base safely. That’s hogwash. Nunez did absolutely nothing wrong, and there is no reason why Nunez should feel any need to apologize for trying to do what he needs to do to give the Red Sox the best chance to win in a division race in September.

Would Sabathia purposely pitch in a way that would pay respect to any batter’s potential knee problems? No, of course not. In professional sports, you take advantage of your opponent’s weaknesses at every opportunity.

After the game, Nunez stood by his decision to bunt in that situation, and he said he would do it again if it felt like the best thing to do.

Nor should you, Nunez. Sabathia is just being a crab apple that you exposed a weakness in his game.