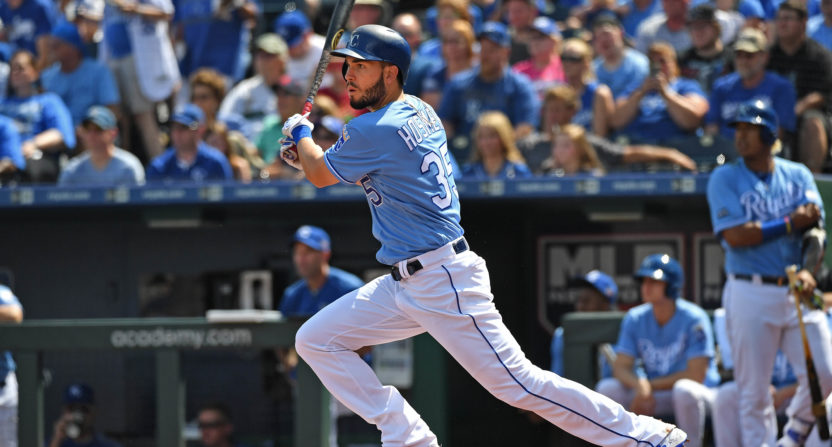 The most confusing free-agent rumor in the majors this offseason has been the San Diego Padres’ interest in signing longtime Kansas City Royals first baseman Eric Hosmer to a lengthy, high-dollar contract.

Welp, that’s apparently actually happening! The San Diego Union-Tribune’s Kevin Acee was the first to report that the two sides have agreed to a deal.

The #Padres got their man. Eric Hosmer is their new first baseman. https://t.co/ox6tAoeDVe

And MLB Network’s Jon Morosi reports that it’s an eight-year (!!!!) deal, with an opt-out after five years.

Eric Hosmer has agreed to an 8-year contract with the #Padres that includes an opt-out after 5 years, source says. @MLB @MLBNetwork

Okay, so the reason everyone has been so confused about this rumored signing is because it makes little to no sense on the surface.

San Diego will quite likely remain below average in 2019, and probably still a non-contender in 2020. While they have some intriguing young talent and a very good farm system, they don’t appear all that close to playoff contention. And keep in mind they play in the same division as the juggernaut Dodgers, the 2017-emerging Diamondbacks and Rockies, and a Giants team that appears to be a contender again (though the aging Giants could certainly fade soon).

The Padres should now be looking to add proven talent to be part of their next contending team, but young talent. Hosmer is 28 years old. By the time the Padres are ready to win, Hosmer will be in his 30s and likely on the decline. This is with an incredibly rare, special free agent class just one offseason away featuring superstars such as Bryce Harper and Manny Machado (both players will be 26). Those are the kind of franchise-changing stars rebuilding teams like the Padres, Phillies, and White Sox should be looking to go all-in on.

And here’s the thing: we don’t even know if Hosmer is all that good!

Hosmer is also an extreme groundball hitter; his 55.7 groundball percentage over the last two seasons is the second-highest among qualified MLB hitters. This isn’t a trait you want out of a guy you’re  looking for slugging from (and from a guy with no speed), and it’s concerning when projecting his long term run production.

Additionally, Hosmer plays a position where everyone mashes. You can find quality run production from the first base position cheaply.

Even new San Diego front office member Dave Cameron warned of this in December! Clearly he didn’t get much say in this signing.

Matt Adams got 1/$4M to be a backup. Eric Hosmer is probably getting $100M+. So I’ll just share these career numbers and walk away. https://t.co/Na60BaIsKU

So, the Padres handing out a big contract over the next couple of seasons to accelerate their rebuild is something that made sense, but it’s just really hard to justify this being the move for that. And it arguably doesn’t even accelerate the rebuild; there would seem to be just as good of a chance Hosmer continues his ups and downs and the contract backfires (especially in his later years, and it’s hard to imagine him wanting to opt out after year five, when he’s likely on the decline).

Maybe the Padres thought they would have little chance convincing the Harpers and Machados in the upcoming offseasons, and maybe they didn’t want to enter the $200+ million territory on contracts (and with Harper and Machado, $300+ million).

Still, this move just feels overly aggressive by general manager A.J. Preller, and for the wrong player. The Padres had wisely been patient over the last two years with their rebuild, so now choosing to go with a huge contract for a guy that will be in his 30s by the time they’re ready to contend, and at a position you can easily find big offensive production, is just really bizarre.