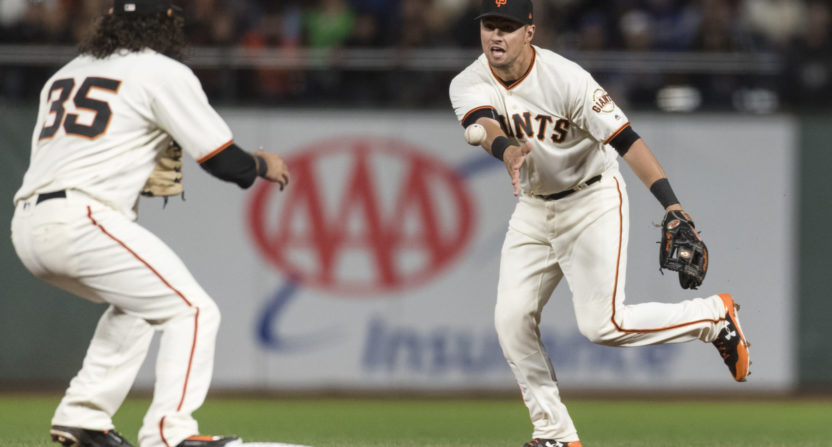 After trading for third baseman Evan Longoria last week (in exchange for a package headlined by promising prospect Christian Arroyo), the Giants are going for it. They’re chasing a shot at a short-term wild-card berth instead of building toward a long-term, sustainable winner. That effort will require substantial financial investment and maybe some more prospect sacrifice, and it may not yield even passable results. Whether or not it works, an ugly future looms in the near distance. With that in mind, the Giants’ all-in approach seems puzzling… until you realize it might be their only choice.

The Giants were built to be competitive in 2017. Their pitching staff, led by Madison Bumgarner, Johnny Cueto and Jeff Samardzija, projected to be one of the league’s best, and their offense, with Buster Posey, Brandon Crawford and Brandon Belt, looked acceptable, if not exactly fearsome. But although their tumble to 15th in baseball in ERA and 30th in OPS owed partially to freak injuries, such as Bumgarner’s ATV accident, the problems went much deeper than that. Up and down the roster, performance fell off sharply, and with many of the biggest culprits (Cueto, Crawford, Mark Melancon, Hunter Pence) on the wrong side of age 30, there’s no guarantee they bounce back. With better health, the Giants should bounce back a bit in 2018. But without a time machine, it’s tough to see one of baseball’s oldest teams improving by 25 wins based on regression alone.

From a team-building perspective, San Francisco finds itself somewhat stuck. With Posey under contract through 2022, it might seem sensible for the Giants to embark on a mini-rebuild with hopes of building a playoff team in 2019 (before Bumgarner hits free agency) or 2020. That strategy would entail trading veterans for young players who are a year or two away from competing, while holding onto any prospect who could contribute soon. Problem is, the Giants have few players outside of their two untouchable stars who would fetch much interest on the trade market. Samardzija, Cueto, Crawford, Melancon and Brandon Belt are all useful players, but their contracts (all roughly at or above market value) would likely limit the Giants’ return. Joe Panik remains under team control, but he hasn’t quite fulfilled the promise he flashed in 2015.

So without the type of marketable trade chips that could facilitate a quick rebuild, the Giants were basically left with two options entering this offseason:

1.) Tear everything down. That would have meant trading Bumgarner and Posey, getting what they could for the pricey fading stars and setting an ETA of, say, 2022 for their next playoff team.

2.) Go for broke. Fill holes by breaking the bank in free agency and dumping a (meager) farm system on the trade market. Then pray that many of the players who had poor years in 2017 bounce back in 2018.

The Giants have clearly chosen Option 2, chasing Giancarlo Stanton, acquiring Longoria and now reportedly pursuing Lorenzo Cain, Jay Bruce and others. There will be a reckoning, in which San Francisco fields a Triple-A roster and loses 90 games for years straight, but it probably won’t come in 2018.

Of course, just because the Giants will chase a playoff berth doesn’t mean they’ll get one — or even come close. Longoria plugs one hole, but this team still lacks a single starting-caliber outfield and could use help at the back of its rotation and in its bullpen. Currently, FanGraphs projects this team for 81 wins, third in the NL West and tied for sixth in a top-heavy NL. Not exactly inspiring.

There’s plenty of time left this offseason for the Giants to upgrade their roster, but their payroll is already running high, and the remaining free-agent options aren’t great. J.D. Martinez would be a poor fit in the spacious AT&T outfield. Eric Hosmer would force Belt out of position. Cain possesses a skillset that doesn’t figure to age well. If general manager Brian Sabean can find cash for two outfielders and a pitcher to fill out the rotation, this team could enter the spring as a wild-card favorite, but 90 wins and a comfortable playoff berth (let alone a division title) seems unlikely under even the best-case scenario.

Throwing all their resources into pursuing a wild-card berth might not be efficient or particularly satisfying, but it’s all the Giants are left with. This team chose its fate when it extended Crawford and Belt, then signed Samardzija, Cueto and Melancon, all in hopes of extending a championship era that was slipping away. With a roster built to win now, it’s too late to turn back.