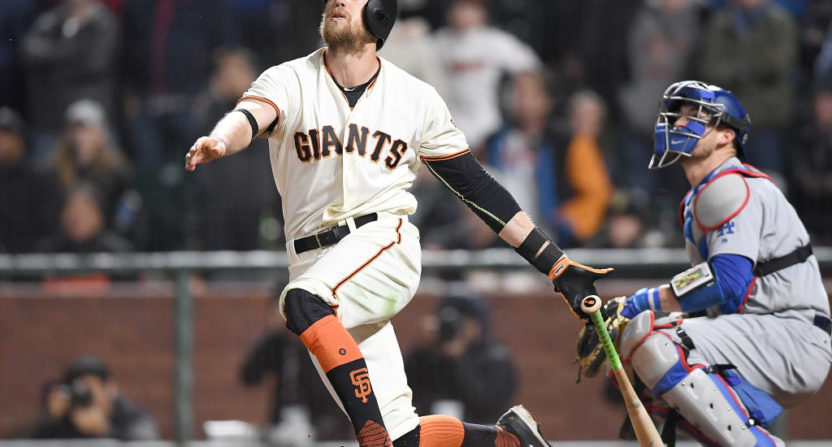 Quick — which team has the worst record in baseball this year? It’s the Philadelphia Phillies (which you probably knew), but the second-worst team in baseball may come as a surprise. The San Francisco Giants — World Champions in 2010, 2012, and 2014 — are sitting at 30-51, 22.5 games back of the arch-rival Los Angeles Dodgers in the NL West and a stunning 17 games back of the typically hapless Colorado Rockies for the NL’s second Wild Card.

The Giants also have the second-worst run differential in baseball at -97, better than only the offense-starved Padres and their -114 mark.

This isn’t just a couple of bad months for the Giants, either. In 2016, after topping out at 57-33 on July 10th, the team scuffled to the finish line, ending the year on a shocking 30-42 stretch, limping into the postseason where they lost to the Chicago Cubs in four games in the NLDS.

And after an offseason that saw the team give $62 million to closer Mark Melancon and increase their payroll to a club-record $180 million, it looks like the Giants are ready to blow most of their team up and move on to the next chapter.

According to a report from MLB.com’s Jon Morosi, the Giants have just three untouchable players, and are open to moving everyone else on their roster.

Keeping those three players would make sense for the Giants. Posey is the face of the franchise and signed through 2021 (with an option possibly keeping him through 2022). Bumgarner’s value has taken a bit of a hit following a disappointing dirtbike accident in Colorado, but he’s affordably under control for two more seasons thanks to a pair of club options. Crawford is also inked through 2021, and his value grew over the last two years as his offensive value caught up with his defensive value (though that offense has taken a hit this season, with Crawford hitting a sad .238/.281/.379).

And while that seemingly opens the door for other players to be dealt, how many of them really have that much value? Brandon Belt is the most interesting name on offense, signed through 2021 for $17 million per season starting next year, but his offense has slipped to a .228/.341/.442 slash line this year. Hunter Pence is still owed $18.5 million in 2018, and his .260/.304/.365 triple slash isn’t going to light the world on fire, especially from a corner outfield spot.

At 26, Joe Panik could have a fair amount of value, but teams would still be looking at a guy who spent time injured in both 2015 and 2016 whose offense has been all over the board during his time in the majors. Eduardo Nunez is going to be a free agent this offseason and wouldn’t bring back all that much value. Denard Span is still owed more than $15 million, but has stolen just 15 bases in his year and a half as a Giant after swiping at least 15 in six of his first eight seasons in the majors.

On the mound, Johnny Cueto could have value, but teams acquiring him would either have to deal with the fact that he’s either a two-month rental due to an opt-out following the 2017 season, or they’ll be on the hook for over $90 million through the final four seasons of his contract. Jeff Samardzija also has value with a 9:1 strikeout to walk ratio, but he has a partial no-trade clause, is owed $54 million over the next three seasons, and has been notoriously erratic during his MLB career. 2016 trade deadline acquisition Matt Moore can be controlled for two more seasons thanks to club options, but his ERA this year is over 6.00.

Ironically, the guy who may be most likely to get dealt is Melancon, who the team signed nearly seven months ago and was traded by the Pirates to the Nationals at last year’s trade deadline. A closer is really the one thing that Washington lacks right now, and it would be interesting to see if the team would be willing to pay the final three years of Melancon’s contract *and* give up a prospect for him for the second straight summer.

However, the Giants don’t appear to be willing to tear it all down. According to CEO Larry Baer, the Giants are attempting to reload rather than rebuild, which seems… a bit foolish.

“This is not going to be a thing where we go underground for three years to five years,” team president and CEO Larry Baer told NBC Sports Bay Area. “It’s just not who we are.”

Despite this week’s sweep of the Rockies, the Giants can’t just stand pat and pretend everything is fine. Before sweeping Colorado, the team was on an ugly 7-25 run. They haven’t been a .500 team all year, and have been at least 10 games out of first place for the last month. But with a lack of truly valuable, movable assets, San Francisco will be hard-pressed to dramatically rebuild their club at one trade deadline like the New York Yankees did last season.