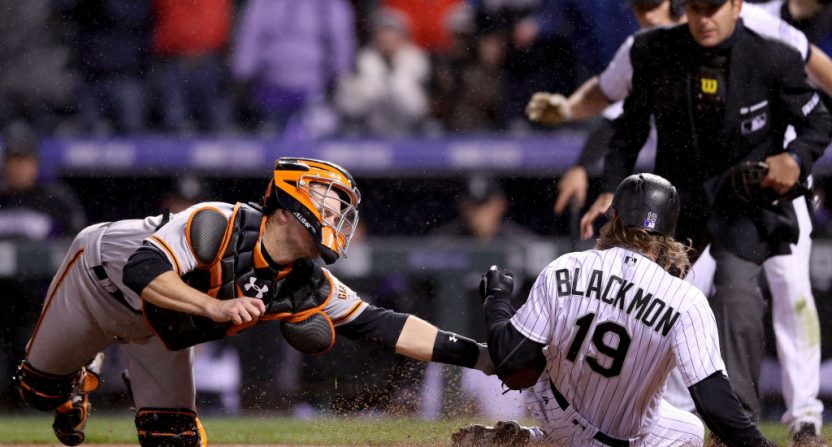 Things had already been going rough for the San Francisco Giants early on in the 2017 MLB season.

And then Friday came along.

The Giants placed ace Madison Bumgarner on the disabled list after he suffered a left shoulder sprain (his throwing arm) and bruised ribs… in a dirt bike accident. The injury is expected to keep Bumgarner out 6-8 weeks, and is a potentially devastating blow to the Giants’ playoff chances as FanGraphs’ Nicolas Stellini explains:

To put it bluntly, the Giants are in a whole world of trouble. They’ve still got Johnny Cueto, but Bumgarner is an incredible talent and replacing him with whichever depth option is called upon is extremely sub-optimal for a team that has real aspirations at a playoff spot. Bumgarner is supposedly going to be out for six to eight weeks, which translates to about mid-to-late-June. That’s two months without one of the ten best pitchers in the game.

It has since been reported that Bumgarner may be out even longer than two months:

As mentioned last night: The Giants are concerned that Madison Bumgarner will miss more than a couple of months.

While that’s particularly brutal news for the Giants, things didn’t exactly get better as Friday went on. The team had a game on Friday night in Denver, and their bus backed into a car on the way to Coors Field.

Our team bus backed into a car on way to Coors. Stay hot Giants

Thankfully there were no injuries in this accident, and the team was able to arrive on time for the game. And they had to like their chances with Johnny Cueto on the mound, especially when they took a 3-0 lead into the fourth inning.

But that fourth inning was, well, yikes. With one out and the bases loaded, the Rockies’ Trevor Story deposited a Cueto fastball over the right field wall for a grand slam to give Colorado a 4-3 lead:

Three batters later, Colorado’s Charlie Blackmon hit a line drive to Hunter Pence that looked like it was going to end the inning, but Pence slipped, and the ball rolled all the way to the right field wall. It turned into an inside-the-park two-run homer for Blackmon:

Yep, a grand slam, and an inside-the-park homer, in the same inning. The Rockies are the first National League team since 1950 to pull that off:

Rockies are the first team since Boston in 2011 to hit a grand slam and inside-the-park homer in the same inning. First NL team since 1950.

And the (wacky) six runs in that inning would serve as the difference, as the Rockies won the game 6-5. The loss puts the last-place Giants (6-11) five games behind the Rockies for first place in the NL West.

Things can always get worse, but it will be difficult, this season, for the Giants to have a day as bad as Friday was.

1 thought on “The San Francisco Giants had a terrible, horrible, no good, very bad day”