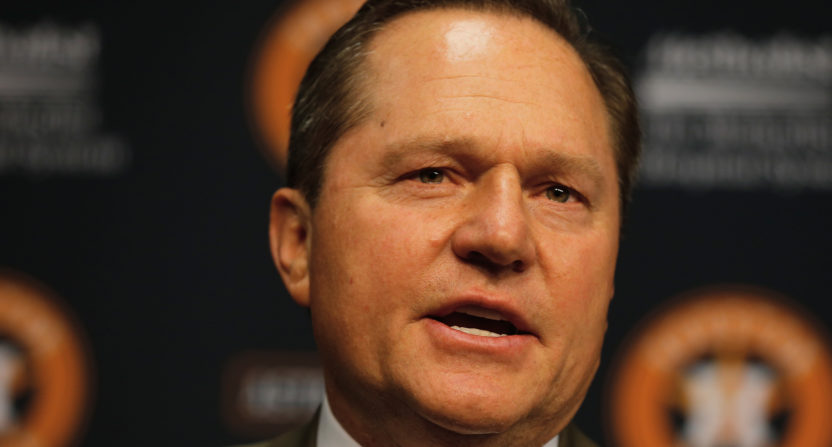 MLB general managers are meeting this week in Phoenix to discuss… you know, general manager things, and with a lot of reporters on hand but not much actual news to report, there exists a distinct void in the coverage continuum.

Boras, the most powerful agent in baseball, is annually a huge hit with reporters this time of year because: 1.) He’s more than happy to serve up glowing quotes about his clients that then stir frenzied fans clamoring for their team to sign them. 2) He speaks in sound bytes that are ridiculous enough to make for perfect viral tweets. But although fighting to players to earn the salaries they deserve is a worthy goal, his act (and reporters’ happiness to cover it breathlessly) warrants some eye rolls.

Last week, Boras pledged to get J.D. Martinez a contract worth $200 million, pointing out that the outfielder’s performance in the second half of 2017 put him on a 70-homer pace. Already this week, the mega-agent has constructed an elaborate analogy of “Playoffville” (Eric Hosmer is the “Federal Express” for that city, if you must know), claimed that teams who say they’re not making money are practicing “Casper Finance” and proclaimed that Jake Arrieta “is a big squirrel with a lot of nuts in his tree.”

Scott Boras just said “Jake Arrieta is a big squirrel with a lot of nuts in his tree.” So here we are.

On one hand, teams deserve to be shamed for crying broke when they’re doing just fine, and hearing Arrieta compared to a squirrel is pretty funny. On the other hand, there’s a lot of nonsense in there. Martinez’s big numbers in three months in the thin air of Arizona obviously don’t make him Barry Bonds. And if Hosmer were truly the “Federal Express for Playoffville,” his Royals teams would have appeared in more than two postseasons and he would have better than a .732 playoff OPS.

To see the hoards of reporters who gather around Boras, you might think he was the most insightful baseball thinker around. In fact, he is mostly a blustery spin-master. Many of the arguments he makes can be quickly picked apart, and many of the stats he offers are actively disingenous. And yet…

Scott Boras is somewhere in this sea of humanity. pic.twitter.com/pWb2cBmG5c

Everyone wants to hear what Boras has to say, even as his words waver between being meaningless and misleading.

Of course, while we may sometimes scoff at Boras’ BS, it is ultimately his job to advocate for his clients, even if they are not actually productive in the playoffs or worthy of the nine-figure contracts he wants for them. In the end, it’s not his propaganda that deserves our eye rolls. It’s our willingness to believe it.