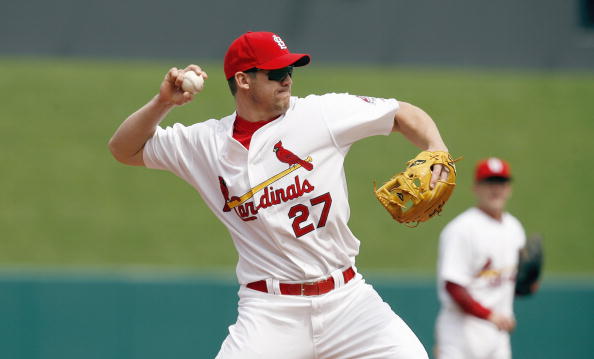 Among all the factors that influence voting for the Baseball Hall of Fame, one criterion drives results more than any other. It is not batting average, ERA, home runs or WAR. It is a qualitative metric we might call “Feels like a Hall of Famer.”

Some voters admit that “Feels like a Hall of Famer” informs their vote, arguing that baseball’s greatest honor should be bestowed to the players who pass an instinctive sniff test. But even voters who claim to rely on data more than gut often let “Feels like a Hall of Famer” affect their ballot by manipulating stats to match their preexisting opinions. This helps explain why Jim Rice was voted in and why Jack Morris nearly was, why Bert Blyleven struggled to earn induction, why Jim Edmonds and Kenny Lofton fell off the ballot immediately and why Steve Garvey’s candidacy endures.

It’s the “Feels like a Hall of Famer” test that will unjustly keep former Phillies, Cardinals, Blue Jays and Reds third baseman Scott Rolen out of Cooperstown for the near future and maybe off the Hall ballot after a single year. Though results have barely begun to trickle in, Ryan Thibodaux’s Hall of Fame tracker reports that Rolen has been named on only four of 19 ballots so far, and it’s conceivable he could fall short of the 5 percent threshold that would keep him around next year.

Rolen was not the type of player broadcasters gush about as a “future Hall of Famer.” He didn’t collect 3,000 hits or 500 home runs. He never won an MVP award. His playoff numbers are poor, and he failed to produce an indelible signature moment for baseball fans everywhere to remember him by. But upon looking broadly at his career, and considering the Hall’s existing standards, it’s hard to see him as anything but Cooperstown-worthy.

Rolen played 17 Major League seasons and was an above-average hitter (per wRC+) in 12 of them. He reached seven All-Star Games and won eight Gold Gloves. His career slash line of .281/.364/.490 places him among the best offensive third basemen ever, even after adjusting for era and home ballpark, and his defense was top-notch by any metric. In the shadow of Albert Pujols, Bobby Abreu and Joey Votto, Rolen was a five-tool player who posted a WAR of 4.0 or better in nine seasons. He was essentially Ron Santo, with a little less plate discipline and a little more glove. Or Barry Larkin with a lower average but better pop.

When I sat down last month to compose an imaginary Hall of Fame ballot, I knew Rolen graded out well by advanced stats, but I didn’t realize just how well. As it turns out, he ranks in the top 100 all-time in Baseball-Reference WAR, just behind Larkin. FanGraphs has him even higher, thanks to defense it rates as fifth-best ever at third base. Jay Jaffe’s JAWS system places him as the 10th best third baseman ever, above the Hall average in both career and peak value. Adam Dorowksi’s Hall of Stats declares him 42 percent better than the Hall baseline.

According to the most sophisticated metrics and the smartest analysts, Rolen is a clear-cut, no-doubt Hall of Famer.

But even armed with that knowledge, I was hesitant to throw my (highly trivial) support behind Rolen. I never thought of him as a Hall of Famer during his career, and I couldn’t wrap my mind around him being one of the 10 best players on a stacked Hall ballot. Because he didn’t have Manny Ramirez’s power, Vladimir Guerrero’s contact skills, Andruw Jones’ historic defense or any other single trait that made him feel like an all-time great, I left him off my hypothetical ballot. Like many others, I had looked at Rolen’s numbers, noted how impressive they were, then sought out reasons to exclude him.

But as I mulled the ballot some more, I began to realize I had been wrong, just as actual voters who employ similar reasoning over the next month of voting will be wrong. That I hadn’t recognized Rolen’s qualifications earlier was my fault, not his. Upon any honest analysis, he rates as one of the most valuable players ever at his position, and the fact he accrued that value with a skillset I wasn’t sharp enough to appreciate shouldn’t diminish his candidacy one iota.

Others disagree. In a thoughtful column published last week, WEEI’s John Tomase explained why he voted for Gary Sheffield and not Rolen. Basically, Tomase reasoned that though Rolen may have been “really good at everything,” Sheffield was “great at something” (hitting).

I don’t mean to pick on Tomase, whose ballot is more than defensible and who clearly put ample time and thought into his picks. But his argument strikes me as a classic example of the unspoken “Feels like a Hall of Famer” criteria popping into even a statistically driven case. Tomase argues, in essence, that players whose excellence is obvious deserve induction more than those whose excellence is subtle.

Tomase’s argument might hold water if you believe in a literal Hall of Fame in which the most famous players earn induction. But if you believe the Hall exists to honor the best players, its voters should accept their greatness in all forms. The value Rolen produced on defense helped his teams win games as much as the value Sheffield produced at the plate (and gave back in the field). Privileging one type of value over another feels patently unfair.

The Hall of Fame doesn’t have to be all about numbers. Intangible factors can and should push some candidates over the edge and hold others back. But there’s no justice in punishing Rolen for the baseball world’s collective inability to appreciate him. The fact that Rolen didn’t feel like a Hall of Famer had nothing to do with his play, which was consistently stellar. Instead, it had everything to do with our time-honored deficiency in recognizing all-around players, especially at third base.

Now, Hall of Fame voters have a chance to correct that mistake. They can check the box next to Rolen’s name and vow not to keep out future candidates whose talent went under-appreciated during their careers. The baseball world underrated Scott Rolen for 17 years. There’s no reason for Hall voters to double down now.

The caddie, who was not named by the PGA Tour, was taken to the hospital after collapsing on the course.

The caddie, who was not named by the PGA Tour, was taken to the hospital after collapsing on the course.