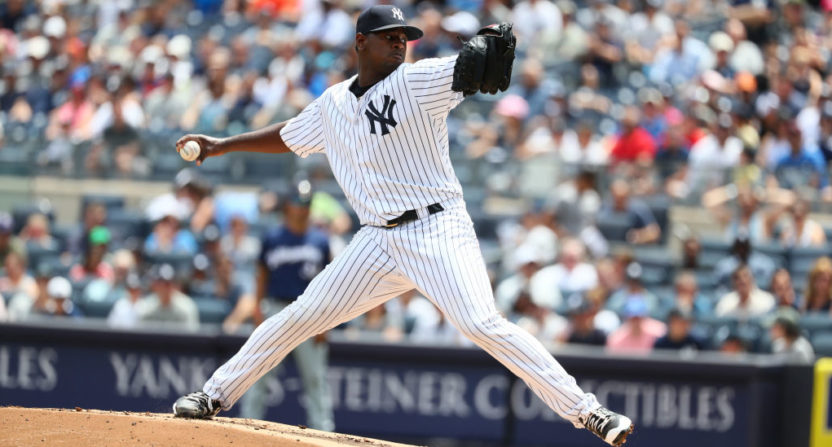 The Yankees’ ace took the mound Wednesday for his 20th start of the year. He spent very little time in between pitches. He gathered himself quickly, assuredly. To lead off the game, he struck out Reds outfielder Billy Hamilton on three offerings. Two of them 96+ mph fastballs, the middle pitch a changeup. He wound up throwing seven three-hit innings, allowing only two unearned runs and striking out nine.

As outlandish as the following statistic may read, believe it in its entirety: Luis Severino is tied for second in the Major Leagues with the most starts of 7+ innings and one or fewer runs this season. The only pitcher that tops him? Clayton Kershaw. The pitcher that ties him? Max Scherzer.

The 23-year-old’s relentless consistently begs the question… if the Yankees end up in the AL Wild Card game, is Severino the guy they’ll turn to?

According to Yankees skipper Joe Girardi, it’s safe to go down that road.

Is @LuisSeverino94 the #Yankees' ace, Joe?

"He's thrown the best all year for us. Call him what you want."

So why isn’t he getting more attention? Why isn’t Girardi vehemently claiming Severino as, without a doubt, the Yankees’ ace? Why isn’t a guy in the same category as Kershaw and Scherzer amassing national acknowledgment?

Most Starts of 7+ IP and 1 ER or fewer This Season:

Well, what’s the definition of an ace? Loosely, he’s a guy that goes deep into games, minimizes bullpen usage and lets up as few runs as possible. Severino does all three. However, what’s one facet that many aces possess and Severino lacks? Wins.

His 7-4 record looks decent, but his nine no-decisions loom larger than the wins. Severino has allowed three or less earned runs in seven of those nine no-decisions, five of the ND’s being quality starts.

It should come as no surprise that when New York’s bats are hot, they’re an asset for whoever’s on the hill. But in Severino’s case, he gets the least amount of run support per nine innings (RS/9) of any regular Yankee starter in 2017. CC Sabathia gets 5.97 RS/9, Tanaka gets 5.29 and Montgomery gets 4.83. Severino, on average, gets 4.77 RS/9.

Yankee fans may hesitate to refer to Severino as an ace when he’s placed in a rotation that includes Sabathia and Tanaka, who carry much more impressive pedigrees than the new kid on the block.

Severino has come a long way from his Major League debut when he entered the scene on August 5, 2015 as a 21-year-old rookie facing the Red Sox at Yankee Stadium. In 11 starts, he dealt 56 strikeouts on a 2.89 ERA with a 5-3 record in the fourth quarter of the Yankees’ 2015 season.

Last year, Severino was twice demoted to the bullpen with a short trip to Triple-A, searching for a rhythm to his impending success. He capped 2016 on a 5.83 ERA with a 3-8 record in 11 outings, the same number of starts he tossed the year before.

Thus, Severino may need to prove himself for longer than just one solid season to earn the title and respect of an ace. But he’s, without a doubt, the Yankees’ unsung hero amid in a class of impressive youths during their run for a title.