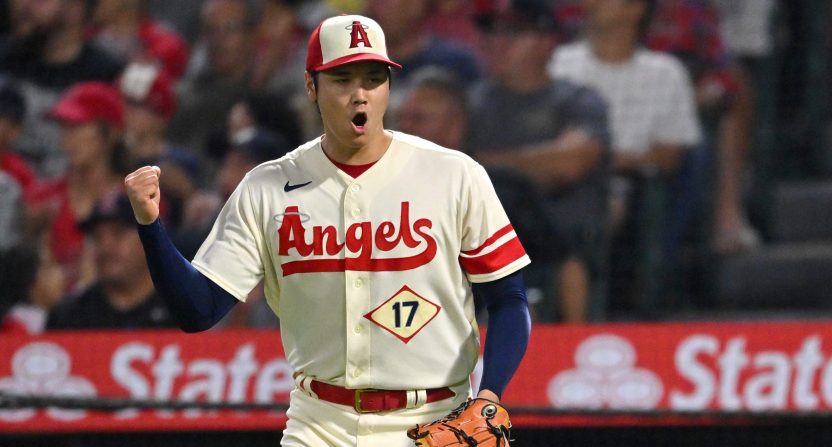 Shohei Ohtani has not allowed a hit through 7 innings. ⚾️👀🔥 pic.twitter.com/xD6spBmgPn

Ohtani had a no-hitter still going with two outs in the top of the eighth inning, but Oakland’s Conner Capel broke it up with a single through the left side of the infield. This batted ball had just a .370 expected batting average:

Shohei Ohtani loses the no-hitter with 2 outs in the 8th. ⚾️☹️ pic.twitter.com/n6ivWHr7lz

Oakland’s Dermis Garcia singled as well in the next at-bat, on a batted ball that had an expected average of .300.

So, some tough luck there at the end for Ohtani, but that’s one of the many reasons why it’s so hard to throw a no-hitter. Along with excellent pitching, it usually features a few fortunate breaks and great defense.

And in addition to starring as a pitcher, Ohtani made an impact with his bat in the game as well. He went 2-for-4 and extended his hitting streak to 14 games with an RBI single in the bottom of the first inning.

Here’s a look at how the baseball world is reacting to Ohtani’s brilliance and no-hit bid on Wednesday night:

Shohei Ohtani has 34 HR, 94 RBI and 11 stolen bases this season. He also does stuff like this. pic.twitter.com/AOARhsk2xn

No pitcher has ever had more than 26 career home runs under his belt at the time of throwing a no-hitter (Warren Spahn, 26 at time of each of his no-nos) [h/t @EliasSports]

File this away for someday. Based on tonight, someday soon.

Appreciate this while we can. This is special and truly a joy to watch. I can’t believe what I’m seeing with my own eyes.

Shohei Ohtani walks off to raucous ovation after completing his eighth scoreless inning of the night dropping his ERA to 2.35, his ERA has been sub-three since June 22 (16 starts) — oh, and he has an .887 OPS in case you forgot

The only players all-time to post those numbers (or better) in a season:

I don’t normally have takes on here, but here’s one: The Angels can’t trade Shohei Ohtani. They need to ride it out with him in 2023 and hope they do enough to convince him to stay long term.

You just can’t give up on that.

Me watching Shohei Ohtani do anything on a baseball field pic.twitter.com/1foi3Slq3u