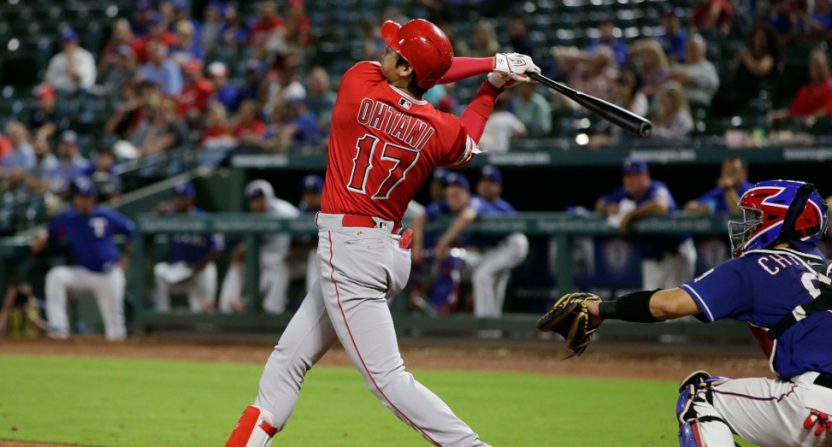 When news came out Wednesday afternoon that Los Angeles Angels’ star Shohei Ohtani had suffered further ulnar collateral ligament damage and that the team was recommending UCL replacement surgery (famously named for Tommy John), there was some question about if Ohtani would want to undergo that surgery before the end of the season given his success as a designated hitter (where the UCL is less important), or even if he might decline it altogether and focus on his role as a  hitter. Well, Ohtani certainly proved his value at the plate Wednesday night, going four-for-four (with a walk as well) with two home runs. Here are his home runs:

Those are certainly impressive, and Ohtani has demonstrated significant skill as a batter all season long. Those home runs were his 17th and 18th of the season, and he’s hitting .287 with a .946 OPS. As per general manager Billy Eppler’s comments afterwards (as relayed by MLB.com’s Maria Guardado), Ohtani may be able to continue to hit this season, and maybe even next year if he does undergo offseason surgery (although it would likely be 2020 before he could return to pitching):

“For now, he’s cleared to hit,” Eppler said during a conference call with reporters. “I think we saw effectiveness even last night [when he homered] with the ligament being in the situation it’s currently in. He is cleared to hit still.”

…Despite the setback with his elbow, Eppler said the Angels still view Ohtani as a two-way player.

“He trusted that we’d use him in a two-way role, and we made that commitment,” Eppler said.

…Eppler said it’s too early to put a timeframe on any sort of return for Ohtani. He added that the Angels would consult their medical staff before entertaining the idea of using Ohtani at a defensive position if he’s unable to pitch next year.

“Right now, the player is processing the result of the image. Everybody has to respect that time that somebody needs when they’re digesting information regarding themselves.”

We’ll see what’s next for Ohtani, but he definitely had quite the remarkable response to this setback.