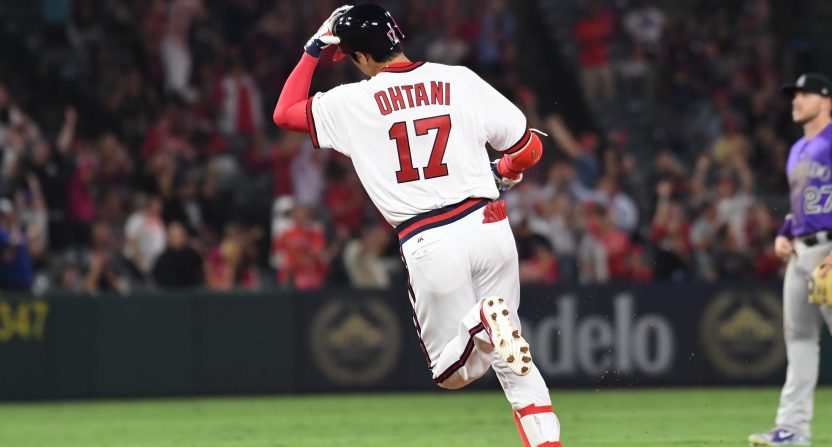 When Shohei Ohtani entered his first MLB Spring Training this season with the Los Angeles Angels, baseball evaluators very much believed in his ability on the mound, but were skeptical of the two-way player’s ability as a hitter.

And “skeptical” is putting it nicely. One scout even told Yahoo! Sports’ Jeff Passan in March that Ohtani is “basically like a high school hitter” because he didn’t see curveballs in Japan like the ones major league pitchers throw.

Another scout told Passan that hitters “don’t learn on the job in the major leagues.”

“You don’t learn on the job in the major leagues,” another scout said. “You can’t.”

And when Passan suggested that perhaps Ohtani is just such a special talent that he’ll quickly figure it out as a hitter, an AL scout said, “I don’t know if anyone is that special.”

Ohtani’s confidence in his bat is admirable, and perhaps he is the rare sort who can adjust on the fly, whose talent is overwhelming enough to change perceptions overnight. Special players do special things.

“That’s true,” an American League scout said, “but I don’t know if anyone is that special.”

Well, here we are in late August… and Ohtani has ridiculous numbers at the plate.

Shohei Ohtani is now averaging an extra-base hit every 7.2 at-bats.

Mike Trout, the major league leader in wRC+, is averaging an extra-base hit every 7 at-bats.

Ohtani’s 15th homer came on Monday night, when he crushed this a Jon Gray pitch 412 feet for a 3-run dinger in Anaheim:

This Sho is so entertaining! pic.twitter.com/QzxBYvAn0D

You can see Ohtani’s tremendous opposite field power there, along with his simple stride before the swing. He basically just turns his front foot back. This is a mechanical adjustment he made in the spring, when he ditched his leg kick. Once again, evaluators wondered if he’d be able to succeed with the mechanical adjustment and handle velocity from big-league pitchers. The results clearly show that he’s been able to do that.

And on the mound, Ohtani has been every bit as advertised. In nine starts, he has a 3.10 ERA, 3.28 FIP, and a terrific strikeout percentage of 30.8. He hasn’t pitched in a game since June 6 due to an elbow injury, but he’s working his way back and appears to be on the verge of joining the Angels’ rotation again soon.

Scioscia said Angels will continue to have Shohei Ohtani pitch on 6 days rest if he comes back this September. Scioscia said today’s 50-pitch sim game was good. He said Ohtani’s stuff is good enough to get major league hitters out right now. He has a bullpen in a couple days

The right-handed pitcher has shown off a fastball that sits in the 96-97 mph range and touches 101 mph, to go with wipeout breaking stuff.

On, probably, his 3rd and 4th best pitches (slider/curve).

When you can throw 100+mph & have a ridiculous Splitter…well, this is not fair. pic.twitter.com/XcY7NuRO2h

Ohtani hasn’t even finished his first major-league season and he’s already shown to be not just one of the best pitchers on the planet, but one of the best hitters as well. The guy is a complete freak. Let’s hope he can have better fortune with his health going forward and put on a show for years to come.