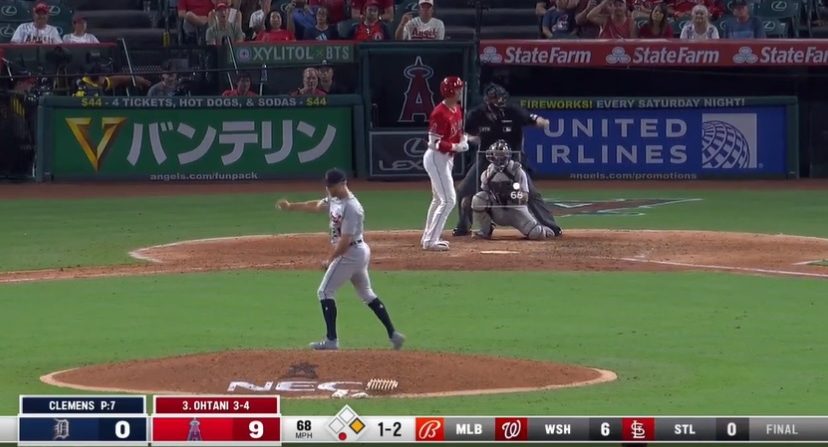 For most of Monday’s game against the Los Angeles Angels, pitchers on the Detroit Tigers had no answer for Shohei Ohtani. In the eighth inning, though, one Tiger finally found a way to quiet Ohtani’s bat. It’s safe to say that nobody saw this one coming.

Ohtani was already having a great day going into his eighth inning at-bat. He was 3-for-4 with two home runs, which helped the Angeles open up a 9-0 lead. Facing such a deficit, Detroit waived the white flag and opted to use Kody Clemens on the mound in the eighth inning. While Clemens — the son of seven-time Cy Young Award winner Roger Clemens — has pitching in his DNA, he’s a position player. Still, he had pitched on five previous occasions for the Tigers in 2022.

None of those five appearances on the mound produced a strikeout, though. It sure didn’t seem likely that strikeout No. 1 would come against Ohtani. But Clemens got the count to 1-2, then fired a 68-mile-per-hour pitch on the outside corner, which froze Ohtani. Umpire Paul Emmel rang Ohtani up and with that, Clemens had his first strikeout. Clemens immediately pumped his fist and when he got the ball back, tossed it into the visiting dugout.

Clearly, Clemens knew that this strikeout was a big deal. He was not the only one.

Several people in the baseball world loved the oddity of the achievement and found humor and joy at the moment.

(But Roger never struck out Shohei Ohtani, so…)

Awwwwww this is so cute!

Kody Clemens asked the ball he threw to strike out Shohei Ohtani to be kept for him.

Players not hiding their man-crush to Shohei is always so heartwarming 💙 https://t.co/vyEDNx8WKf

Baseball is the best!!

Angels manager Phil Nevin can cheer up Ohtani by pointing to his own record against the Clemens family: 1-7, 5 K. https://t.co/DWh5SAHZAX

Even in an absolute blowout between a pair of non-contending teams, baseball games can still provide lasting memories.