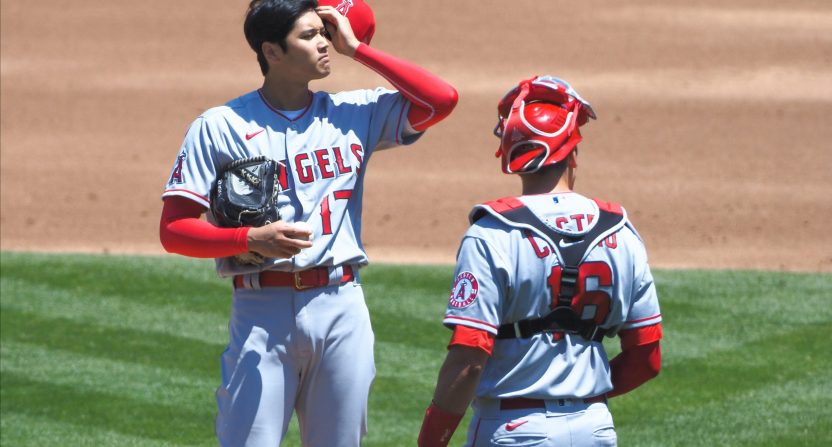 The Los Angeles Angels’ Shohei Ohtani returned to the mound on Sunday for his first pitching appearance since undergoing Tommy John surgery in 2018. And it did *not* go well.

Ohtani got the start in Oakland against the A’s, and failed to record an out. The right-hander allowed five earned runs, three hits, and three walks. He faced just six batters and threw 30 pitches.

After a bases-loaded walk drives in a run, @outtadapakmark tacks on 2 more and the @Athletics have an early lead on #MLBNShowcase! pic.twitter.com/V21mSYsBg8

The rally continues and it's 4-0 @Athletics in the 1st, with nobody out. #MLBNShowcase pic.twitter.com/MYFUO0a8DP

Brutal outings happen for any pitcher, and especially with the rust — particularly in the command department — that comes with not pitching in an MLB game in two years.

But what’s really concerning is that Ohtani’s velocity was *way* down from 2018. After averaging 96.7 mph with his fastball in 2018 (and occasionally touching triple-digits), Ohtani’s average fastball velocity was 92.9 mph on Sunday.

However, it’s a tiny sample, Ohtani hadn’t pitched in two years after undergoing Tommy John surgery, and velocity is down for many pitchers early in the season. So maybe he’ll see a velocity boost in his upcoming starts.

And when asked postgame about the velocity, Ohtani didn’t seem worried. Ohtani mentioned how he was aiming too much instead of just pitching/throwing.

Shohei Ohtani said he's not worried about his velocity. But he felt like he was throwing to try to aim up there instead of pitch. Says he's trying to shake off the rust.

Shohei Ohtani said he didn’t “let it eat” with his velocity as much as he would like during the outing.

On the velocity, Maddon said Ohtani had been a little higher than this during the intrasquad games, but doesn't sound like he was expecting 97-99 today (like in 18).

Maddon seemed more concerned with the command than velocity.

It’s far too early to jump to conclusions, but it’s absolutely concerning until we see the velocity increasing from the two-way sensation. And it’s a tiny season, so it would really help the Angels if Ohtani could see improvements sooner than later.