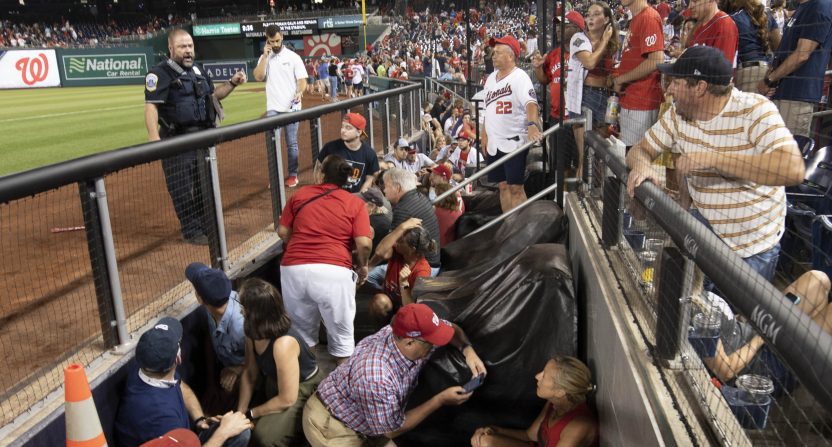 A terrifying scene at Nationals Park led to the suspension of Saturday’s night’s game between the San Diego Padres and Washington Nationals.

After the top of the sixth inning ended, gunshots from the outside the stadium could be heard. The gunshots could even be heard on the MASN broadcast.

If you listen closely as MASN is going into the commercial break, the gun shots can be heard and you can see the #Nationals players turn around as they head into the dugout as they host the #Padres pic.twitter.com/xBhnRvNN2L

This led to fans panicking and even running onto the field, and the PA announcer told fans to remain calm, explaining that the incident happened outside the stadium.

Hope everyone is safe at Nationals park. I heard a few loud bangs and then a mass exodus. View from my roof pic.twitter.com/MA1B7z83u2

Hear three gunshots fired behind our section 112 at Nats park. Being told to stay inside ballpark. "The action is outside the stadium" said announcer pic.twitter.com/N2EkGFVA6M

The Nats released a statement announcing that there was a shooting outside the third base gate, and encouraged fans to exit the ballpark from the center field and right field gates.

A shooting has been reported outside of the Third Base Gate at Nationals Park.

Fans are encouraged to exit the ballpark via the CF and RF gates at this time.

We're working with law enforcement to provide more information as soon as it becomes available.

Players — such as Padres star Fernando Tatís Jr. — went into the stands to find their family members to bring into the clubhouse.

Players, including Fernando Tatis Jr. Just ran into stands and grabbed family members and brought them to clubhouse. pic.twitter.com/DlC1bSv3I7

Shots fired outside Nationals Park. Many people, including Nationals SP Patrick Corbin, fled for the concourse. Many have taken shelter in bathrooms or suites. @nbcwashington pic.twitter.com/BephZ0kBVO

The DC Police Department announced that at least four people have been shot, and “it appears there is no ongoing threat at this time.”

MPD is responding to a shooting in the 1500 block of South Capitol Street, SW, in which two people where shot outside of Nationals Park. This is currently an active investigation and it appears there is no ongoing threat at this time.

Two additional victims associated with this incident walked into area hospitals for treatment of gunshot wounds. MPD is on scene and actively investigating at this time.

No update on whether the shooter outside the Nationals stadium has been taken into custody, or where at least two shooting victims have been taken by ambulance, per DC Metro Police source.

The Padres-Nats game is scheduled to resume on Sunday at 1:05 p.m. ET.

Tonight's game has been suspended due to an incident surrounding Nationals Park.

San Diego had an 8-4 lead when the game was suspended ahead of the bottom of the sixth inning.