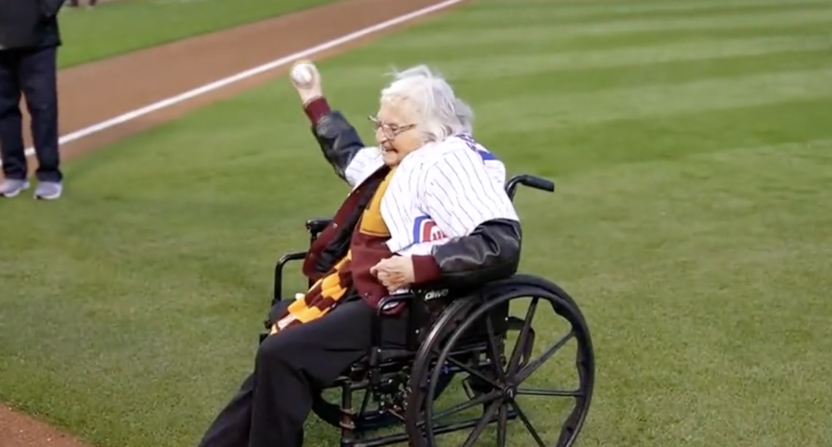 There aren’t many people still alive with memories of two Chicago Cubs National League championships, but the Cubs found one of them to throw out their opening pitch during Tuesday night’s game against the Philadelphia Phillies, inviting 103-year-old Sister Jean from nearby Loyola-Chicago to toss the game’s ceremonial first pitch.

Sister Jean, of course, is the chaplain for the Loyola-Chicago Ramblers men’s basketball teams. Sister Jean became an icon in the college basketball world and the sports world when the Ramblers shocked the world with their Cinderella story run to the NCAA Tournament Final Four in 2018.

Since Sister Jean is an icon in the sports world and local to the city of Chicago, the Cubs invited the 103-year-old to throw the game’s first pitch – and she did it, wheelchair and all.

While Sister Jean didn’t quite get the ball to the plate through the air despite the old-school windup and the much shorter distance, it’s still impressive that she was even able to do it in the first place, and the sports world reacted to her attempt accordingly.

Sister Jean with the HEAT

How bout you throw one in the playoffs? Please. https://t.co/So56ScltVs

Of course Sister Jean has been around about 20 years longer than Bugs Bunny https://t.co/t8bxYRj8PR

I hope I’m throwing out the first pitch at Wrigley when I’m 103! Sister Jean is force. #AMDG https://t.co/aN7hMWsPOK

Apparently, Sister Jean’s presence was enough to inspire the Cubs on Tuesday night as they defeated the Phillies 2-1 even despite their losing record.