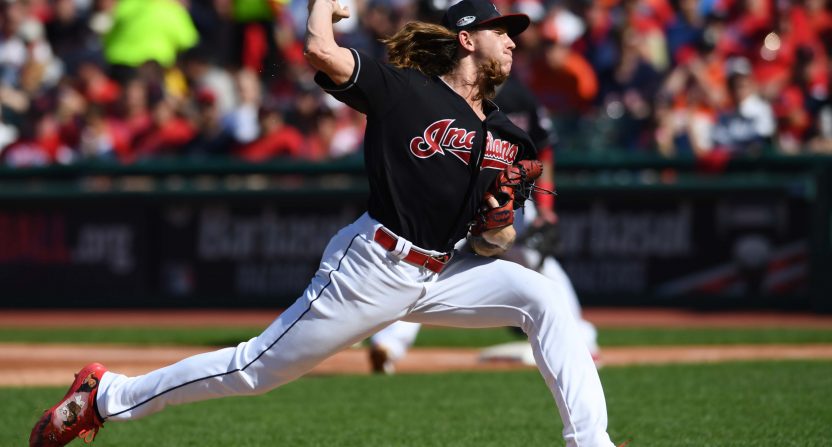 Cy Young voting is usually dominated by the same guys year after year. Max Scherzer hasn’t finished outside the top five since 2012. Clayton Kershaw was a top five guy in every year from 2011-17. Corey Kluber has been a top three guy in four of the last five years. But last year, two relative neophytes won the awards – Blake Snell in the AL, and Jacob deGrom (who had never finished higher than seventh) in the NL. This year, you can probably expect to see many of the same names at the top of Cy Young voting (including both of the reigning winners), but don’t be surprised if these guys collect some votes.

Shane Bieber, Indians. In his rookie season last year, the 23-year old Bieber had a 4.55 ERA over 114 2/3 innings. That isn’t great! But Bieber did strike out 118 hitters over those 20 appearances, walking only 23 along the way. He gave up way too many homers, but he has a filthy slider, and hopefully the Indians’ coaching staff has helped him learn how to pitch in the majors a little better with a full Spring Training in major league camp. After all, it’s worked so well for Trevor Bauer, Carlos Carrasco, Corey Kluber, and…

Mike Clevinger, Indians. Hey, another Indian! The 28-year old Clevinger, who the team acquired from the Angels back in 2014 for the immortal Vinnie Pestano, came into his own in 2018. In 200 innings over 32 starts, Clevinger pitched to a 3.02 ERA, striking out 207 and walking 67. In the second half of the season, his ERA fell by more than a run, while his strikeout rate ticked up by nearly five full percentage points. Those are all encouraging signs, and if Clevinger somehow manages to improve even more in 2019, he could supplant Bauer, Carrasco, or Kluber as one of Cleveland’s top three starters.

Tyler Skaggs, Angels. The issue with Tyler Skaggs has never been stuff – it’s always been health. He’s never had an ERA under 4.00 over his career, and has made just 20 starts in a season once. That came last season, when he tossed 125 1/3 innings with a career-best 4.02 ERA, 129 strikeouts, and 40 walks. If he can stay healthy all year, Skaggs could help drag the Angels into contention and himself into the conversation as one of the AL’s best pitchers.

Luis Castillo, Reds. I’m not sold at all on the Reds actually being contenders in 2019, but if they will be, Castillo will be a big reason why. His ERA rose by a full run from his 2017 rookie year to 4.30, but he still struck out 165 and walked 49 in 169 2/3 innings. However, his overall statistics are negatively skewed by a horrible first half of the season – in the second half, his ERA was just 2.44, while his strikeout to walk ratio was nearly 5:1. If those improvements are real, Castillo could be one of the best pitchers in the loaded NL Central.

Nick Pivetta, Phillies. The Phillies are expected to compete in 2019, and the rotation past NL Cy Young third-place finisher Aaron Nola will need to improve. Pivetta is one of the guys that will benefit from the team’s infield defense, as his FIP was a full run lower than his 4.77 ERA, thanks to a comically low 69% strand rate and way too high .326 BABIP. If those numbers normalize, which you’d expect they would, with Jean Segura at shortstop and Rhys Hoskins at first base, Pivetta’s 7-14 record could be flipped and his ERA could dramatically fall – and that would make him a potential Cy Young contender in the NL.

Jameson Taillon, Pirates. Taillon had his best, healthiest season in 2018, notching a 3.20 ERA over 191 innings along with 179 strikeouts and 46 walks. The walks were his biggest problem in 2017, and he managed to rectify that, and the 20 homers he allowed were just about his only problem in 2018. Given Taillon’s second half improvements (a 2.33 ERA, 76 strikeouts, and just 16 walks), he could carry that success into stardom in 2019.