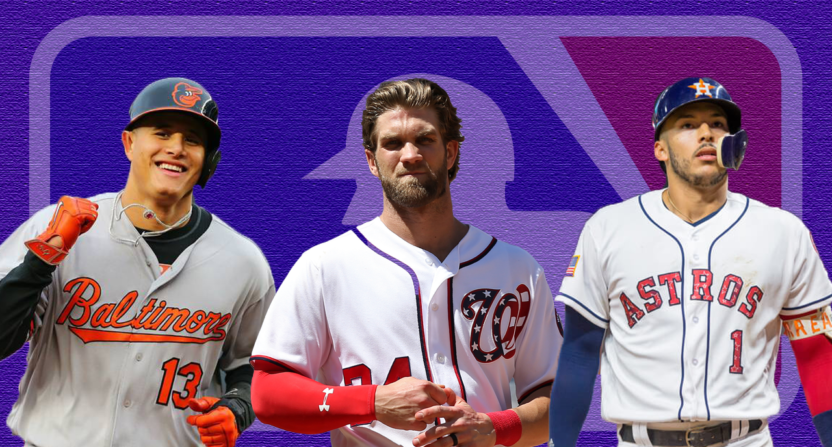 We asked our staff this week to share the MLB storyline they will be most carefully watching over the next six months of baseball. Here’s what they came up with:

Matt Clapp: It’s Shohei Ohtani, but to have something different, how about the New York Mets? Particularly, their starting rotation.

Noah Syndergaard was the second-best starter in baseball in 2016 but made only seven starts in 2017 due to a lat injury. He has looked fantastic this spring, but the human body isn’t supposed to be able to throw 100-mph fastballs and 93-mph sliders for 180+ innings.

Steven Matz was very good for the Mets in 2016, but he only made 13 starts in 2017 (with a rough 6.08 ERA) and underwent season-ending elbow surgery in August. Jacob deGrom has been excellent for four straight years and topped the 200-inning mark in 2017, but he’s been dealing with a back injury that didn’t allow him to make his first spring outing until March 11.

Zack Wheeler is another (at least formerly) talented arm, but he’s dealt with injuries that wiped away his 2015 and 2016 seasons, and he struggled in 2017.  Matt Harvey was great in 2013 and 2015, but his fastball velocity has taken a huge dive and he was brutal with a 6.70 ERA in 2017. Twenty-four-year-old Robert Gsellman is intriguing, but he disappointed with a 5.19 ERA last season.

And the recently signed Jason Vargas was an All-Star for the Royals in 2017… and then had a 6.38 ERA in the second half.

There is something to like about all of these guys, but there are question marks all over the place. If Syndergaard and deGrom stay healthy, and the Mets can get decent production out of the rest of their rotation, they will be in the wild-card mix. Heck, they may even hang in the NL East race for much of the year. But if the rotation deals with injuries and disappointments again, it’s easy to see this being a 70-win team like it was last season.

There probably isn’t a more difficult team to project than the Mets with all of this uncertainty, and that’s what will make it so interesting to watch unfold.

Andrew Bucholtz: I think the most interesting storyline to watch is going to be the fight for the wild-card playoff spots in both the AL and the NL, and what that means in terms of trade deadline movement. Most division titles seem relatively easy to predict, with the main argument “Yankees or Red Sox?” in the AL East, but as we’ve discussed before, there are plenty of teams that could make a wild-card push.

In the AL, the Yankees-Red Sox loser and the Angels seem like obvious picks, but teams like the Twins or Blue Jays could make a run, and in the NL, there are lots of contenders, from the Diamondbacks to the Cardinals to the Giants to the Brewers.

But all of those wild-card contenders have at least some significant flaws, and many of them are relying on at least a few older players. For me, it’s going to be fascinating to see where those teams are around the deadline and what decisions they make as a result of that. If they’re in the hunt, do they go big with a couple acquisitions and hurt their prospect pipeline? If they’re a little ways back, do they stand pat in hopes of a late-season run, or do they start selling off their older pieces?

There could be some teams not mentioned here that aren’t generally seen as playoff contenders, but have a good start to the year and are in the hunt near the deadline. Will they pick up some rentals and hope for the postseason, or continue on with a longer-range plan?

Decisions like this happen every year, of course. However, I think they’ll be particularly interesting in 2018 given how the wild-card contenders mostly seem a step below the division winners (so how worth it is it to actually push for one of those spots?), given the players that could potentially be on the move if a preseason wild-card contender struggles and decides to sell, and given how open the wild-card races appear.

Joe Lucia: I’m interested in the final seasons of Bryce Harper and Manny Machado before free agency. Will they have dominant, MVP-caliber seasons leading into free agency? Will they struggle with injuries, as both have in the past? Will Machado get traded by and Orioles team that looks, at best, like the third-best team in the AL East? Will Harper finally drag the Nationals to a playoff series victory? It’s all very interesting with these two.

Jay Rigdon: Is the ball juiced? There’s ample evidence to suggest it is, and if the home run rates continue to rise it’s going to be tough to deny that something about the baseball has changed. And changing the ball is changing the fundamental nature of the game; hell, that’s what the sport is called.

But MLB is in a tough spot; how can they say “We’re going to change something about the ball!” without admitting that they knew something has been different this whole time? Rob Manfred has backed himself into a corner on this, and it’s going to be interesting to see what happens going forward.

Ian Casselberry: Zack Greinke’s health is a story to watch, certainly early on if not throughout the season. His decreased velocity raised eyebrows in the spring, just before he was sidelined with a groin injury. Were those issues typical of spring training, when pitchers develop “tired arm” as they stretch out and build their stamina? Or are these signs of concern for a 34-year-old hurler going into his 15th major league season with nearly 2,500 innings on his right arm and an increasing reliance on his slider?

Greinke was outstanding last season, notching a 3.20 ERA, 215 strikeouts in 202.1 innings, and 17-7 record. He ranked third in the National League with a 5.1 WAR. So there don’t appear to be obvious signs of decline. It’s difficult to imagine the Diamondbacks contending for a wild-card spot or keeping up with the Dodgers in the NL West with Greinke missing significant time (coupled with Steven Souza Jr.’s injury) or diminishing skills, even if Arizona does have starting pitching depth. But if he pitches like a Cy Young Award candidate, the DBacks will be in the race.

Alex Putterman: I remain absolutely fascinated with baseball’s Super Seven: the Astros, Dodgers, Cubs, Yankees, Red Sox, Indians and Nationals. Because although those teams all look fairly unstoppable on paper, especially as compared to the opponents they’ll battle with, the odds are they won’t all live up to expectations.

After last year’s divisional races played out exactly as expected, it’s easy to forget that most of the time baseball is damn hard to predict, but that’s the truth. Just ask the 2015 Nationals, 2014 Red Sox, 2012 Phillies or any of the other highly touted teams over the year that have fallen short of what everyone projected them to accomplish.

I’m fairly confident that at least one of the Super Seven will slip up and lose the playoff spot we have all reserved for it. Which team that will be, I have no idea. That’s what I’ll be watching more closely this season.