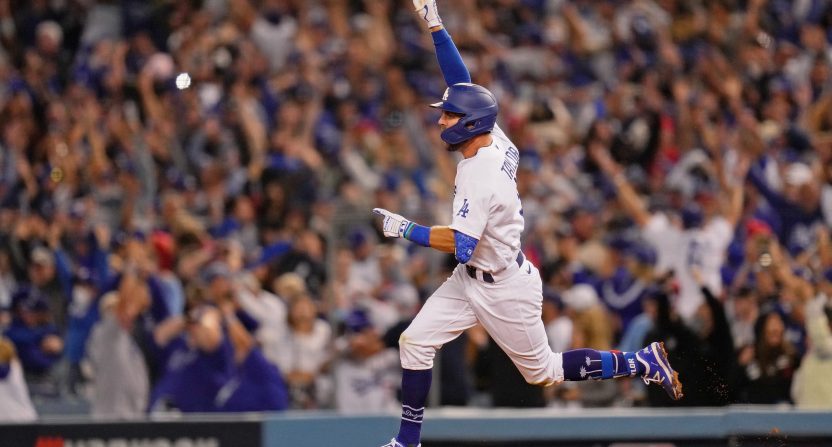 The Los Angeles Dodgers got a 3-1 walk-off victory over the St. Louis Cardinals to win the NL Wild Card Game on Wednesday night at Dodger Stadium. Here are our main takeaways from the Dodgers’ victory that locks up a spot in the NLDS, and sends the Cardinals home:

Chris Taylor walks it off with a 2-run homer

Over more than four hours of baseball, the Dodgers and Cardinals each had just one run entering the bottom of the ninth inning. And with two outs, Chris Taylor broke that tie with a two-run homer to give the Dodgers a walk-off victory. The home run came vs hard-throwing reliever Alex Reyes (29 saves this season), who had just entered the game for this matchup. Taylor had only been in the game since the seventh inning himself (and also made a nice play on defense to catch a sinking line drive in left field).

Chris Taylor with the walk-off homer for the Dodgers in the NL Wild Card Game! ⚾️💣 pic.twitter.com/pIHYmUIgfF

Here’s how it sounded on the Dodgers’ and Cardinals’ radio broadcasts:

As called on Dodgers radio: pic.twitter.com/ZZ9TZ3aYIy

As called on Cardinals radio: pic.twitter.com/HEoFnJ96jz

Cody Bellinger also was a hero here, drawing a walk with two outs in the inning before stealing second base, something he did twice on the night. Bellinger had a nightmare season with a .165/.240/.302 slash line and -0.8 WAR according to FanGraphs. But he played a huge part in the Dodgers winning their biggest game of the season.

Of course, Chris Taylor is the hero for the Dodgers. We all picked that, right?

But kudos to Cody Bellinger, who drew a walk beforehand and stole second base. Wow https://t.co/WAMzlFRhTV

Los Angeles manager Dave Roberts removed Scherzer from the game with one out in the fifth inning at 94 pitches with a runner on base. Scherzer naturally wasn’t happy about that decision.

Max Scherzer did not want to come out of the game after 4 1/3 innings.

Scherzer also gave a shirtless interview after the game.

The TBS studio crew was caught by surprise with the shirtless Max Scherzer interview. 😂💪⚾️ pic.twitter.com/FHCgjSd8md

But the Dodgers’ bullpen was brilliant, with five relievers combining to throw 4 2/3 scoreless innings. Joe Kelly made great pitches to get out of the fifth inning (saving Roberts from plenty of criticism).

Joe Kelly makes Dave Roberts look smart, striking out Dylan Carlson on a nasty curveball to get out of the 4th. 1-1 tie! pic.twitter.com/Fb9DMJzGRx

And Kenley Jansen blew away Tyler O’Neill with high heat to leave a runner in scoring position in the top of the ninth.

The Dodgers tied the game in the bottom of the fourth when the frequently clutch Turner came through with a solo blast against Adam Wainwright (who was otherwise terrific, with just this one run allowed in 5 1/3 innings).

The only active NL player with more postseason HR is sitting in his dugout.

Right. That would be Albert Pujols. With 19.

Even with needing a one-game playoff to get into the Division Series, the Dodgers entered this game as the World Series title favorites, according to FanGraphs (15.9% odds), Five Thirty Eight (25% odds), and oddsmakers.

After the win, FanGraphs increased the Dodgers’ title odds to 24.8%, and Five Thirty Eight increased the odds all the way up to 34% (double the next-highest odds with the Tampa Bay Rays at 17%).

But now they have to get through the team that beat them out for the NL West crown.

Dodgers and Giants meet in postseason for first time ever

Well, this is going to be a blast. Two teams that hate each other and that have each won 107 games this season (after the Dodgers’ WC victory) are finally meeting in the postseason for the first time.

Can the Giants keep their magic going and top the Dodgers in the postseason too? Oracle Park will be rocking on Friday.

After being 71-69 through 140 games, the Cardinals rode a 17-game winning streak in the final weeks to a stunning Wild Card berth. And they were tied with two outs in the bottom of the ninth inning vs the defending champion and current title favorites. This St. Louis squad is surely frustrated after a heartbreaking loss, but they have no reason to hang their heads. They maxed out their roster and were fantastic when it mattered down the stretch.