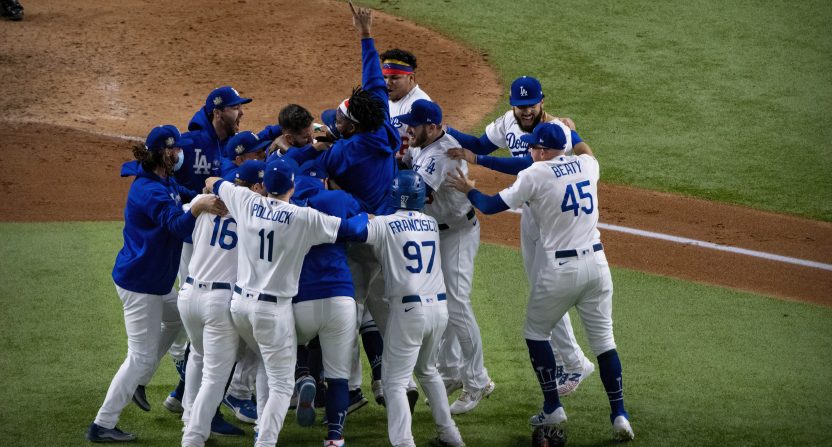 The Los Angeles Dodgers are World Series champions. Los Angeles beat the Tampa Bay Rays 3-1 in Game 6 to win the title. Here are our six main takeaways from the title-clinching victory:

Finally, the Dodgers got it done

It’s been 32 years, but it surely felt a lot longer to Dodgers fans (and especially for Dodgers fans that haven’t experienced one at all). The Dodgers have been knocking on the door year after year. Eight straight division titles. 12 playoff appearances since 2004. Three NL pennants since 2017. They’ve been the NL’s most dominant franchise in the 21st century, but didn’t have the one thing that ultimately mattered during the run: a championship ring. Now they do.

Frankly, there’s been a lot of bad luck involved. It would’ve been particularly gut-wrenching to not come away with a title this time, when they were a full-on juggernaut, and clearly the best team in baseball.

As fun as it is for the cool stories, upsets, etc, it's nice to see the best team rewarded in a sport and format that makes it so tough.

Nobody knows more than the Dodgers how random and difficult things can get in October, regardless of talent level. But the best team definitely won this time. And they will be one the title favorites for many years to come, with a loaded roster and still-young core (and great farm system), and the NL’s best resources. It would be surprising if they have to wait another 32 years for their next title.

In the eighth inning, Justin Turner was removed from the game, and it turns out it was due to a COVID-19 test. The details are still coming out (and we keep updating our article about it), but it appears that Turner tested positive twice, with the results of the first test (which took place on Monday) being learned in the second inning of Game 6. Turner then took a second test, which also came back positive.

Despite this, Turner then joined the Dodgers on the field for a team photo, and without his mask on. Fox Sports’ Ken Rosenthal reports that Turner was told to not go onto the field, but he and the Dodgers “insisted upon” it.

According to Ken Rosenthal, Justin Turner tested positive for yesterday's test, had a second positive test this evening and was also told not to go on the field and did anyway. pic.twitter.com/Xm1QjzW95X

One correction to what I said on @FS1 about Turner timeline. First result, on the test from yesterday, came back in the second inning, not in the afternoon. His test from earlier today was then expedited, and when it came back positive, he was removed from the game.

So, we’re left with many more questions than answers here, and there’s sure to be more coming on this story.

Kevin Cash’s decision will be criticized for a long time

In the bottom of the sixth with the Rays leading 1-0, Tampa Bay Rays manager Kevin Cash chose to remove starting pitcher Blake Snell from the game after Snell allowed a single with one out. Snell had been cruising at 73 pitches, with only one other hit allowed, zero walks, and nine strikeouts. But Cash chose to bring in relief pitcher Nick Anderson.

The decision *did not* work out. Anderson quickly allowed two runs, and that would end up being the difference on the scoreboard.

And that's immediately followed by a Corey Seager groundball that scores Mookie Betts. The Dodgers take a 2-1 lead. #WorldSeries pic.twitter.com/VCWqYPkWwe

The Rays have been aggressive with their pen usage all year, and have had analytics-driven decisions with great success. But in this particular instance, Cash should’ve probably kept in his lefty for at least the rest of the inning, and it’s not like there was another start to save Snell for.

We’ll never know, but it’s very possible that there would’ve been a Game 7 had Cash just stuck with his ace. What we *do* know for sure is that this decision will be debated (and mostly criticized) for a long time.

Well, the Mookie Betts trade certainly worked out for the Dodgers, and you can understand why they signed him to a $365 million extension. Betts put his remarkable all-around skills on display all postseason, and capped it off with a big World Series-clinching night.

Betts hit a double in the sixth before using his tremendous baserunning to score the go ahead-run, and then hit a home run to give the Dodgers the 3-1 lead in the eighth.

0-2 pitch right down the middle is not a recommended strategy vs anybody, and especially vs Mookie Betts.

If only the Rays had a starting pitcher cruising at a low pitch count. #WorldSeries pic.twitter.com/hCjdumYNwx

Mookie Betts is the first player ever to win MVP and a World Series title with 2 different franchises before turning 30 years old.

Mookie Betts joins Lenny Dykstra (1993) and Lou Brock (1968) as the only players with 4 SB and multiple HR in a World Series. pic.twitter.com/yxNbh221B3

Let’s not forget what Randy Arozarena did

The Rays may have ultimately come up short, but it certainly wasn’t Randy Arozarena’s fault. Arozarena added to his MLB postseason record with home run No. 10 to open the scoring in Game 6.

Looked at first like Randy Arozarena might not have gotten a full swing on this, but nope – his bat is just that quick. 1-0, #Rays pic.twitter.com/WLXY4kExc7

An absolutely unbelievable playoff run from the rookie, and it will be fun to follow his future. At the very least, he’s already locked up one of the greatest postseasons in MLB history.

Corey Seager is the 8th player to win both LCS and World Series MVP honors.

He is the 6th shortstop to win the World Series MVP award, and the first since Édgar Rentería in 2010. pic.twitter.com/puIkumt90Y