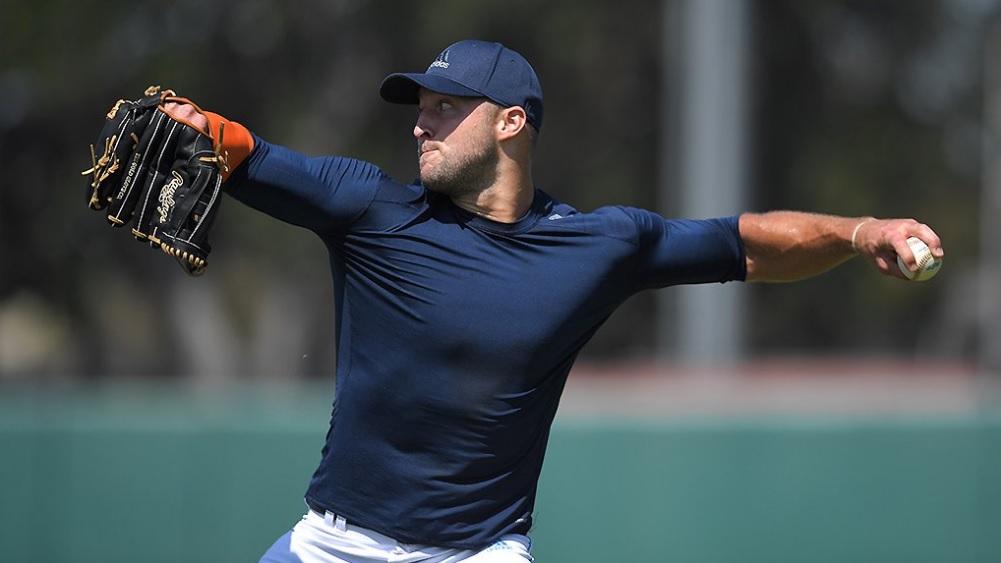 Today was the day football bust Tim Tebow picked up a bat and a glove and tried to prove to baseball scouts and media members alike his dream of playing professional baseball was not just a gimmick. Tebow’s long-awaited baseball audition drew quite a crowd, as you might have expected by now, and it only made sense that Skip Bayless would make an appearance.

The former First Take co-host and new Fox Sports 1 loudmouth did indeed show up to see what his football hero Tebow could do on the diamond. As we have come to expect from Bayless over the years, he had some positive things to say about Tebow’s future in professional baseball.

Tebow looks like he could be a serviceable outfielder. He took balls in only right and center but probably destined for left.

Remember, Tebow took flies in center looking into a hellacious sun. Did not bobble or miss a one.

Tebow taking fly balls in center: Looks decent. No bobbles. Good range. One stumble when planted on the warning track after tracking 1 down.

Tebow taking balls in right field, throwing to 2nd, 3rd, home. Above average arm strength, some throws on the money, some off line.

Tebow just ran a 60-yard dash for scouts. No surprise: Looked sensational. At 29 he's still a big stud athlete who can run.

OK, so Skip seems somewhat impressed by what he saw from Tebow. But we sort of expected that, right? After all, this is the same guy who went out of his way to suggest Tim Tebow was going to be a star in the NFL, despite time and time again being proven wrong.

For Skip, it boiled down to being burned by Tebow when he picked Oklahoma against Florida in a national championship game. Since then, when Tebow and the Gators claimed victory over the Sooners, Skip has done anything and everything to sing the praises of Tebow. So if you don’t feel Skip’s baseball scouting is worth very much, take it from some others more respected in the baseball world.

AL scout was impressed by Tim Tebow's raw power too, but didn't have as high-grade when asked, "Wrote him down 65 raw, probably 55 in-game."

Tim Tebow hit this ball well out, scout estimated at 430, hit another one over Dedeux Field scoreboard by 20 feet pic.twitter.com/DciJrpFl01

Tim Tebow hit the fourth BP pitch to where I circled the red-dot… uh huh… pic.twitter.com/9Om5gHnA5R

So Tebow has some power in his swing. This is not too surprising given his build. Is Tim Tebow a five-tool player? Not likely, but he did reportedly show off some more skill that might suggest this whole baseball dream may not be as far-fetched as many expected it to be. For starters, the dude can run…

So perhaps there is something scouts will take back to their bosses, and there will be some positives to point out. The bottom line, however, is Tebow is very much a project that would be blooming very late in a professional baseball player’s career. That is not to say he can’t play ball on some level, but anything more than a minor league prospect would be a wild reach just based off of what we know at this point.

Will some major league franchise take a chance on a publicity stunt? We can never rule that possibility out, but let’s take things one step at a time here. We can also have a good laugh too…

Congrats to Tim Tebow for going 8 for 19 in today's baseball tryout, thus outperforming every NFL game he ever played.

Kudos to Tim Tebow for effort,but in words of 1 scout:He looked like an actor trying to portray a baseball player.' https://t.co/lW1oYW5mu6

Adidas is all in, though. The apparel company has signed Tebow to a new deal, according to Darren Rovell of ESPN. Tebow worked out in front of scouts wearing Adidas gear. Tebow also has a contract offer from a Venezuelan winter ball team.