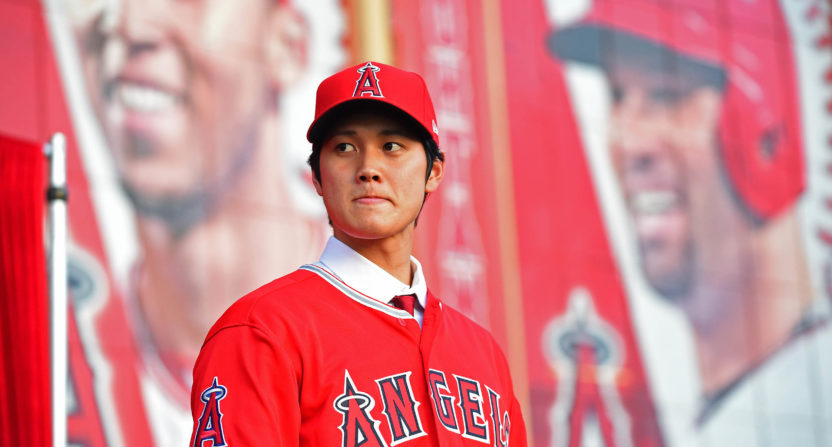 On Tuesday night, Yahoo Sports’ Jeff Passan made Twitter go crazy with a report that the Angels’ newly signed Japanese two-way star Shohei Ohtani has a “damaged ulnar collateral ligament in his pitching elbow.” Passan added that Ohtani “underwent a platelet-rich plasma shot in October in hopes of treating the elbow pain caused by it.”

When you see the words “damaged ulnar collateral ligament,” the most common three-word reaction is “Tommy John Surgery” (or “Doctor  James Andrews”).

But, as Passan — author of the tremendous book on this sort of topic, The Arm — goes on to explain in the article, it’s only a first-degree sprain, the least severe of UCL injuries.

Literally nobody actually reading the Ohtani article lol. It's a first-degree sprain.

Now, it’s absolutely a cause for concern, and more damage could indeed lead to Tommy John Surgery. Ohtani even needed a platelet-rich plasma shot (PRP) because of the discomfort he was experiencing.

As the Los Angeles Times‘ Dylan Hernandez says, it would obviously be better for Ohtani to not have this UCL issue. However, the right-hander should be able to recover without surgery.

Re: Ohtani: I'm told that with a first-degree sprain, there are no problems with the integrity of the ligament. Just irritation/inflammation. Better not to have, obviously, but should be able to recover without surgery. Second-degree sprain would be considerably worse.

The Yankees’ Masahiro Tanaka suffered a partially torn UCL on his pitching elbow in 2014, and, like Ohtani, underwent PRP treatment (and rested for six weeks). So far, Tanaka hasn’t needed Tommy John Surgery, and has put together a 3.76 ERA and 9.6 fWAR in 532 innings over the last three seasons (and had a 0.90 ERA in three 2017 postseason starts). Every case is different, but Tanaka’s ability to pitch through the UCL issue is certainly encouraging for Ohtani’s hopes of doing so.

Additionally, Angels general manager Billy Eppler says the team put Ohtani through multiple MRIs which showed “no signs of acute or new trauma in the elbow.” Eppler adds that the results “looks consistent with players his age.”

The Angels put Shohei Ohtani through a physical on Thursday. GM Billy Eppler said multiple MRIs showed “no signs of acute or new trauma in the elbow.” He said the state of his elbow was “consistent” with similarly aged pitchers.

Basically: A lot of pitchers have first-degree tears in their elbows. Some of them later require Tommy John surgery; some don’t. There’s no telling now what Shohei Ohtani’s future will hold, but as of now he can pitch.

While the Ohtani headline is attention grabbing, I do believe that the UCL sprain and PRP injection were disclosed to all teams.

One scout I spoke with tonight: “We already knew that.” https://t.co/gCvhqJlfbO

And even if it turned out Ohtani needed Tommy John Surgery, it wouldn’t have changed much about teams’ interest in him. It’s almost assumed these days that a pitcher is going to need such an operation at some point of their career, and especially when talking about a guy that is already throwing 102-mph fastballs and wipeout sliders at the age of 23.

The Angels have Ohtani under team control for six years and are paying him just a $2.3 million signing bonus, and the league minimum for the first three seasons before he’s eligible for arbitration (really, the main thing is the $20 million posting fee owed to the Nippon-Ham Fighters). It would obviously stink for the Angels and their playoff hopes if Ohtani needed surgery and missed a season, but ultimately he would still be an unbelievable value if he’s anything like the player we think he will be (The Atlantic even said Ohtani may be the most underpaid man in the world). It basically just takes just two productive seasons for Ohtani to be well worth the money for the Angels (and this is just in terms of his baseball performance; he will help with the Angels’ attendance, marketing, and merchandise sales).

FanRag Sports’ Jon Heyman was told by one evaluator that Ohtani would still be viewed as a “$200 million talent” with the UCL issue:

This news on Ohtani’s UCL is concerning and something for the Angels to monitor, but right now that’s all it appears to be. Maybe he needs Tommy John Surgery down the road, but then again he’s a pitcher (< I could just stop there) throwing 94-102 MPH with filthy sliders and forkballs every outing for several innings, so this was always a possibility.

1 thought on “It sounds bad, but Shohei Ohtani’s ‘damaged UCL’ might not be a big deal”