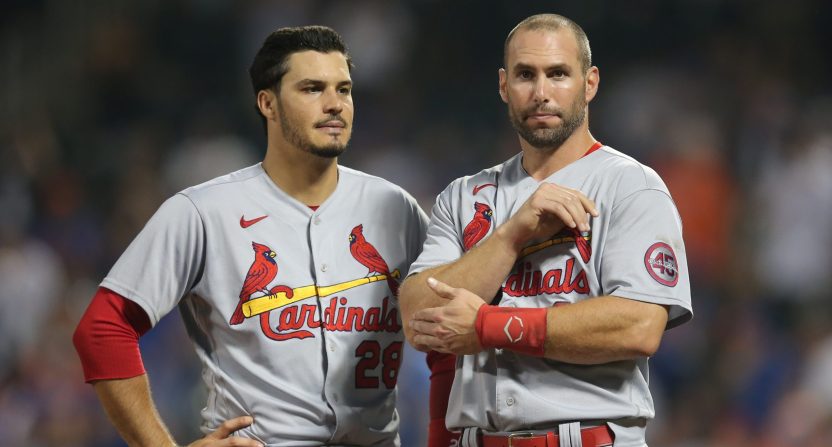 The St. Louis Cardinals will be without two superstars when the team travels to Canada to face the Toronto Blue Jays for a two-game series on Tuesday and Wednesday.

NL MVP candidates Nolan Arenado and Paul Goldschmidt aren’t vaccinated for COVID-19, and Canadian regulations don’t allow unvaccinated people to enter the country. Goldschmidt (5.1 WAR) and Arenado (4.8) are No. 2 and 3 in MLB (and lead the NL) in wins above replacement, according to FanGraphs. Veteran catcher Austin Romine is also unvaccinated, and pitcher Jovan Oviedo can’t travel because he has an expired passport.

All-Star infielders Nolan Arenado and Paul Goldschmidt and catcher Austin Romine will not make the trip to Toronto with the team due to Canada’s vaccination rules, Mozeliak tells local media on Zoom.

Johan Oviedo has an expired passport and will not be able to travel.

Putting aside the worldwide health ramifications of the vaccine, the Cardinals aren’t close to the same team without Arenado and Goldschmidt. Additionally, the Cardinals are in the thick of the NL playoff race, 2.5 games back of the Milwaukee Brewers in the NL Central and holding a one-game lead for the third NL Wild Card slot. Each game the rest of the way could be the difference in the Cardinals reaching the postseason or not.

Oh, and then there’s the fact that the Blue Jays currently hold the top of three AL Wild Card slots and have a 95.7% chance to make the postseason per FanGraphs. They’re given a 14.7% chance to reach the World Series, the sixth-highest odds. So, if the Blue Jays reach the World Series, these unvaccinated players wouldn’t be able to play road games in Toronto.

Would Arenado and Goldschmidt *really* choose to miss a possible Game 6 and Game 7 of a World Series?

Well, after the Cardinals lost 6-3 to the tanking Cincinnati Reds on Sunday, Arenado and Goldschmidt were asked about their decision to not be vaccinated.

Arenado said that he doesn’t feel he “needed” to get it and added that he’s “very safe.”

Here is what Nolan Arenado had to say about his decision not to be vaccinated, asked how long he considered it: pic.twitter.com/hQ8jbgQH0s

Before the game, Cardinals president of baseball operations John Mozeliak alluded to Arenado’s desire to start a family as a reason for being hesitant to get the vaccine.

Arenado was asked about that and said, “Yeah, that’s part of it.” He added, “And it just sucks we can’t all be on the same page about it.”

He was asked if part of it was his desire to start a family, and was asked if he talked to the team’s head doctor about it. Here’s his answers to those questions: pic.twitter.com/pPO4N9IJ8Y

Arenado referenced speaking to doctors, as did Goldschmidt, who added, “And so I think you’ve got to put your health above everything.”

Mozeliak shares that he had a conversation with Arenado in which Arenado expressed a desire to start a family soon, which informed some of his hesitance.

COVID-19 vaccines do not cause infertility.

And then Cardinals starting pitcher Miles Mikolas — who was the losing pitcher in Sunday’s game, and proceeded to wear a cowboy hat that led to quite the slip-up from Al Hrabosky on the Cardinals’ postgame show — told the media that he wishes he never got the vaccine.

Mikolas: “I wish I had also not gotten the vaccine, but it’s a personal choice.”

When asked why he feels that way, Mikolas expanded: “Because a lot of the stuff coming out about it, I don’t think is great. I’m pretty healthy. I don’t think it was 100% necessary. But I got it at the time; it seemed like a good idea. But looking back, it’s one of those things that maybe I’d have rather not gotten it.”

Here’s the Mikolas postgame media session (his vaccine thoughts are at the 1:32 mark):

Mikolas on the players who will not be accompanying the #STLCards to Toronto: "I wish I had also not gotten the vaccine, but it's a personal choice." pic.twitter.com/nY3hCCdpLv

and worth noting: the rules cut both ways. This is not about Canada. Same rules apply for entry to the US. Just, all Jays are vaccinated

Friendly reminders…
1) while teams like STL occasionally miss key players for a couple games, all non-vaxxed players are unavailable to Jays as long as current border rules exist. Means Jays have access to smaller player pool
2) those border rules cut both ways… US has same

This comes after Philadelphia Phillies star catcher J.T. Realmuto recently said, “I’m not going to let Canada tell me what I do and don’t put in my body.”

Additionally, NBA star Andrew Wiggins of the Golden State Warriors recently made comments similar to Mikola’s: “I still wish I didn’t get [the COVID-19 vaccine], to be honest with you.”