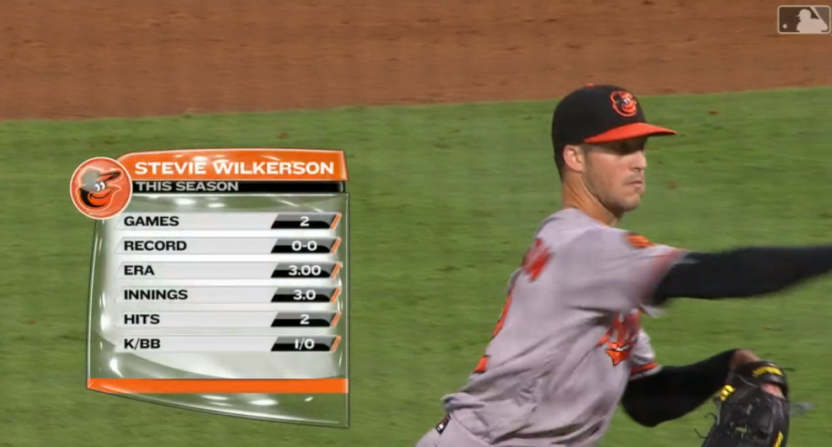 MLB saves have seen a lot of changes over the years, from Allen Roth’s tinkering with the idea in the early 1950s through Jerome Holtzman’s original popular proposition in 1959 through differing MLB-adopted efforts in 1969 and 1974 through the creation of the modern statistic as we know it in 1975. But since MLB officially adopted saves in 1969, there had never been a position player who recorded one until Thursday. That would be Baltimore Orioles’ center fielder Stevie Wilkerson, who pitched a one-two-three bottom of the 16th to give the Orioles a 10-8 victory against the Los Angeles Angels despite not throwing a pitch faster than 56 miles per hour. MLB.com’s Joe Trezza has more:

“I knew we were running thin on guys,” Wilkerson said later, in a dizzy postgame clubhouse. “I knew it was a possibility when the game was getting late.”

Flash forward three innings, two lead changes and the back end of a near-endless night later, and that’s exactly what happened. After the Orioles gave back a three run lead in the bottom of the 15th, slumping second baseman Jonathan Villar put Baltimore ahead again with a two-run homer in the top of the 16th. That set the stage for Wilkerson, who floated in mid-50-mph lob balls while working a 1-2-3 bottom of the 16th to cap the second longest game in Orioles history as a 10-8 victory.

…“I don’t think I’ve wrapped my head around it yet,” Wilkerson said.

Wilkerson is in just his second season in the majors, but he’s previously been called upon to pitch. Entering this relief appearance, he’d pitched three innings this year across two games (both earlier this month), allowing two hits with an ERA of 3.00, plus one strikeout and no walks. And in the 16th here, he got Brian Goodwin to fly out to center, Kole Calhoun to ground out to shortstop, and Albert Pujols to fly out to center. Under the since-1975 save rule, that qualifies, as Wilkerson entered the game as a pitcher with a lead of three runs or less and pitched for at least one inning, and was the finishing pitcher but not the winning pitcher. Here’s video of Wilkerson’s efforts:

There aren’t that many things in baseball that haven’t been done before, but until Thursday, a position player officially collecting a save was one of them. Thanks to Wilkerson, that’s no longer the case.