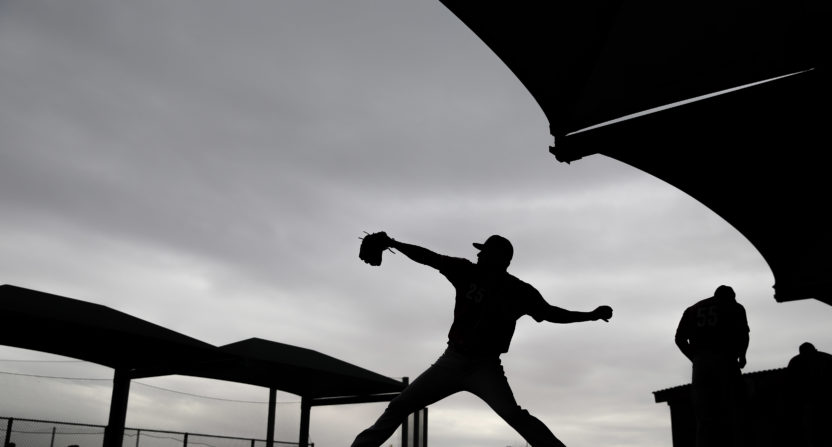 Though it remains icy and cold in much of the country, and though numerous notable free agents remain unsigned, pitchers and catchers have officially reported in Florida and Arizona, meaning it’s time for baseball.

But before the games start counting, we’ve got six weeks of workouts and exhibitions to trudge through. With Spring Training upon us, we asked our writers what they will most carefully watch for over the next month and a half. It turns out that for most of them, it isn’t the baseball.

What storyline will you be paying most attention to during Spring Training?

Andrew Bucholtz: The storyline I’m most interested in is actually outside of teams’ Spring Training, and it’s which of the unsigned players still out there get picked up and for what prices. There are so many capable players without contracts right now, and it’s fascinating to ponder what’s going to happen there.

Are some of the players going to take less and sign shorter-term deals just to land with a team and get playing, and then hopefully do better in the next negotiating round? Are some going to continue to demand more than what’s being offered even as the season gets closer and closer, or even risk remaining unsigned in hopes teams will come around once the season starts and injuries or losses begin to pile up? What roles will the union and various powerful agents play? And are some teams going to decide it’s time to start throwing more money around, or will they all continue to hold the line?

There are a whole lot of ways this could go, and the results could have major impacts on MLB this year and beyond.

The second American League Wild Card slot (on paper) is screaming, “SOMEBODY PLEASE COME WIN ME!” A team like the Angels, Twins, Blue Jays, could greatly boost their playoff chances by signing a Martinez or Arrieta.

If we’re looking for a storyline about the actual Spring Training games, it’s how Shohei Ohtani looks. There’s so very little to take away from performance in exhibition games, but it will be fun to see how Ohtani looks both on the mound and at the dish in his first MLB camp.

Ian Casselberry: I’m intrigued by the free agent training camp. How hard will these guys go at it? No one will want to risk getting hurt, but what kind of timeline will pitchers follow — especially if some remain unsigned and get to the “tired arm” phase that has to be worked through during the spring.

But I’ll also be following what goes on with the Red Sox in Fort Myers. Will they sign J.D. Martinez? How long will they let that go into the spring if no other teams show interest? And if they wait, does that create problems with other roster moves that would have to be made after signing Martinez, like trading Jackie Bradley Jr.?

Then there are lingering issues from last season. How will new manager Joey Cora handle a clubhouse that John Farrell lost control of last season? Will David Price continue his feud with the media and keep tensions high among players? Mookie Betts and Xander Bogaerts acknowledged those clubhouse issues as spring camp opened. Is there a lack of leadership in the locker room? Does the team miss a veteran presence like David Ortiz that kept spirits high and the atmosphere loose?

That’s quite a bit for a contending team to deal with before the season even begins.

Joe Lucia: The storyline I’ll be paying attention to in Spring Training has nothing to do with Spring Training itself: When will the remaining top tier free agents sign? After all, guys like Jake Arrieta, Eric Hosmer, and Mike Moustakas can’t go into the month of March still on the free agent market, right? RIGHT?

There are far too many good players out there who need jobs and as long as they aren’t signed, this is the story that will dominate baseball.

Alex Putterman: I’m a little surprised everyone here is so focused on free agents. Aren’t we ready for actual baseball?

I’ll be watching how much contending teams trust young players with key responsibilities. Will the Yankees really follow through on playing rookies Miguel Andujar and Gleyber Torres at third and second base, respectively? Will the Indians entrust center field to Bradley Zimmer? Will the Astros make room for Derek Fisher or even Kyle Tucker? Will the Cardinals rely on pitchers Jack Flaherty and Alex Reyes? Could Walker Buehler crack the Dodgers’ Opening-Day rotation? Might Alex Verdugo play left field?

With so many good teams hesitant to spend on free agents this offseason, promising young players will get a chance to play outsized roles. This spring could help indicate which ones are up to the challenge.