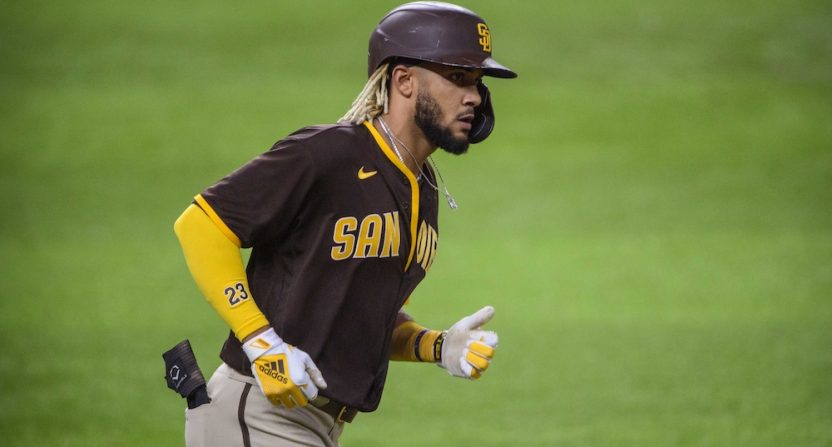 Are we really doing this in 2020? Is baseball still grumbling about unwritten rules?

Even worse, is that fist-shaking being directed at one of MLB’s brightest stars, a young sensation (21 years old!) that the sport should be embracing and promoting to fans and media at every available chance?

On Monday night against the Texas Rangers, San Diego Padres shortstop Fernando Tatis Jr. hit two home runs, driving in seven runs in a 14-4 blowout. The two homers gave Tatis the MLB lead with 11, one more than Mike Trout. (He’s also two ahead of Mookie Betts, which could inspire an entirely different piece about MLB’s greatest superstars all playing in Southern California.)

However, that second one caused some hard feelings in the opposing dugout. With the bases loaded in the eighth inning, Tatis was ahead of Rangers pitcher Juan Nicasio with a three balls, no strikes count. The next pitch was almost certainly going to be a strike, probably right down the middle, to avoid walking Tatis and allowing another run. What better time for Tatis to swing away?

But the Padres had a 10-3 lead at the time, a margin that was probably insurmountable that late in the game. So conventional baseball wisdom, or unwritten rules, say that Tatis swinging away for a home run was akin to running up the score, to rubbing it in to make sure that stain can’t come out.

Yet when Nicasio left a fastball out over the plate, the kind of pitch which allows a batter to extend his arms and get a really good swing, Tatis pounced on it. Boom. Grand slam. Four more runs scored.

It was a beautiful piece of hitting from Tatis. He did what a batter is supposed to do with an outside pitch, hitting it to the opposite field. But Tatis hit it so well and is so powerful that the ball went four rows deep over the right-field wall.

Tatis was just playing baseball, which is what you’d expect from a player while the game hasn’t yet concluded.

According to Rangers manager Chris Woodward, however, Tatis apparently should’ve stopped playing because his team had a seven-run lead and the game was presumably decided.

"I didn't like it, personally." Chris Woodward spoke on the swung on 3-0 count grand slam by Fernando Tatis Jr. in tonight's @FrontierCorp manager interview.#TogetherWe pic.twitter.com/3Zz9dRWMDW

“There’s a lot of unwritten rules that are constantly being challenged in today’s game,” Woodward said, via MLB.com. “I didn’t like it, personally. You’re up by seven in the eighth inning; it’s typically not a good time to swing 3-0. It’s kind of the way we were all raised in the game.

“But, like I said, the norms are being challenged on a daily basis, so — just because I don’t like it doesn’t mean it’s not right.”

This, frankly, is horseshit. (Pardon the language, but hey, cursing can be heard throughout baseball these days.)

This is my hill. I will die on it.

3-0 swings should be a regular part of baseball, no matter the score. @ me all you want. The ONLY thing wrong is that it might get your teammate hit because the opposing pitcher had his feelings hurt. So is the wrong in the act or retribution?

OK, Woodward and the Rangers probably just wanted the game to end and move ahead to the next one on the schedule. But the game is still being played. Nicasio should still be trying to get Tatis out. And if Nicasio throws a pitch that Tatis can hit for a home run, the batter should swing away.

Was Tatis padding his stats? Maybe, but when he gets a pitch he can hit, he’s trained to swing at it. This isn’t football, where an offense with a big lead is throwing the ball deep down the field, rather than run out the clock. Or basketball, in which a team continues to shoot three-pointers despite leading by a big margin. Those games both allow teams to ease up. Not to mention that the clock will eventually run out.

Baseball doesn’t have a clock. Even with a seven-run lead, it’s possible that the Rangers could have rallied to tie the score and maybe win. Improbable? OK, sure. But still possible. So the Padres kept playing. And if the Rangers just wanted the game to end, get those San Diego batters out.

So you take a pitch…now you're 3-1. Then the pitcher comes back with a great setup pitch…3-2. Now you're ready to groundout into a double play. Everyone should hit 3-0. Grand Slams are a huge stat. @tatis_jr https://t.co/4D3ilsD9Sh

Judging from the sentiment on social media — and notably from current and former MLB players — this stance isn’t exactly a bold one. It’s 2020.

Fernando Tatis keep playing hard and playing great, it’s a pleasure to watch you play, love your success and the Padres rise to be a winner. Keep leading the way. It ain’t easy to hit Hrs. Keep bringing energy you have to the game, we need players like you. An All Star

3-0 counts rule 😒😒 you just have to pitch better if you don’t want that to happen I never see that rule and I take my self as an example because I’m the king🤴🏽🤴🏽of 3-0 counts 🤷🏻‍♂️🤷🏻‍♂️ https://t.co/TkMDDOCIkX

Maybe you noticed that the current player tweets embedded above all came from pitchers. They don’t have a problem with what Tatis did because it was an honest result. Competitive athletes don’t want to be given anything. No, they don’t want to be humiliated or embarrassed either. But if they throw a bad pitch and a hitter launches it out of the ballpark, that’s baseball.

Related: Apparently bunting against a pitcher throwing a one-hitter is against baseball’s unwritten rules

Times have changed. The consensus in baseball has changed. Grumps like Woodward should adjust. Players want to play. Even MLB apparently agrees. Remember the game’s “Let the kids play” promotional tagline last season? Tatis is one of the best “kids” in baseball right now and the sport should celebrate any and every spectacular moment he creates.

Woodward was arguably protecting his players by criticizing Tatis after the game. But maybe he should poll the players in his own clubhouse. They’re probably OK with it. So is Major League Baseball, apparently.