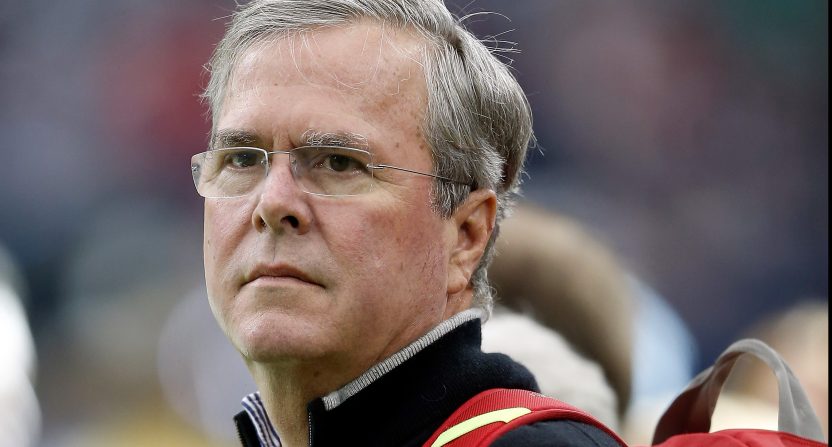 Hey, remember back when it sounded like the Jeb Bush/Derek Jeter consortium buying the Marlins from Jeffrey Loria was basically a done deal? It was all of last week.

Turns out that deal might not be quite so done, after all. Jeb did indeed have what’s been termed a handshake agreement to buy the team, but as of now, the financial details haven’t been locked down, which has opened the door for another bidder to attempt a late-game steal. As it happens, this other bidder also comes from a major Republican family.

Here’s the Miami Herald with details:

MLB is in the process of vetting numerous investors in both groups and a decision is expected shortly, the source said. The Marlins will make the decision on the new owner but any transaction must be approved by MLB.

…The Marlins fully expected that Bush would be able to close the deal.

But Bush, who submitted a list of investors to MLB officials during a meeting Monday, has neither signed a purchase agreement nor been able to definitively prove that he has the money to fund the deal. The review of his submitted list of investors is ongoing.

Because Bush has not signed any agreement with the Marlins, and was given no exclusive negotiating window with Loria, that has left an opening for Romney, whose latest bid is slightly higher than Bush’s but less than $1.4 billion, the source said.

Jeb Bush not being able to close the deal at this point would very much be in character for him, of course. Especially considering he’s already been acting as though he is the owner, including announcing that Jeter would be running the baseball ops department. But at this point, news that MLB is considering another bid, and one that’s slightly higher, cannot be great news for the Bush group.

That said, Loria does have some say in the matter, and it’d be fairly surprising if Bush cannot produce the investors needed to push the deal through the door. MLB and other owners are also likely going to prefer that Jeter be on board; that’s the main calling card for Jeb, despite the presence of Tom Glavine as part of Tagg Romney’s ownership group. (Tom Glavine was great, but the q-score isn’t really close.)

There’s really no downside, at this point. Either Jeb Bush buys the team from Loria, pushing Loria out of baseball and installing Derek Jeter as head of baseball operations (which has all kinds of comedy potential), or Jeb Bush gets this deal yanked out from under him.

The last time that happened wasn’t nearly as easy to laugh at.