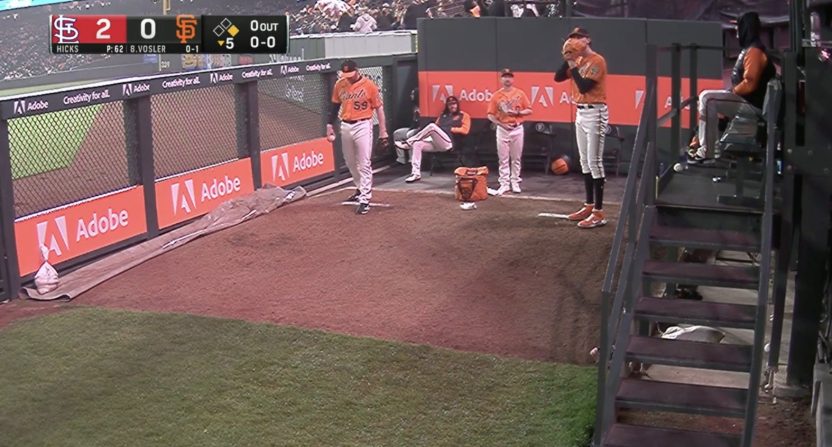 At 6’11”, Hjelle is *unofficially* at least tied for the tallest player in MLB history. Former big-league pitcher Jon Rauch was also 6’11”.

However, Hjelle “insists” that he’s 6’11.5″, according to The Athletic’s Andrew Baggarly.

Here comes Sean Hjelle for his debut. He's unofficially the tallest player to ever appear in the major leagues. (Jon Rauch was 6-foot-11; Hjelle insists he's 6-11 1/2.)

And Baggarly wrote more about that in an excellent feature piece on Hjelle in 2018. The Giants measured Hjelle at 6’11.5″ in June 2018:

Yes, even taller than the current record holder, journeyman reliever Jon Rauch, who was a towering, 6-11 presence on the mound.

The Giants measured Hjelle’s height and weight as part of his physical in June at the club’s minor league complex in Arizona. The draft database listed him as 6-11. He measured in at 6-11 ½. He swears he stood flat-footed.

“Got ‘em by a half an inch,” said Hjelle, smiling. “Yeah, 83 1/2 inches. It’s not how I dreamed of getting into Cooperstown. It’d be cool. But being a major league pitcher, that would be the dream come true.”

As for the MLB debut, it went quite well.

Hjelle, 25, threw one inning — on just 11 pitches — and didn’t allow a baserunner. He also struck out a batter. It was a key situation in the game too, tied 2-2 in the seventh.

The mustached right-hander has been a starting pitcher in the minors and had a 4.37 ERA over five starts for Triple-A Sacramento this season. He played college baseball at Kentucky.