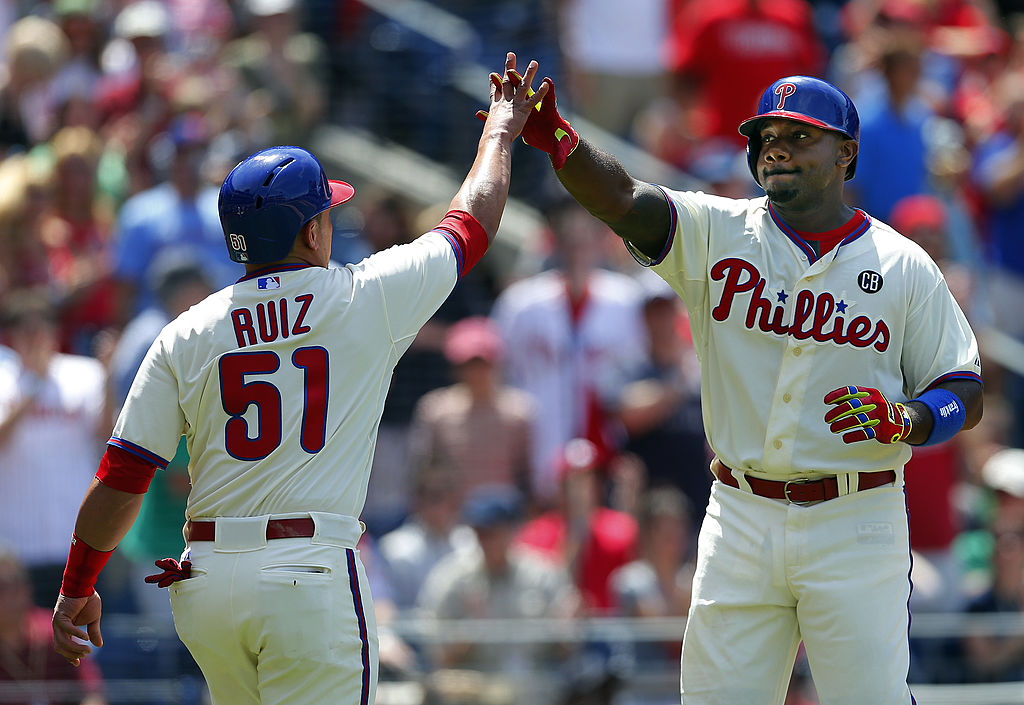 Over the past few seasons in Major League Baseball, some teams seem to be intentionally losing to better their draft position.  The NBA and NHL strategy of tanking has come to baseball, and like every time something new comes to the game, the old guard gets up in arms and starts yelling loudly about trying to fix the issue that isn’t an issue.

And tanking, while controversial, isn’t really a major issue that the league should concern itself with. Why not? Simple – it hasn’t exactly worked so far.

“But Joe!,” you say. “The Astros and Cubs tanked the bejeezus out of the last few years, and they both made the playoffs last year!”

That’s true. However, you can hardly credit “tanking” for the success of both of those teams. In fact, despite Houston having the top overall pick in the MLB Draft for three straight years, only one of those players contributed to the Astros’ success in 2015 – shortstop Carlos Correa. He’ll also be the only #1 overall pick to contribute to the team’s success in the foreseeable future, considering 2013 #1 pick Mark Appel was dealt to the Phillies this offseason as part of the Ken Giles trade and 2014 #1 overall pick Brady Aiken is a member of the Indians organization after famously failing to sign with the Astros after being drafted because of elbow issues that eventually led to Tommy John surgery.

The Cubs’ path to success also had less to do with tanking and more to do with savvy trading. Drafting Kris Bryant and Kyle Schwarber in the top five in back to back years obviously helped Chicago succeed in 2015, but 2011 and 2012 top ten picks Javier Baez and Albert Almora still haven’t been able to crack the major league lineup on a regular basis. Five of Chicago’s eight primary offensive starters on the 2015 team were drafted by other organizations (with Starlin Castro, Bryant, and Jorge Soler as the exceptions), and the entire starting rotation came over from other organizations.

Building an organization poised to contend in the long-term isn’t just about losing a lot and picking high in the draft – it’s about turning current assets into future assets. That’s what Chicago did when they traded two months of Scott Feldman for 2015 NL Cy Young winner Jake Arrieta and shutdown reliever Pedro Strop. That’s what they did by flipping Jason Hammel and Jeff Samardzija to the A’s for Addison Russell. The Cubs also acquired players that were seemingly out of favor with their organizations, most notably Anthony Rizzo (for Andrew Cashner) and Miguel Montero (in essentially a salary dump by the Diamondbacks).

In 2010, the Cubs had the fourth-highest payroll in baseball, featured just two offensive regulars under the age of 30, and lost 87 games. In 2015, they had only two offensive regulars *over* the age of 30, the eleventh-highest payroll in baseball, and won 97 games. In five years, the organization has drastically reshaped their fortunes – and there are people out there trying to tell you that the Cubs were tanking, and tanking is bad for the game.

Houston’s path to success is also less about “tanking” and more about simply being savvy. 2010 was the year Houston began their tear-down, trading Lance Berkman and Roy Oswalt at the trade deadline. Over the next few seasons, the Astros dumped nearly every player of value left on their team, including Michael Bourn and Hunter Pence. But the team’s pre-teardown strategy simply wasn’t working – after winning the NL pennant in 2005, Houston finished above .500 just twice from 2006 to 2010 and never went back to the playoffs. They were stuck in mediocrity in the NL Central, unable to break out of the muck in the middle of the division. And if there’s one place a sports franchise doesn’t want to be in, it’s that middle of the road, one foot in, one foot out place in the standings. A perennial 75-83 win MLB team isn’t one that fans can get behind.

So the Astros gutted their roster, took their payroll from the top half of baseball to the bottom five, and embarked upon a youth movement. And lo and behold…it worked! Houston made the playoffs in 2015 for the first time since that 2005 World Series run. Their 86 wins was the franchise’s most since 2008. Their attendance even hit 2.1 million, their highest since 2010 – the season where the slashing and burning really began.

And while a top pick in Correa was prominently involved in the team’s success, like Bryant and Schwarber were with the Cubs’ success, the Astros weren’t built on high draft picks. Jason Castro and George Springer were both first rounders, but were taken tenth and 11th overall, respectively. Houston traded prospects *for* DH Evan Gattis and outfielder Carlos Gomez. Colby Rasmus was a free agent signing, as was Scott Feldman. AL Cy Young winner Dallas Keuchel was drafted by the organization, but not in the top ten or even the first round – he was taken 221st overall in 2009. Sometimes it’s better to be lucky than good.

Then, there are the reigning World Champion Kansas City Royals. The Royals were a trainwreck for years, missing the playoffs in every season from 1986 to 2013 before winning back-to-back AL pennants in 2014 and 2015. Before finishing 86-76 in 2013, the Royals finished above .500 just once (2003) in the previous 18 seasons. They had top ten picks in all but two years from 1997 to 2013, and in many of those MLB Drafts, they had multiple first round picks. It didn’t matter how bad they were, the organization simply couldn’t put together a winning team through the MLB Draft.

A quartet of those first rounders contributed to the team’s success in 2013 – Eric Hosmer, Mike Moustakas, Alex Gordon, and Billy Butler were all drafted and developed by the Royals. Butler left the team as a free agent following the 2014 season, but the other three were part of both AL champion teams. But many of the other key components to the Royals’ success were acquired in trades – the team traded prospects for Wade Davis and James Shields, and traded former first round pick and AL Cy Young winner Zack Greinke for a package that included two key contributors to the team’s past three winning seasons, Lorenzo Cain and Alcides Escobar.

Throw in a pair of international signings that didn’t get huge bonuses in Salvador Perez and Yordano Ventura, and that’s how the Royals put together a World Championship team – and you can’t credit “tanking” for that success. They were awful for years, whiffed on high draft picks for years, and a perfect storm of talent, luck, and maturation came together at the same time.

That leads to the three teams under the most fire for tanking in 2016 – the Braves, Brewers, and Phillies. These three teams all lost 90+ games in 2015, and will pick third, fifth, and first, respectively, in June’s MLB Draft. Atlanta will also pick 40th, 44th, and 80th, while the Brewers pick 46th, 75th, and 82nd and the Phillies pick 42nd and 78th. The three organizations have stocked up draft picks, but also have solidified their farm systems in recent months by trading major league assets. Atlanta has dumped nearly every productive major leaguer on their roster aside from Freddie Freeman and Julio Teheran, while Milwaukee has only kept Ryan Braun and Jonathan Lucroy (for now), and the Phillies have gone scorched earth, only keeping highly-paid veterans Ryan Howard and Carlos Ruiz to go along with a young roster.

Maybe the strategies these teams are implementing won’t work – but if they don’t, what’s the plan next, spend money on free agents and hope to contend? That’s worked out so well for teams like the White Sox in recent years. Even if the Braves, Brewers, and Phillies don’t turn into juggernauts, they’ve all successfully turned their rosters over, making their teams younger and cheaper in the process. Remember – the Braves lost 83 games in 2014 with Jason Heyward and Justin Upton in their outfield. The Brewers couldn’t win more than 83 games six out of seven seasons from 2009 to 2015 despite and having an in his prime Braun in the heart of their lineup and Prince Fielder for the first half of that span.. The Phillies have continued to see their record and standing in the NL East creep backwards every year since winning 102 games in 2011.

As for enforcing a policy against tanking, consider this: There’s an MLB team that has finished under .500 in each of the last five seasons, and has traded at least one prominent player at the trade deadline in three of those five seasons. They’ve picked in the top ten of the last four MLB Drafts, and will have another top ten pick this June. Their payroll hasn’t been in the top half of baseball since the 2011 season. Yet, nobody accuses the Colorado Rockies of tanking – they’re just a poorly run franchise mired in mediocrity.

If that’s the alternative to “tanking”, give me 100 losses and no hope this season in exchange for a bright future in two years. Hell, what about the Marlins? They’re not “tanking” either, yet haven’t finished above .500 since 2009, have spent money for exactly one season in the last decade, and trade players at an alarming degree. That’s better than gutting a franchise with an actual plan in place?

There are no sure things in the MLB Draft, which is why simply tanking for a better draft pick (and the corresponding pool money that goes with it) isn’t a guaranteed path to success. Hell, the two biggest sure things in the Draft over the last decade were Stephen Strasburg and Bryce Harper, and the Washington Nationals were bad enough to luck into the top pick in both of those drafts. They’ve won a total of three playoff games in the decade the team has been in DC. It’s not about one player in baseball – let’s not pretend that tanking guarantees success, and that the MLB Draft is how all of the teams that “tanked” in recent years turned themselves into contenders.