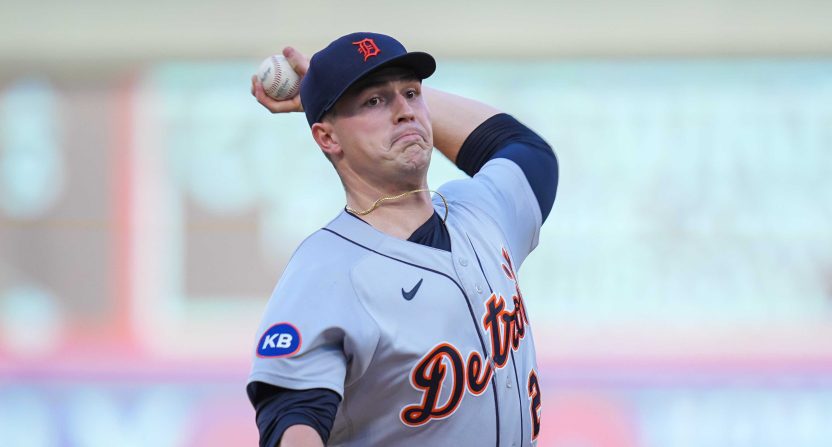 There’s never a good time for a player to suffer an injury. But on Monday, Detroit Tigers pitcher Tarik Skubal got hurt at the absolute worst time.

With the trade deadline less than 24 hours away, fans are on high alert for potential trades. So, when a player on a non-contending team is removed from the game at a seemingly random time, speculation abounds. Is that guy on the move? That was the case with Skubal in Monday’s start against the Minnesota Twins. As it turns out, though, he was not pulled because of a trade. In fact, he was pulled for something that could prevent a trade.

Skubal was solid against the Twins. He pitched five shutout innings, surrendering only three hits and two walks with four strikeouts. So, when he was pulled after only 77 pitches, he was on hug and handshake watch.

Anyone else a little nervy about Skubal leaving after 77 pitches and 5 scoreless innings? #G

But it wasn’t a trade. After he was taken out of the game, the Tigers announced that Skubal, a left-handed pitcher, was removed from the game with fatigue in his left arm.

Not only was Skubal not traded on Monday, but the injury all but eliminates him as a viable trade option ahead of Tuesday’s deadline.

It's difficult to envision how he could be traded by 6 pm ET tomorrow.

This pretty much eliminates Skubal from the trade market. https://t.co/2dxOCGu8Bt

A Skubal trade could have been good for the Tigers and a potential trade partner.

Following Monday’s start, Skubal had a 3.52 ERA, 1.156 WHIP and 117 strikeouts in 117.2 innings pitched. There is not a contending team that shouldn’t want him on the roster.

This is especially true since Skubal is not a rental. Far from it. He’s only 25 and has another year of team control and three years of arbitration before hitting free agency. So, even if a team traded for Skubal and missed the playoffs in 2022, there would still be several opportunites for the move to pay dividends.

It’s also not good for the Tigers.

Obviously, it’s never good to see an injury to a player. But beyond that, since Skubal is so good now and is a long-term option for teams, he could potentially fetch a great deal on the trade market. He may not be as good as someone like Carlos Rodón in 2022. But the long-term appeal of Skubal vastly exceeds Rodon — who’s likely to be a free agent after the 2022 season.

Now, of course, Skubal’s future prospects also apply to the Tigers. They may be out of contention this year. But it’s not out of the realm of possibility to think they they’ll be contending sometime in the next four years. Still, trading Skubal would have given Detroit a chance to further restock its system with prospects and other young talent — something the Tigers can seriously use.

Maybe Detroit wasn’t going to get enough of an offer to trade Skubal anyway. But now, any offer that does come the Tigers way will almost certainly be less than it was before Monday.