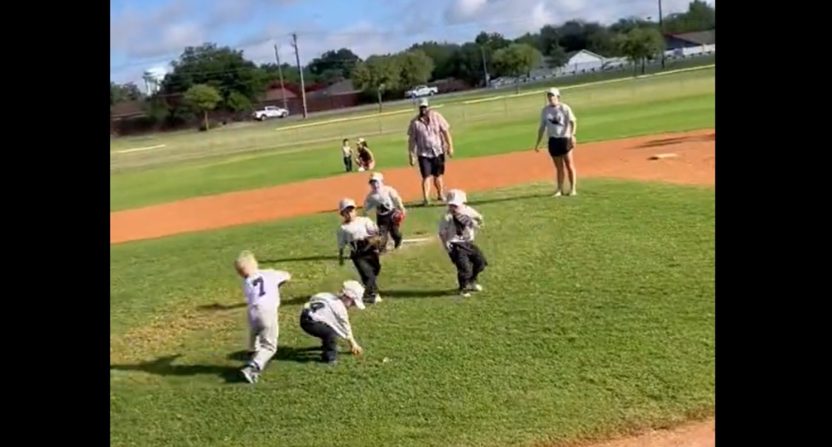 While Major League Baseball attempts to push back on the notion that their sport is too slow and boring, perhaps the answer lies with tee ball.

A recent viral Little League video featured a bizarre tee ball-MMA mashup as the young batter drove a grounder up the middle and proceeded to charge the mound, mauling the pitcher in an effort to keep him from making a play. For those who remember the early 2000s video game MLB Slugfest, watching a baserunner brawl out on the defense isn’t a new concept. But no one would have ever predicted tee ball could resemble a video game with juiced up pro athletes.

In another viral Little League video earlier this year, opposing players embraced each other after a batter was hit by a pitch and realized the pitcher was emotionally shaken by the incident. These tee ballers didn’t quite display the same kind of sportsmanship.

The pitcher was quick to the ball as he attempted to make a play off the mound. Even quicker, however, was the batter, who realized he might not be able to beat the throw to first, but he could at least disrupt the pitcher from making a play. Although he successfully broke up the play by mauling the pitcher, the batter should be called out for leaving the basepath, but his win at all costs effort will not be overlooked. Similarly, the pitcher’s attempt at immediately getting back up to find the ball should garner plenty of respect in the clubhouse. Hopefully, no one was injured.

MLB is constantly using the minor leagues as a testing ground for implementing new rules to help modernize the sport. Recently, MLB announced several rule changes were on the way in 2023, including bigger bases, a pitch timer and shift limits. But if they really want to bring more eyes to the sport, perhaps they should pay attention to what tee ball is doing.