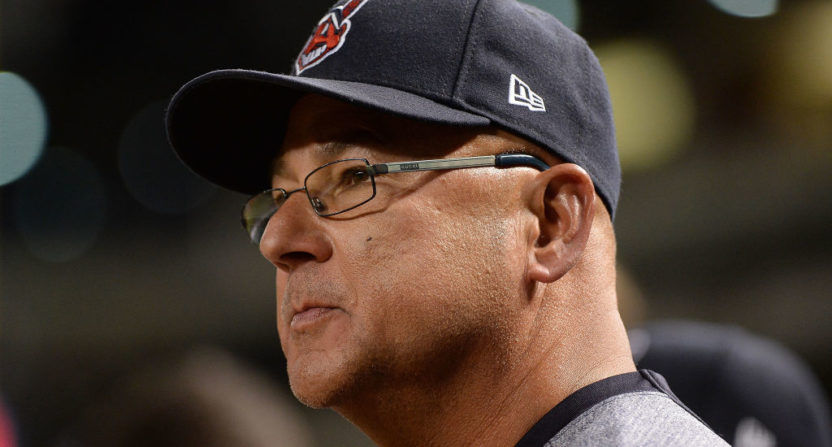 Whenever you hear someone has had a sudden medical procedure, it’s never truly good news, But when it’s successful, that certainly adds a positive spin to things. According to a statement released by the Cleveland Indians, manager Terry Francona underwent a procedure to correct an irregular heartbeat at the Cleveland Clinic Thursday afternoon.

If you want to know more about a catheter ablation procedure and what it involves, here’s more information, courtesy of Johns Hopkins (via Fox Sports’ Ken Rosenthal).

The scariest news, perhaps, is that Francona has been suffering from symptoms for a while now, as detailed by Zach Meisel on Cleveland.com:

Francona left the Indians’ dugout during the team’s game against the Dodgers at Progressive Field on June 13. He underwent testing at Cleveland Clinic and Antonetti drove him back to his downtown apartment in the middle of the night. Francona returned the next evening to his brown leather seat at the end of the dugout.

Less than two weeks later, Francona experienced the same symptoms, which required another trek to the hospital. Antonetti forced him to take a day to rest after that occurrence. Francona also missed a game in Washington, D.C., last August after he experienced chest pains.

“As a friend, you’re always concerned,” Antonetti said last week. “Especially someone like Tito, who has an exceedingly high pain tolerance — for him to leave a game raises a flag.”

Francona missed a game for chest pains last August in Washington, and last June was forced to leave a game early after suffering from a rapid heart rate and light-headedness, which were ruled as symptoms of dehydration.

As for when he’ll be back in the dugout, it could be sooner than one would normally expect someone to return to work following a heart procedure:

The Indians’ coaching staff and five players are scheduled to fly south following the club’s game Sunday night against Detroit. They will return to Cleveland after the (All Star Game) and then head to the west coast next Thursday for a weeklong road swing through San Francisco and Oakland. Francona is expected to rejoin the club in the Bay Area.

According to Rosenthal (and later corroborated by the Plain Dealer‘s Paul Hoynes), Indians bench coach Brad Mills will replace Francona as the American League’s manager and assisted by Cleveland’s coaching staff, along with Tampa Bay Rays manager, whom Francona named to his staff.

Beyond the MLB All-Star Game and the Indians, however, hopefully Francona makes a full and quick recovery.