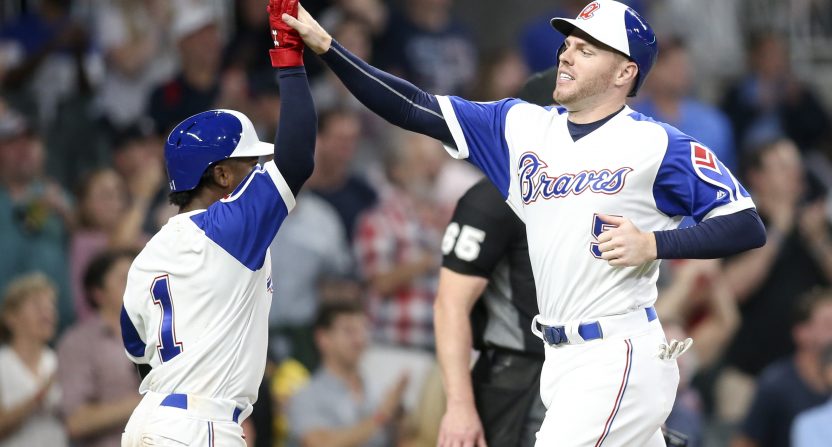 The first half of the 2018 MLB season is pretty much in the books, and the playoff picture is looking…well, four of the American League’s five playoff teams from last year are in Postseason position once again, while three of last year’s NL playoff teams are poised to return in a very tight upper tier of the league.

Plenty of teams have put together campaigns that have exceeded expectations, while others have simply failed to live up to the hype (even as minimal as some of that hype may have been) in 2018. Here are the three most surprising and three most disappointing teams so far during the 2018 season.

Surprising: Oakland Athletics. Somehow, the A’s are six games above .500, sitting in third place in the AL West (and unfortunately for them, seven games back of the Mariners for the second Wild Card slot in the AL). Oakland’s offense has been impressive so far, with Jed Lowrie launching 13 homers (one shy of his total last year in 73 fewer games), Matt Chapman breaking out in a big way, and Matt Olson following up a strong rookie campaign with 17 homers already this year.

There have been fewer highlights on the mound, though Blake Treinen has been lights out in the ninth inning and could fetch a strong return at the trade deadline, and the duo of Trevor Cahill (when healthy) and Sean Maenaea have anchored a rotation that has been lacking consistency this season.

In the second half, I don’t think the A’s will go into full-blown tank mode. They only have five free agents after the season, and the only one that could provide them with a strong return is Lowrie. I wouldn’t be surprised if Oakland kept things low key next month and over the rest of the second half of the season, and eventually ended up finishing above .500.

Disappointing: Kansas City Royals. I don’t think anyone expected the Royals to be *good*, but did anyone expect them to be this bad? Kansas City is 30 games under .500 and in dead last in the AL Central, behind even the perpetually rebuilding White Sox. They don’t have one offensive player at 2.0 fWAR for the season. Their best hitter has been Jorge Soler, rocking a cool 125 wRC+. None of their pitchers have even hit 1.0 fWAR on the year, and their only starter showing any sign of promise is Brad Keller, who has made just five starts after starting the year in the bullpen.

It’s going to be a long second half for the Royals. Danny Duffy, Alex Gordon, and Ian Kennedy are all having awful years, and are all owed tens of millions next season. Mike Moustakas is having a decent enough year, but has less trade value than he did a year ago. Sal Perez has been woeful at the plate (11 homers not withstanding), and his contract is no longer as incredibly team-friendly as it was.

Jeez. This might only get worse before it gets better, especially with Kelvin Herrera already out the door.

Surprising: Atlanta Braves. Nearly everything that could go right for the first place Braves has gone right. Freddie Freeman is a legitimate MVP candidate in the National League. Nick Markakis is a lock for his first career All-Star Team. Ozzie Albies has built on his 2017 debut in encouraging fashion. Ronald Acuna is no longer being held prisoner in the minors. The catching duo of Tyler Flowers and Kurt Suzuki remains the best in baseball. Hell, the only downsides on offense for the Braves are the lack of a long-term third baseman (though Johan Camargo has performed impressively since starting the game on the DL), Dansby Swanson’s mediocre year after a hot start, and Ender Inciarte’s unexpected struggles.

Pitching-wise, both Mike Foltynewicz and Sean Newcomb have had breakout seasons for the Braves, and bullpen trio Shane Carle, AJ Minter, and Dan Winkler have pitched quite well. However, the back-end of their rotation (especially veterans Brandon McCarthy and Julio Teheran) has failed to live up to expectations, and the middle innings relievers (especially Sam Freeman and Peter Moylan) have struggled.

Atlanta’s being chased in the division by a strong, young Phillies team, and a Nationals team that simply needs to get healthy to make some noise. The Braves will need better performances from the bit players on their roster to continue their success into the second half, but ongoing success isn’t a false hope for Braves fans going forward.

Disappointing: Colorado Rockies. Geez, what happened to these guys? Well, in the case of nearly every player on their roster except Nolan Arenado, they came back to earth. Arenado is playing out of his mind again (.308/.393/.584 with 19 dingers), but Charlie Blackmon’s batting average has dropped to its lowest mark since 2011, Ian Desmond has been terrible for the third time in four seasons, and the bullpen outside of Adam Ottavino has stunk.

One real weird note for the Rockies – their rotation hasn’t missed a turn all season. Tyler Anderson, Chad Bettis, Kyle Freeland, Jon Gray, and German Marquez have started all 81 games for them this year. Sure, they’ve all been unlucky (especially Gray, who has a 5.77 ERA to go along with a  3.07 FIP), but that type of health and consistency could help one of the 2017 NL Wild Card teams in the second half. They’re only three games under .500, but the Dodgers and Giants are both getting hot in the NL West, and the Rockies need to turn it on if they want to return to the playoffs again in 2018.

Surprising: Seattle Mariners. Holy shit, the Seattle Mariners have a better record than every team in the National League. That’s awesome, but it’s mitigated by the fact that three other AL teams have a better record than the Mariners, including the Houston Astros, who have a 3.5 game lead in the AL West on Seattle. Imagine being the Mariners, having such a great season, making the playoffs for the first time since 2001…and having to travel to either Boston or New York for a winner take all game. Hard luck.

How’s Seattle done it, even with Robinson Cano suspended and Felix Hernandez pitching terribly? Nelson Cruz has 21 dingers in just 67 games. Mitch Haniger is hitting .268/.352/.487, and Jean Segura (acquired in the same trade as Haniger, mind you) is slashing .335/.364/.479. That’s a hell of a core for your lineup.

The Mariners also have a new ace by the name of James Paxton (3.65 ERA, 134 strikeouts in 103 2/3 innings, and a no-hitter) and a strong bullpen led by lights out closer Edwin Diaz (30 saves, 2.57 ERA, and 68 strikeouts in 42 innings). A bunch of things have gone wrong for Seattle in addition to Cano’s suspension and Hernandez’s struggles, including Kyle Seager scuffling at the plate, Dee Gordon hitting like…well, Dee Gordon, and Juan Nicasio striking out 40, walking three, and allowing 22 runs in 32 innings, which just doesn’t seem to compute. The Mariners are in a tough situation, because competing with either of the three behemoths in the American League is going to be tough, but they’re close enough that one potentially dominant starter (Cole Hamels?) could push them over the top and into a more advantageous position.

Disappointing: Washington Nationals. We close with the team that has dominated the NL East for the last few seasons, yet hasn’t won a playoff series. In Bryce Harper’s final year before hitting free agency, he’s struggled (by his lofty standards, at least). Ryan Zimmerman’s 2017 rebound season is nothing but a memory. Adam Eaton has been hurt (again) and has played just 23 games. Anthony Rendon has been hurt (again) and has played 59 games. Matt Wieters has stunk (again). Stephen Strasburg is (again) hurt, and Jeremy Hellickson has joined him on the DL.

And here are your 2018 Nationals, led by a scuffling Harper, a dominant Max Scherzer, a suddenly plucky bullpen with Sean Doolittle in the ninth inning, and a quite good but non-transcendent Trea Turner. They’ve fallen back to third in the NL East behind the Braves and Phillies, and are even out of the Wild Card race as well. Their playoff odds (according to Baseball Prospectus) are falling. The first half as been a complete disaster, but that might be the best thing for the Nationals – maybe they need to gut out a division race in the second half to boost their intensity for the playoffs.