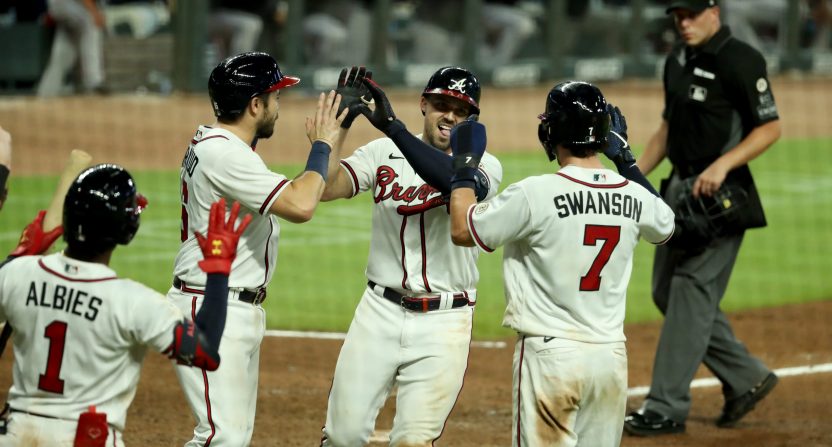 The Atlanta Braves set a new franchise and National League record with 29 runs scored in a 29-9 beatdown of the Miami Marlins, a night after being shut out by Miami rookie Sixto Sanchez.

Every player recorded a hit for Atlanta, and every starter also scored a run and drove in a run for the Braves except for Dansby Swanson, who failed to drive anyone in. Swanson, Ronald Acuna Jr, Freddie Freeman, Adam Duvall, and Ozzie Albies (in his first game back off the IL) had three hits apiece and four Braves scored at least four runs each (Acuna, Swanson, Austin Riley, and Duvall, the latter three of which crossed the plate five times). Four Braves had at least three RBI each: Acuna, Travis d’Arnaud, Freeman (six), and Duvall (nine).

Duvall was the star of the show for the Braves, becoming the first player in franchise history to record two three-homer games (in a career, let alone in a season). His nine RBI night also ties the Braves’ single game record. If Duvall had come up one more time, he could have become the first player in MLB history to hit for the home run cycle, as he hit a two-run shot in the second, a three-run homer in the fifth, and a grand slam in the seventh. Needing just a solo homer for a home run cycle and any type of homer for a four-homer game, the Braves were only able to put one runner on the base and couldn’t bring him to the plate.

Atlanta’s seven homers fell one short of tying the franchise record, with Acuna, Albies, Freeman, and d’Arnaud joining Duvall in the barrage of Marlins pitching.

Acuna deserves a mention as well, because he also walked three times in addition to his three hits. Braves hitters walked a total of nine times on the evening, with Duvall and Riley each receiving two free passes.

Pitching-wise, things didn’t start well for the Braves. In his third start for Atlanta, Tommy Milone allowed eight runs and recorded ten outs. Grant Dayton got the win after 1 2/3 innings of scoreless relief after coming in for Milone, while Bryse Wilson got a save (!) for four innings of one run ball to finish the game out. He’s not the first player in baseball history to record a save in such a blowout – Wes Littleton of the Rangers also got a save in Texas’ 30-3 win over the Orioles.

On the other side of the coin, it’s easy to ignore the fact that the Marlins scored nine runs and still lost by *20* on the night. Jesus Aguilar went 2/5 with a couple of doubles, and rookie Jazz Chisholm hit his first MLB homer, but Miami’s bats went pretty quiet after Milone left the game. After cutting the Braves’ lead to 13-8 in the fourth, Miami “only” put six men on base in the game’s final five innings, scoring just once.

The less said about the Marlins’ pitching staff, the better. Each of Miami’s first four pitchers allowed at least as many runs as outs recorded. Starter Pablo Lopez was pulled in the second after recording five outs, and was charged with seven runs on the night. Jordan Yamamoto relieved him and was forced to absolutely wear it on the night, throwing 94 pitches over 2 2/3 innings while allowing 13 runs (only 12 earned!) on 11 hits, four of which were home runs. Alex Vesia was next, and his night lasted just four outs. He was tagged for five runs (four earned), while he also walked three. Josh Smith gave up four and got four Braves hitters out, and Ryne Stanek turned in the best performance of the night by holding the Braves scoreless in the eighth.

Overall on the night, the two teams combined for 38 runs, 36 hits, and two errors. Hitters struck out 16 times, walked 13 times, and went yard nine times. The three Braves pitchers threw 197 pitches, and Marlins hurlers heaved 240 pitches toward the plate (missing the strike zone with 99 of those pitches). The teams stranded 12 hitters between them, and combined to go 15/31 with runners in scoring position. The game time was a horrifying four hours and 14 minutes.

This game was not pretty to watch. The first three and a half innings took over two hours to play, and it was a pure slog to get through. But as it continued to roll along and it turned into a one-sided rout, this game turned from a farce into something more memorable and more historic. This matchup ended up encapsulating baseball in 2020: unwatchable at times, incredibly exciting at other moments, and filled with dead moments thanks to balls not being put into play. Ultimately, for better or worse, that’s what you’re getting with today’s game, and it’s tough to come up with one solitary fix that will rectify all of the game’s ails.