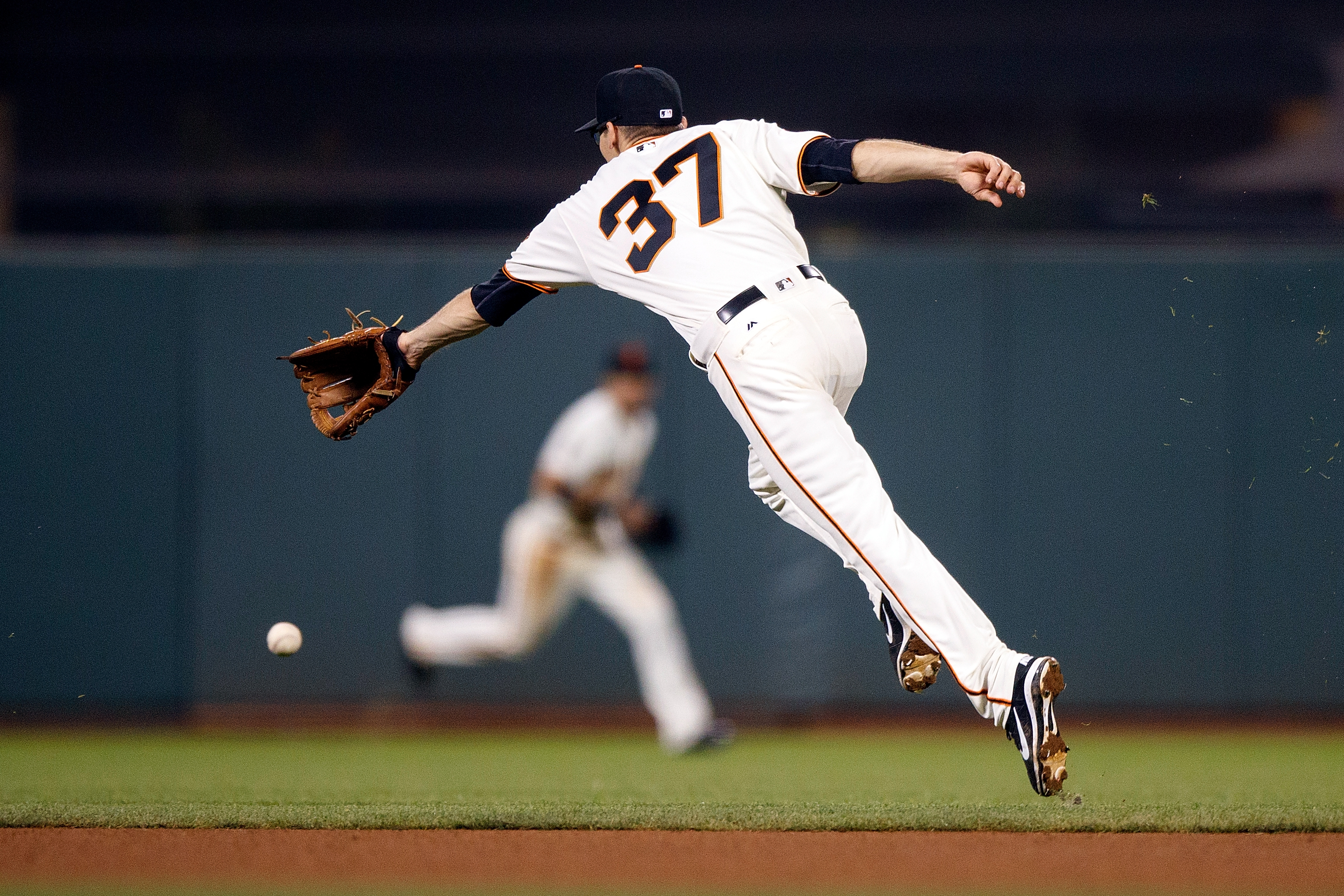 But seriously, are the Giants going to miss the playoffs?

The Giants swoon is a story that is probably not getting enough attention, likely because it combines two of our most overlooked sports commodities: a west coast team and baseball. (Other overlooked commodities include regular season college basketball, Ryan Moore as a Ryder Cup captain’s pick, and NFL prospects from Indiana University.) But they were rolling for a long time, even passing the Cubs in the standings after Chicago came back to the pack following a record start to the season. Their chance to keep the even-year magic going (World Series wins in 2010, 2012, and 2014, if you’ve forgotten) looked very good.

And then, they started playing terrible baseball. Most recently, the Giants blew a game to the lowly Padres last night, in excruciating fashion. Bruce Bochy played the platoon matchup in the 9th, bringing in a lefty with two outs, and it backfired most impressively:

SB Nation’s Grant Brisbee wrote a tremendous post-mortem, which is difficult to read even as a neutral fan:

“I have never hated a Giants team quite like this one. I would say the 2009 Giants were close, but now we have several of our very own Spilborghs moments for this season, so I’m leaning toward this one. I hate this team, yet they still might make the postseason, at which point they would have about a five- to 10-percent chance of winning the whole stupid thing again. Which would be absolutely hilarious. They’re officially the most painful team in franchise history now, at least as far as the ninth innings are concerned.

This is just all setting up the movie before the montage kicks in. Daniel Russo being the best around. Rocky Balboa training in the frozen Siberian tundra. Gorkys Hernandez beating out an infield hit in the ninth inning of Game 5. You can see it coming. Oh, yes, you can. It’s beautiful. It’s coming from a bright light. All you have to do is go into the light.

The 10th thing to remember is that we’re all going to die and you’ll probably be thinking of other, far more egregious mistakes and regrets right before it happens. You have a lot more to worry about than a silly old baseball game. We all do.”

Just how bad have the Giants been over the past two months? Well, here are a few snapshots from Fangraphs always-useful Playoff Odds, which feature the real-life standings as of a certain date, as well as the projected final standings, given remaining schedule and projected strength of team, along with the % chance a team will make the playoffs via a division win or via an appearance in the wild card game. (Got all that?)

For reference, at that point in the season, the Giants had the best record in baseball, a few games ahead of the Nationals and Cubs. Look at those playoff odds. 95% to make it to at least the wild card game, and 69% (nice) to win the division. Now, let’s take a look at that same snippit after last night’s games:

Yikes. The Dodgers have actually played slightly worse from July 15th through today than they did from the start of the season through July 15th, and they’ve still gained 9.5 games on the Giants. The Giants have gone 20-33 in their last 53 games. That’s astoundingly poor!

They’re now looking up at the Dodgers, and they’re teetering on the edge of missing the postseason altogether. Fangraphs still gives them the edge, and if the season ended today they’d be hosting New York for the play-in game.

Here’s the Fangraphs model as of today for the NL wild card:

The Giants didn’t receive any help last night, as the Cards and Mets beat the Cubs and Nats, respectively. It’s an interesting race, made more interesting when you consider the Cardinals are in San Francisco for four games starting Thursday. The Giants could give themselves some much needed breathing room, or they could dig themselves an insurmountable hole in the loss column.

If a Giants fan really wanted to dream big, they could look to the six remaining games against the Dodgers, including a three game set at home to close the season. (The last game of which will also be Vin Scully’s final broadcast.) But it’s tough to not keep going back to 20-33, which is a stunning turn of events; if it were the Yankees or Red Sox we’d likely be hearing about it daily. This was a really good team, and then suddenly it wasn’t.

Maybe they ran out of magic this year.

Or, as Grant notes, maybe they’ll squeak in and then end up running through the playoffs for another even-year championship.

-That right there is the newest Burger King item: Cheetos Chicken Fries. Good heavens, they look terrible. But heaven forbid you keep the greatest item in fast food history on the menu! I refer, of course, to the Rodeo Cheeseburger. (Yes, I know that technically the Rodeo Burger is on most Burger King value menus, but try ordering it with cheese. You won’t get cheese, but you will get the $.50 upcharge.)

-As mentioned above, but worth mentioning again, Vin Scully won’t call any Dodger playoff games, meaning his last broadcast will be October 2nd in San Francisco. Hopefully TBS picks up the broadcast if possible.

-A fun look at 30 years of Super Mario Bros.

-Urban Meyer evidently signed a contract with his family. Makes sense from the family’s perspective, considering Meyer’s history of abandoning them in favor of football powerhouses. (I’m joking, folks. Though when he left Florida and gave the whole spiel about time with his kids and health concerns and then went to Columbus after a year, it was pretty bad.)

-Jerry Jones applauds the Cowboys for not protesting the national anthem, because Jerry Jones unsurprisingly does not grasp the nuances at play. The ol’ Double-J isn’t much for nuance, as evidenced by his stadium.

-Speaking of anthem protests, Sean Keeley wonders if we are already losing sight of the message.

-Here’s a ridiculous brawl at a Texas apartment complex. Hopefully no one was seriously hurt, but my goodness, are young drunk men dumb. (Well, there are plenty of young drunk women that are dumb too, but that’s not what this video is about.)

-Tom Brady apparently just discovered the Red Zone channel this weekend while serving his suspension. That’s a very Tom Brady thing. (I mean obviously he’s occupied most Sundays, but still.) I’m excited for the “Tom Brady thinks we should all be checking out this Breaking Bad show he just found” headline.

-ICYMI, Kevin Harlan dropped the best play-by-play you’ll hear this season, and it was for an idiot on the field. Here it is. It’s glorious.

It’s almost impossible to choose, but my favorite part might be after the idiot was captured. There’s a brief pause, and then Harlan says, disgustedly, “That was the most exciting thing that happened tonight.”

-Unfortunately Kevin Harlan was stuck doing the radio call for that game. The television viewer, meanwhile, was stuck with Chris Berman. Good lord. It was probably his last MNF game, and he went out in a cloud of incompetence. Fitting, really. It also likely contributed to the record-low ratings.

-Another ICYMI, here’s an absolutely ridiculous youth rugby player that is essentially a human truck stick.

Credit to whichever kids were brave enough to try to bring that kid down.

–South Park is going to do a Colin Kaepernick episode in their upcoming season. Relatedly, South Park is still on the air. (Funny thing, though: it’s actually still big deal in Colorado. It’s appointment viewing for a lot of people. Had many coworkers discuss it constantly while I was there.)

-The NFL Color Rush jerseys are out, if you’re into Nike trying to Oregon-up your team’s unis.

One last bit of procrastination

Listen, these aren’t always complicated. Today, you were promised a parkour pig.

This is that pig: