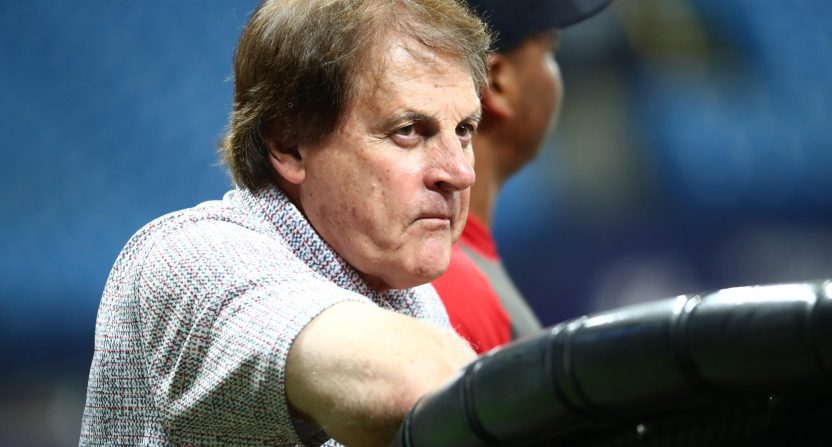 The Chicago White Sox announced their new manager two days after the end of the World Series. Their choice was 76-year old Tony La Russa, a Hall of Famer who retired after winning the 2011 World Series with the Cardinals.

Tony La Russa, a member of baseball’s Hall of Fame, the third-winningest manager in baseball history, a three-time World Series champion and a four-time winner of the Manager of the Year Award, has been named the new manager of the Chicago White Sox. pic.twitter.com/RKP24rleHP

La Russa replaces Rick Renteria, who was let go after helping the team to a playoff berth this season.

In a wholly expected development, ESPN’s Jeff Passan reports that some within the White Sox organization are already questioning the hire. It’s never a good sign when news like this is being leaked *minutes* after a hiring is announced!

The hiring of Tony La Russa has ruffled feathers in the White Sox organization. A number of employees have concerns about his ability to connect with younger players and how he will adapt to the field after being away 9 years.

This was a Jerry Reinsdorf decision. Simple as that.

I won’t run down La Russa’s credentials (the tweet from the White Sox does that job well enough), but there are plenty of questions about bringing him back into the dugout nearly a decade after he last managed. Of note, he has been somewhat critical about the role of analytics in the modern game and has also been outspoken about national anthem protests (five members of the White Sox took a knee on Opening Day) and the Fernando Tatis Jr 3-0 grand slam controversy.

La Russa will be forced to walk a tightrope in the White Sox clubhouse, showing a level of openness to analytics, social causes, and flashy play to satisfy the team’s front office and its players. With the White Sox having their core of Jose Abreu, Tim Anderson, Eloy Jimenez, and Luis Robert signed through at least 2022. Despite the job that GM Rick Hahn has done putting this team together, if La Russa isn’t able to immediately connect with the players and elevate them to another level, you have to wonder what the next step will be. Could owner Jerry Reinsdorf actually side with the new manager over the GM who put all the foundational pieces in place? If so, that could be a fatal step back for Chicago’s hopes of rebuilding their franchise, especially if La Russa wants members of that core jettisoned.

And on the other side of the coin, if the White Sox fail to live up to their expectations and La Russa is removed as manager, why in the hell was he hired in the first place?

The fact of that matter is that the White Sox need to win for the La Russa hire to be looked at positively. Because even if everything is copacetic between La Russa, the players, and the front office, but the team struggles on the field, we’ll have questions about just how long he’s going to stick around and when both sides will move on. There would be pressure on whoever the next White Sox manager is, but when that manager hasn’t been at the helm of a team in a decade and is in his mid-70s, there’s even more pressure on both him and the team’s front office.