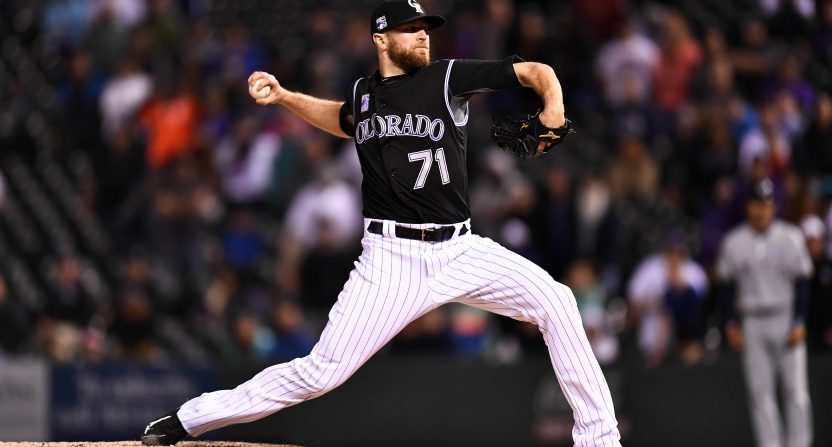 Over the winter, the Colorado Rockies signed Wade Davis to a three-year, $52 million deal, and signed Jake McGee and Bryan Shaw to three-year, $27 million deals. Add that up, and you have $106 million committed to three relief pitchers by Colorado general manager Jeff Bridich.

The Rockies play their home games at the arcade baseball park Coors Field, and it’s nearly impossible to convince a good starting pitcher to sign there (barring a large overpay, anyway). Additionally, starting pitchers frequently aren’t going deep into games at Coors, because they may throw 100 pitches through four innings while the opposition smacks the ball around the yard.

The altitude also makes certain pitches harder to have their effectiveness, with the curveball a pitch that is especially negatively impacted in the thin air. Now, a study from Baseball Prospectus did show that sliders perform more naturally at Coors. And the one thing that will always play: high-velocity fastballs. It’s particularly important to get whiffs at Coors as well; pop-ups frequently become homers, and the outfield dimensions are so large that bloopers become singles, singles become doubles, doubles become triples, etc.

So, the Rockies decided to try to build a super bullpen, hoping to unleash max-effort good relievers to get whiffs and help make up for the difficulty of finding starting pitching. The thinking is that you can basically turn a 9-inning game into a 6-inning game if you have a few top-notch relievers late.

But, um, it hasn’t worked. To put it nicely.

The Rockies spent $106 million on Wade Davis, Bryan Shaw, and Jake McGee over the offseason.

Wade Davis has a 5.09 ERA, 4.35 FIP, and six blown saves as the Rockies’ closer. On Thursday, Davis gave up two runs in the ninth to blow the Rockies’ 2-1 lead against the Cardinals in St. Louis.

And on Friday, the Rockies took a 3-2 lead in the ninth when the Milwaukee Brewers’ Eric Thames hit a walk-off three-run homer off Davis:

Down to your last out.

Davis — who turns 33 in September — saw a velocity drop with the Chicago Cubs last year and walked more batters than ever before (11.6%).

It’s only gotten worse with the Rockies; Davis’ average fastball velocity is below 94 mph for the first time since becoming a full-time reliever, and he’s now walking 12.5% of hitters (including two in the ninth inning Friday). His formerly excellent curveball also doesn’t appear to have the same bite. While it’s possible he pitches better than *this*, he doesn’t look anywhere near the guy that was an elite closer for the Kansas City Royals from 2012-16. It’s even worse when you consider that Davis is set to make $18 million in 2019 and $17 million in 2020, with a $15 million vesting option in 2021 (or a $1 million buyout).

Then there’s Bryan Shaw, known for one of baseball’s best cutters with the Cleveland Indians. Shaw, 30, had a 1.6 WAR according to FanGraphs (fWAR) in 2017, and was a rock-solid reliever for five seasons in Cleveland. He currently has a 6.91 ERA, 5.19 FIP, and -0.3 fWAR. Like Davis, Shaw is having serious command issues, with a career-worst 11.1% walk percentage this season. He’s also already allowed eight home runs, matching his career-worst in a season.

Yes, Coors Field has made things worse for all of these pitchers, but they’ve all been bad on the road as well.

The Colorado bullpen is 19th in fWAR, and really the only reason they’re even that high is because Adam Ottavino has been fantastic. Ottavino has a 1.35 ERA, 2.08 FIP, and 2.0 fWAR. The Rockies should put aside contracts and their original plans, and treat Ottavino as their top reliever. He should’ve just come out for a second inning of work on Friday night, for example, after throwing a scoreless eighth inning.

But the $106 million signings have been an absolute mess, and serve as a great example of why teams shouldn’t go overboard in buying relief pitching. Relievers are volatile; there are maybe a dozen relievers in baseball that you can basically count on being very good on an annual basis. Additionally, many quality relievers emerge from farm systems across the league each year if given the chance.

Now, it’s understandable that the Rockies felt they needed to try something different; they’re in a situation no other team in baseball can relate to with Coors Field. And they’re always going to have a more difficult time bringing in good starting pitchers to play there. But spending $106 million on aging relief pitching was still a very questionable use of resources, even if the pitchers went on to perform anywhere near expectations. And obviously it’s been anything but that, which makes things disastrous.

Despite the the horrible returns on the signings, the Rockies are still just 2.5 games back in the NL West and Wild Card races. It would be pretty ironic if the Rockies end up missing the playoffs due to the brutal performance of their three big signings.