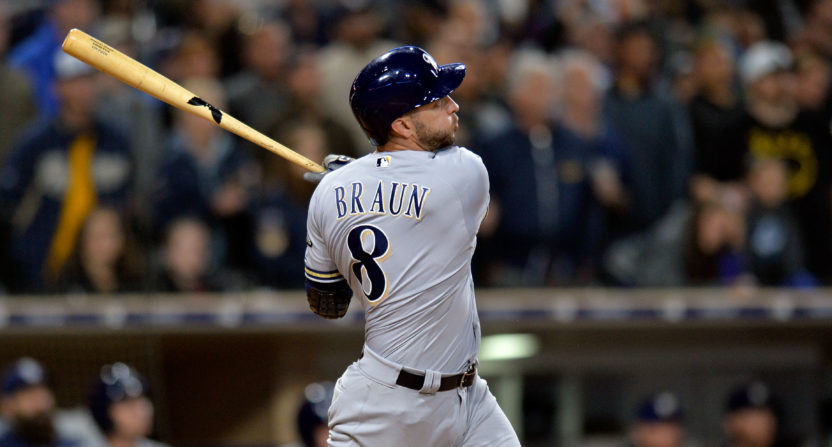 We’re only on the third day of the MLB season, but there could already be a trade in the works involving a couple of big names and (likely) contending teams.

Michael J. Duarte of NBC Los Angeles reports that the Los Angeles Dodgers and Milwaukee Brewers are discussing a trade that would send Ryan Braun to the Dodgers, and Matt Kemp and prospects to the Brewers.

I can confirm that the trade talks with the #Dodgers and #Brewers are for Matt Kemp and Ryan Braun as well as Dodger prospects. Right now, the deal is hung up one specific player the #Dodgers don't want to move.

They would be in this particular deal being discussed. https://t.co/xChzIpybrj

I'm afraid so. Chances are high, and all depends on who blinks first. #Dodgers or #Brewers https://t.co/ww8lRQGxPS

Duarte was told by one Twitter user that Brewers general manager David Stearns shot down the rumor, but Duarte seems confident in the information he’s getting.

Do you think he would admit to trade talks regarding his franchise player before they play a game? Has any GM? https://t.co/jq217rr9Aa

I trust my sources over a GM speaking to the media every day of the week https://t.co/X21OjvSQzh

The timing of this rumor is even more interesting after Braun saved the Brewers last night in San Diego, on this 0-2, 2-out homer in the ninth against Padres closer Brad Hand:

"Why you should always stay up to watch the end of the game" by Ryan Braun pic.twitter.com/htAIEiIFuQ

But it’s been known over the last couple of years that the Dodgers have interest in Braun, who’s still a very good hitter — as that home run showed — even at 34. The Steamer projections have the six-time All-Star putting together an .840 OPS this season, and he OPS’d over .900 as recently as .2016.

The Dodgers may also have more urgency to make such a move with Justin Turner — their best right-handed hitter — out for several weeks with a broken wrist, and we don’t know if Turner will return as the same elite hitter even when he’s cleared to play. Wrist injuries have been known to sap power. And through two games, the Dodgers have certainly missed Turner: they’ve been outscored 2-0 by Joe Panik.

So, the Dodgers targeting Braun does make sense, and the Brewers dealing Braun is certainly something that would be understandable as well. Milwaukee has a logjam in the outfield after the Christian Yelich and Lorenzo Cain acquisitions in the offseason, and this even led to Ryan Braun getting the Opening Day start at first base. He’d only played the outfield over the last 10 years. So you add all of that up, while also factoring in Braun’s high-dollar contract over the next few seasons, and it makes sense that the Brewers would look to unload Braun for something else that can help their team.

But Kemp, 33, wouldn’t be that solution. Yes, he’s lost over 40 pounds and had a terrific spring. But he’s still likely a worse hitter than Braun going forward, is likely a worse defender than Braun going forward (even with the weight loss), and he’s also owed a crapload of money over the next two seasons. And again, the Brewers already have a logjam in the outfield! Kemp is an outfielder/designated hitter only.

So the Brewers must really, really like a prospect or two that the Dodgers are offering in this deal. Duarte has already said that top outfield prospect Alex Verdugo would not be involved in the trade, and there’s no way the Dodgers would give up stud pitching prospect Walker Buehler in this deal.

It will be interesting to see if the two sides can work something out here, and the prospect haul would surely answer a lot of questions we currently have on this rumor.