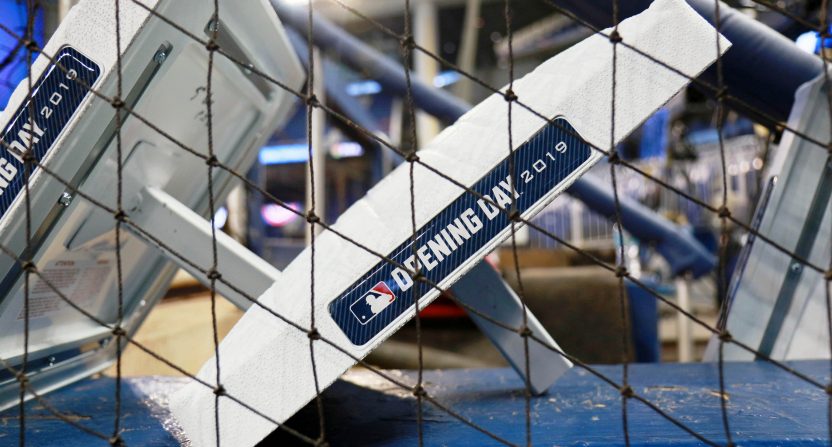 It’s Opening Day of the 2019 MLB season. HELL YEAH, LET’S DO THIS! Hope springs eternal for all 30 clubs, but that enthusiasm can be quickly tampered once you see your team’s Opening Day lineup. Here are five of this season’s most depressing MLB Opening Day starting nines, and I hope your team isn’t one of them.

The craziest thing about this Orioles lineup is that I don’t actually know the first names of about half of these guys. “Mullins” is Cedric Mullins, who hit .235/.312/.359 for the Orioles last year in 45 games. “Smith” is Dwight Smith Jr, acquired from the Blue Jays three weeks ago. Jonathan Villar and Trey Mancini are (gulp) Baltimore staples, as is highly paid first baseman Chris Davis (hitting seventh!) and former Rule 5 pick Joey Rickard. “Ruiz” is Rio Ruiz, acquired off waivers from the Braves in December. He owns a career .189/.282/.302 line in 72 MLB games. “Sucre” is long-time MLB backup catcher Jesus Sucre, with a slick .223/.259/.308 career slash line in the majors, and “Martin” is Richie Martin, a 24-year old making his major league debut, claimed off waivers from the A’s in December. Andrew Cashner is starting, and the less said about him, the better.

Losing long-time starting catcher Salvador Perez to Tommy John surgery before Opening Day hurt, but let’s face it – the Royals weren’t going to be good anyway. The top half of the lineup is somewhat respectable, then it tails off in a hurry. Opening Day first baseman Frank Schwindel was actually sent to minor league camp three days ago, and is starting in place of Ryan O’Hearn because of platoon splits against lefty Carlos Rodon. Owings is a good glove guy who slashed .250/.291/.378 in his 580 game career with the Diamondbacks. Martin Maldonado is a long-time backup catcher that is just fine in a pinch, while Billy Hamilton cannot hit at all (.245/.298/.333 in 690 games with the Reds), but is Really Fast. On the mound is Brad Keller, a Rule 5 pick from a year ago that had a good rookie season last year.

We’re a long ways away from the days of Cain, Hosmer, and Moustakas, folks.

Our team. Our City. Let’s do this, #JuntosMiami.

From Ozuna, Yelich, and Stanton to Herrera, Brinson, and Cooper – the story of the Miami Marlins. Rosell Herrera was a waiver claim from the Royals this winter who has also spent time with the Rockies and Reds, and hasn’t hit in 86 career MLB games (.234/.286/.317). Lewis Brinson was the prize piece in the Christian Yelich trade and is coming off a truly shocking rookie season where he hit .199/.240/.338 for Miami. Garrett Cooper is a 28-year old ex-Yankee that has primarily played first base and has slashed .276/.325/.382 in 27 career MLB games. Just for the hell of it, first baseman Martin Prado has also been missing in action over the last two years, playing a total of just 91 games, and starting pitcher Jose Urena is best known as “the dude who threw at Ronald Acuna in the first inning of a game last year.”

This is actually a similar lineup to last year, minus the outfield. And let’s be honest here – this is a bad outfield. Last season, the Giants started Hunter Pence in left, Austin Jackson in center, and Andrew McCutchen in right. Pence is now a Ranger, Jackson is in free agent purgatory after spending last season with three teams, and McCutchen is in Philadelphia. Their replacements are Steven Duggar, who hit .255/.303/.390 as a rookie last season in San Francisco, Connor Joe, who spent last year with the Dodgers’ AA and AAA teams, and Michael Reed, who has played 22 games in the majors over three seasons and spent most of last year in AAA with the Braves.

Contrast those feelings with the downright glee across the field for the Padres (Machado! Tatis! Hell, Hosmer and Myers and Kinsler!), and the script really feels flipped from recent years.

The wait is FINALLY over!

This isn’t the worst lineup ever, but…there’s no Vlad Jr (health issues not withstanding), so Blue Jays fans won’t be happy. And this lineup also shows the half-assed way that Toronto went about their rebuild – why is 32-year old Justin Smoak still around? Shouldn’t the Jays have tried harder to trade Marcus Stroman, who will be a free agent after 2020? Are Kevin Pillar and Randal Grichuk really for the next two seasons with the Jays?

This just feels like a missed opportunity for the Jays to commit to a direction either way. Go full rebuild, or try to compete – don’t half ass it!

1 thought on “The five most depressing MLB Opening Day lineups”