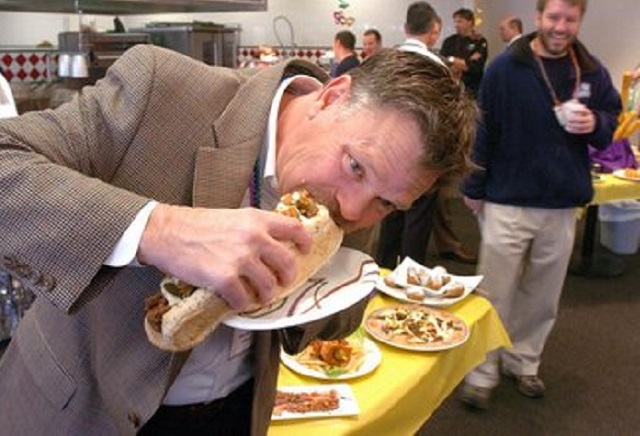 The race to clog the arteries of baseball fans heats up every year around this time, when teams unveil their newest culinary creations for the upcoming season. This year was no exception; in fact, teams seemed to step it up a notch in the race to have the craziest food item in all of baseball.

Here’s a look at 10 of the best, the worst, and the absolute grossest foods you’ll find at the ballpark this year. Stock up on Tums. 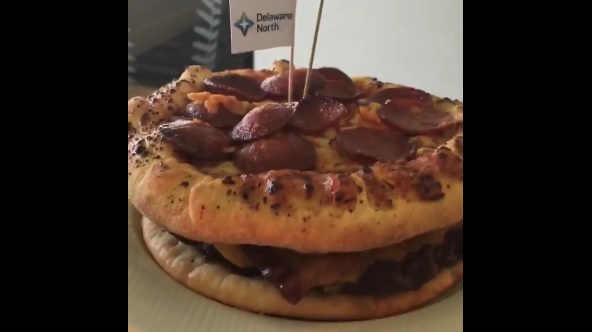 For years, many of the country’s top minds have been trying to figure out how to make a cheeseburger worse for your health. They finally had a breakthrough this year: instead of a hamburger bun, why not put it between two pepperoni pizzas? Done. The Braves have a few entries on this list, but it’s hard to top the Burgerizza for sheer gluttony and the potential to give you a heart attack immediately after consumption. Does it even taste good? That’s a stupid question, of course it does. 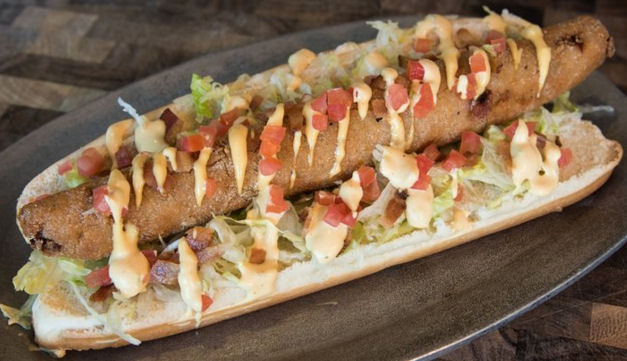 For the third straight year the D-Backs hit us with a weird hot dog-inspired, uh, thing. Ground up charred burgers with bacon and green onions, deep fried in the shape of a hot dog, topped with more bacon, lettuce, tomato, and a special sauce, all on a bun. It’s probably really good and really, really bad all at once. 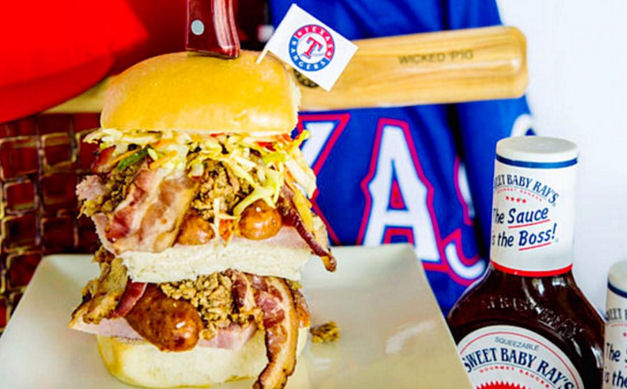 It’s $27! You get a lot for your money, though: a double decker pork party consisting of ham, pulled pork, bacon, sausage, and prosciutto, covered in barbecue sauce, then topped off with pork rinds and coleslaw, all on a Hawaiian roll. Is it wise to order a sandwich that will likely spill out all over the place in the stands? Probably not. But at least it comes with a knife and fork. 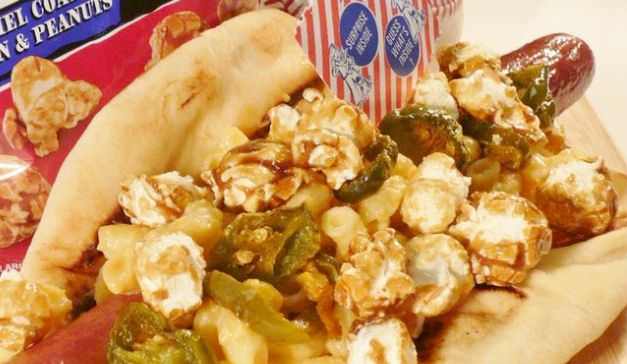 By far, the weirdest of this year’s new food offerings and that’s saying something. It’s a hot dog topped with mac and cheese, Cracker Jack, jalapenos, and caramel sauce, wrapped in naan bread, served with a pack of Cracker Jack on the side. Why? Who thought this was a good idea? Why would you put caramel sauce on a hot dog? And why naan? Is that supposed to class it up? This is a disaster. 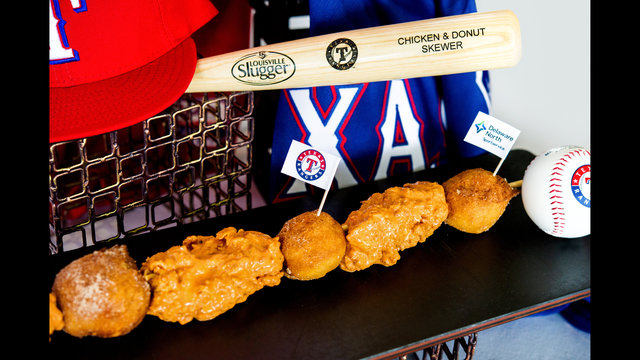 Chicken and waffles are over, my friends – it’s time to make room for chicken and doughnuts. Drizzled with buffalo honey sauce, this seems like a combination that just works. It’s available in a 12-inch skewer with the promise of a 24-inch version still to come. What a day that will be, when you’re able to order two feet of fried chicken and doughnut holes. 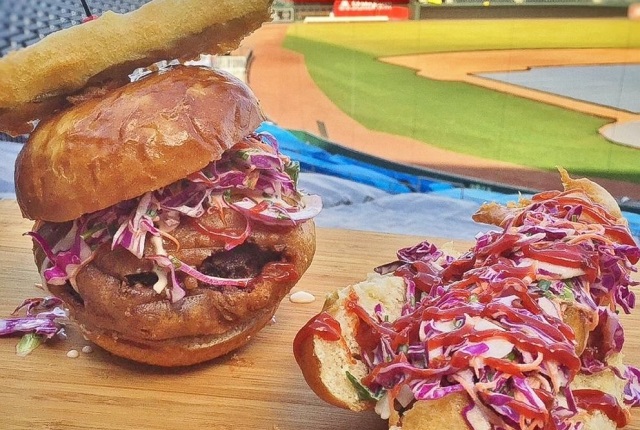 This looks like something you’d order off the menu of a trendy new casual place without hesitation. A tempura-battered, cheddar-stuffed bacon burger topped with sweet slaw, chipotle ketchup and a fried pickle served on a fresh roll. Man alive, does this look good. There’s a hot dog version, too. 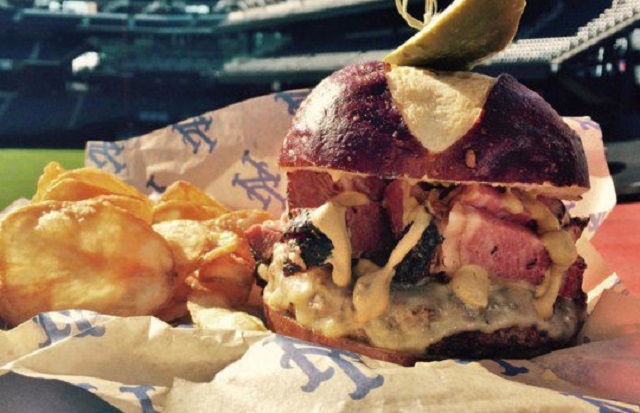 Everything is better with pastrami, including this cheeseburger new at Citi Field this year. It’s topped with melted Havarti cheese and served on a hearty pretzel bun, a smart move for a burger with this much stuff in it. It looks like it’s served with kettle chips, which might push this burger over the top as the most appealing new item this spring.

Say hello to T.E.D. (The Everything Dog). Part of your new @Braves dining experience. pic.twitter.com/psggppPi4s

The trend of just throwing things together and calling it a special new food item may have reached its nadir here. The Everything Dog (T.E.D.) is a hot dog topped with fries, chips, chili, beer cheese, jalapenos, popcorn, and Coke-infused BBQ sauce. None of these things particularly go together, and it seems like whoever thought this up just threw on whatever was laying around the kitchen at the time. It’s too much! It’s just too much. 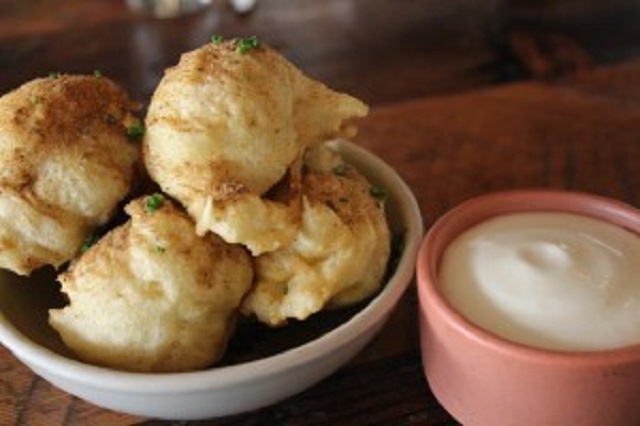 Porcini mushrooms are amazing, and in doughnut form they probably taste like the best mushroom bread every made. They’re served with a side of raclette dipping sauce, which is a Swiss cheese known for its melting qualities. This seems way too fancy for a ballpark, but it’s San Francisco, so. 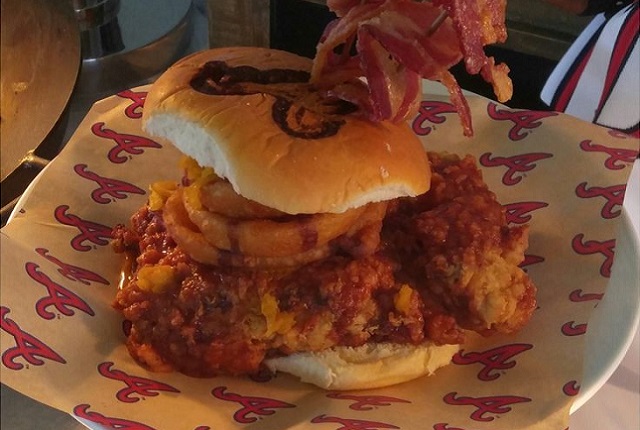 The Braves need to stop. A rib meat sandwich is fine, and the Braves logo on the bun is pretty cool. Onion rings and bacon on top, eh, that’s pushing it. But then the finisher: a barbecue sauce infused with Monster energy drink. Regular sauce isn’t good enough? It has to be infused with a crappy energy drink taste? Enough, Braves.